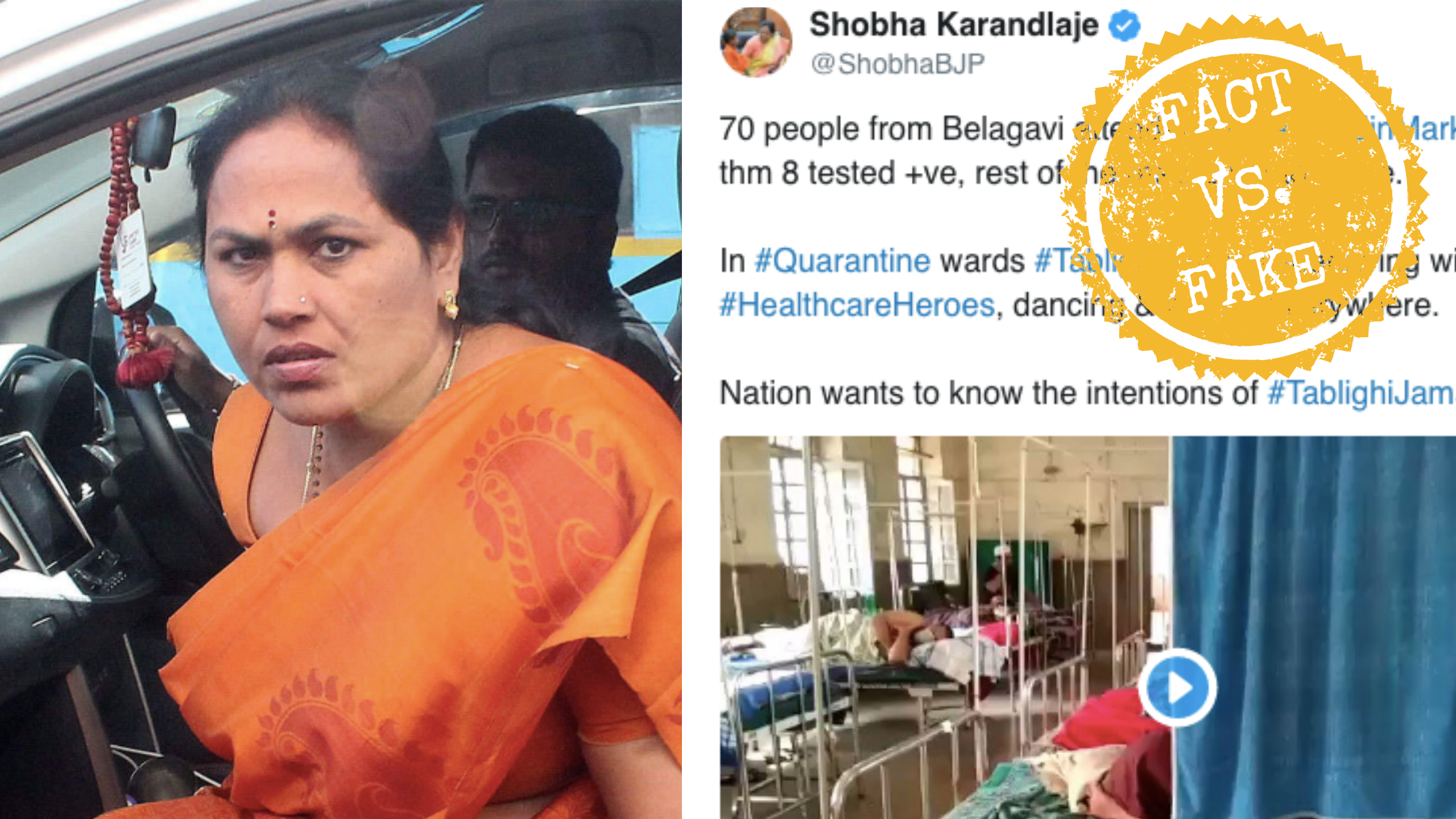 Habitual fake news peddler BJP MP Shobha Karandlaje on Monday took to her Twitter account to claim that people from Belagavi, Karnataka, who were quarantined after they attended the Tablighi Jamaat congregation in Delhi, were misbehaving and spitting at the staff of the hospital, they were lodged at.

“70 people from Belagavi attended Nizamuddin Markaj, among thm 8 tested positive, rest of the results yet to come. In quarantine wards, Tablighis are misbehaving with our health workers, dancing and spitting everywhere. Nation wants to know the intentions of Tablighi Jamaat!, (sic)” Karandlaje’s had claimed in a tweet.

70 people from Belagavi attended #NizamuddinMarkaj, among thm 8 tested +ve, rest of the results yet to come.

In #Quarantine wards #Tablighis are misbehaving with our #HealthcareHeroes, dancing &spitting everywhere.

However, this claim has been denied by Belagavi Deputy Commissioner SB Bommanahalli, who said that the Tablighi Jamaat members quarantined in the district were not spitting or misbehaving with health workers, The News Minute reported.

Dr Vinay Bastikop, Director, Belagavi Institute of Medical Sciences, in a detailed note also revealed that there were only 33 people admitted in the hospital that attended the Tablighi Jamaat in March and that the three people who tested positive were in a separate isolation ward.

“33 suspect cases of attendees of Tablighi Jamaat with travel history were admitted to BIMS hospital on 31-03-2020 since noon and swab samples of all were drawn on 01-04-2020 and they were advised quarantine under observation the samples were sent to VDRL Lab at Shimoga and the results were received on 03-04-2020 late evening following confirmatory results the 3 positive patients were each kept in a separate isolation ward and the remaining negative cases were discharged and along with help of District administration were shifted to quarantine facility outside the hospital and shall be followed up at the end of the quarantine period,” read a note by Dr Vinay Bastikop.

“The video aired on the channel has been filmed by the suspect cases themselves and should have been around the time when they were being separated from the COVID negative suspects. Mentioning that the positive patients are freely roaming within the hospital is not true, they have been kept in a separate isolation ward and have been counselled and medication has been started, regular follow up with the patients is being done on a daily basis, currently, they are on treatment keeping good health and are under constant observation,” stated the note by Dr Vinay Bastikop.

“The hospital management has personally interacted with all suspects and positive patients and counselled them in regards to maintaining hygiene and how to take protective measures,” the note by Dr Vinay Bastikop added.

Karandlaje, who is known for her hardline views against Muslims has a history of peddling fake news.

In 2017, she claimed that a young Hindu man Paresh Mesta had been mutilated and castrated and that boiling oil was poured over his head, and his head was split with a weapon. Her communal rumour mongering lead to tensions in the coastal region of Karnataka. Her claims were later debunked by the Kasturba Hospital in Manipal where the post mortem was conducted. The report said there was “no evidences of injuries caused by weapons over the body of the deceased”, “there is no evidence of castration or mutilation”, that the tattoo of a Hindu deity on his forearm was not destroyed, and that the change in the colour of the face of the deceased was due to putrefaction.

In 2019, she again courted controversy when she tweeted an image of 19-year-old Shivu Uppar, claiming that he was murdered and hanged for protecting cows from cow smugglers. Later, the youth’s post mortem report stated that he committed suicide, and was not killed.

In 2020, the Kerala police registered a case against Karandlaje after she claimed that Hindus from a colony in Kuttipuram in Malappuram district were denied water supply as they supported the Citizenship Amendment Act (CAA). It was later found that water was being provided to the people of the colony from a private person’s borewell. “This motor was taken for agricultural work and he was recently issued a warning by State Electricity Board. He was told that if he uses the motor for any other purpose, power supply would be disconnected. He then had stopped using the pump following the crisis worsened,” Aravindan E.A., SI of Kuttippuram police had clarified.