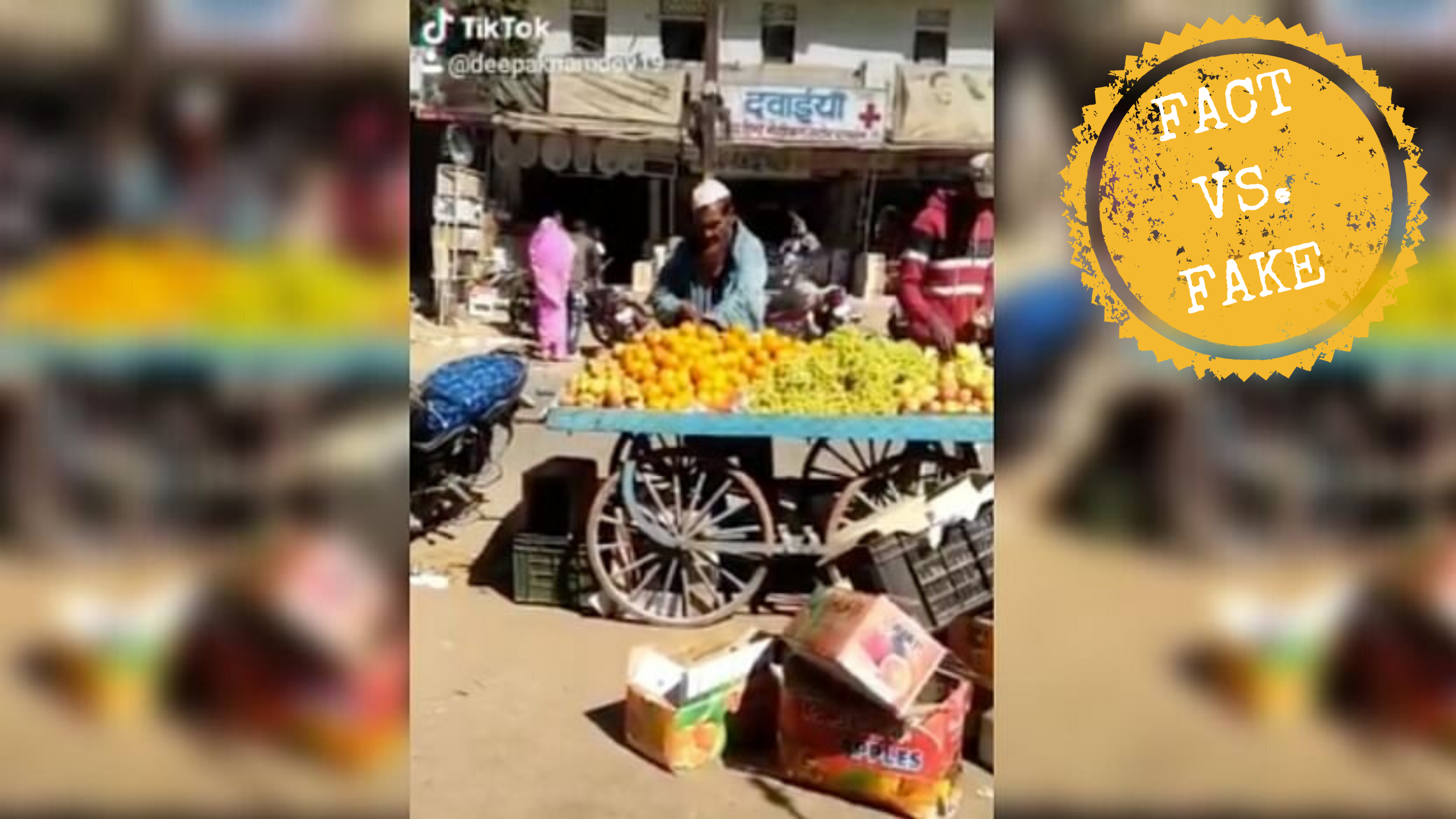 A video showing an old man with a skull cap selling fruits on a pushcart is doing rounds on social media with a claim that Muslims are spreading coronavirus in India. The video is being shared with the claim that the man in the video is spitting and putting his saliva on the fruits, thereby, infecting people.

The Cognate’s Fact Vs. Fake team found the video uploaded on YouTube on April 3, 2020, with a message that a ‘Muslim corona suspect’ was selling fruits, and asks Hindus to be cautious.

(Note: The uploader has disabled watching the video on external websites. You can still watch the video on YouTube.)

The same video was also uploaded on Facebook on the same date along with the following message: “Man at Work…Fruit vendor using his “spit “deliberately on fruits so that, it’s infects to general public PS: Don’t Buy from them (sic)”.

And also uploaded on Twitter by @desimojito, which was retweeted by more than 4000 users at the time of publishing this article.

This is next level. Be safe and careful people pic.twitter.com/OJhONjvUR3

The tweet received numerous hate comments all directed towards Muslims, with many calling for the boycott of the community.

Now only way is boycott them financially…

Who is the man, and what was he doing?

According to a report by The Quint, the man in the video now identified as Sheru was arrested in Madhya Pradesh’s Raisen district on Friday, 3 April, and was booked under sections 269, 270 of the Indian Penal Code. Section 269 of the IPC deals with negligent act likely to spread infection of disease dangerous to life and section 270 deals with malignant act likely to spread infection of disease danger­ous to life.

Monica Shukla, Raisen SP was quoted saying that the video is as old as 16 February. She was further quoted as saying that the police are yet to find out, why the old man was doing that.

In an interrogation with the police, Sheru has reportedly told them that he had never done anything as seen in the viral video. “I don’t know what happened to me. I was just putting the rotten fruits aside,” he told the police.

The police’s statement clearly shows that they are yet to find out why the old man was handling the fruits in that manner, however, even before their investigation social media has been flooded with hate messages against the entire community with false claims.

Since the day, Delhi’s Markaz Nizamuddin emerged as a coronavirus hotbed after numerous people who attended a Tablighi Jamaat meet in mid-March tested positive for the viral infection, there has been a deluge of false and malicious claims of Muslims spreading coronavirus in India.

Read: Video Of Restaurant Staff Blowing Into Food Package Is Not From India & He Was Not Spreading Coronavirus