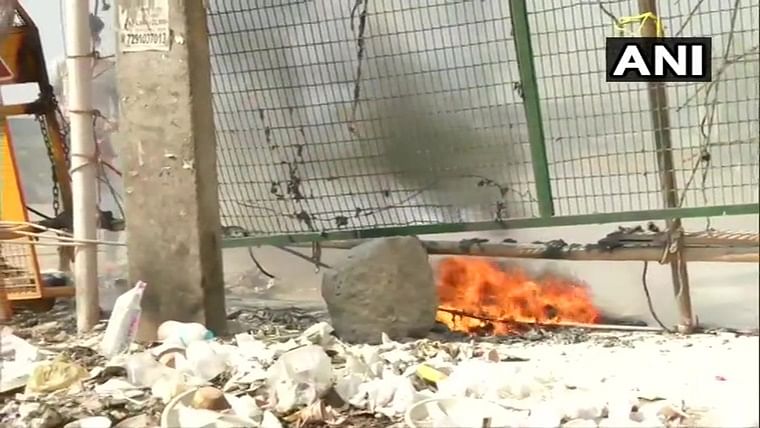 After orchestrating the deadliest anti-Muslim pogrom Delhi has witnessed in decades, a petrol bomb was thrown this morning near a police barricade at Shaheen Bagh, the epicentre of protests against Citizenship Amendment Act (CAA) by unidentified terrorists. Later a terrorist on a bike was seen throwing a crude bomb near Jamia Millia Islamia, about five km away from the protest site.

The attack comes on a day when millions across India are observing a “Janata Curfew” call by Prime Minister Narendra Modi amid a rising number of coronavirus cases.

“Petrol Bomb was thrown on barricades away from the (Shaheen Bagh) protesters, we have recovered some bottles used in the case and are investigating on it,” senior police officer Kumar Gyanesh was quoted as saying by news agency IANS. The incident took place at around 9:30 am.

“Two people were seen on a bike near the barricades, we are checking the CCTV footages for detailed investigation,” he added.

At Jamia Millia Islamia, an unidentified terrorist opened fire and hurled a petrol bomb at the protest site at Jamia Square, Gate No. 7 of the university.

The Jamia Coordination Committee (JCC), comprising current and former students of the university, in a statement, said that CCTV footage showed the terrorist in the get-up of a delivery boy with a helmet and three bags on his bike, due to which its number plate was not visible.

The students had temporarily suspended its sit-in protest on Saturday in view of the coronavirus outbreak.

This is not the first time terrorists opposed to the nationwide uprising against CAA & NRC have attacked the sit-in at Shaheen Bagh and Jamia.

On January 30, one Rambhakt Gopal Sharma carried out the shooting at the peaceful student protesters of Jamia Millia Islamia in the presence of the police. His Facebook posts revealed he wanted to carry out Jallianwala Bagh like large scale carnage at Shaheen Bagh.

On February 1st, another terrorist Kapil Gujjar opened fire at the protestors at Shaheen Bagh, before he was overpowered by police personnel and taken into custody. He had shouted Iss desh mein kisi ki nahin chalegi, sirf Hinduon ki chalegi (In this country, no one but Hindus can have their say),” and fired two rounds.

Gujjar was later released on bail by a Delhi court.

On February 23, an anti-Muslim pogrom was unleashed in parts of North East Delhi, which resulted in the death of over fifty people, hundreds injured, and thousands homeless.