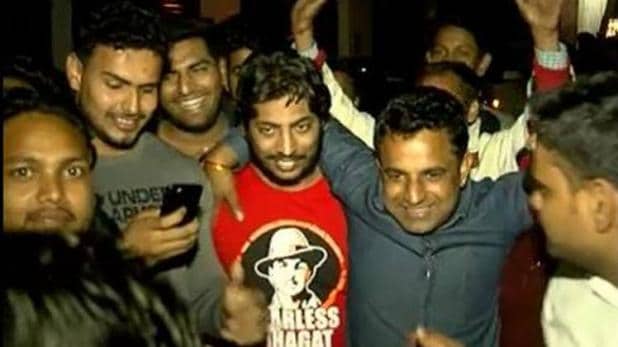 Kapil Gujjar, the fascist Hindutva extremist who opened fire in Delhi’s Shaheen Bagh area on February 1 was greeted with hugs and music from his sympathisers after he was released on bail by a Delhi court on Saturday.

NOT shocking, if true.#ShaheenBagh shooter Kapil Gujjar seems to have got a hero’s welcome. People condoning and applauding violence. Waah!

In the past we’ve seen union minister garland those accused of mob lynching.pic.twitter.com/SsJlf5YJ1f

Gujjar, who belongs to east Delhi’s Dallu Pura area, had on February 1 fired bullets in Shaheen Bagh, which has emerged as a centre of protests against the divisive Citizenship Amendment Act (CAA) and the proposed National Register of Citizens (NRC). Hundreds of women have been peacefully protesting at Shaheen Bagh since December 15.

Gujjar had shouted saying “iss desh mein kisi ki nahin chalegi, sirf Hinduon ki chalegi (In this country, no one but Hindus can have their say),” and fired in the air.

The incident had occurred two days after another Hindutva terrorist Rambhakt Gopal Sharma had shot at the peaceful student protesters of Jamia Millia Islamia in Delhi. His Facebook posts had revealed that he wanted to carry out Jallianwala Bagh like large scale carnage at Shaheen Bagh.

The court let him off on bail on Friday on a bail bond of ₹25,000 and a surety of similar amount, despite police strongly opposing the bail application and contending that the allegations against Gujjar are serious in nature and that the investigation in the case is still at an initial stage.

Gujjar’s lawyer Narveer Dabas, however, told the court that his client will not tamper with the evidence or influence the witnesses in the case.

Days after his arrest, the Deputy Commissioner of Police (Crime Branch) Rajesh Deo had claimed that Gujjar had links with the Aam Aadmi Party (AAP) based on photographs recovered from his phone in which Gujjar and his father can be seen with prominent leaders Sanjay Singh and Atishi.

Gujjar’s release has been widely criticised by people on social media.

#KapilGujjar Terr0rist Kapil Gujjar is granted bail even though he fired bullets at the women of Shaheen Bagh #DrKafeelKhan Dr. Kafeel Khan is still jailed even though he saved children of Gorakhpur

Delhi court grants bail to Shaheen Bagh shooter Kapil Gujjar – Of course, so that he can go and do some more shooting practice https://t.co/4GfKufTbLf

Kapil Baisala (Gujjar) who opened fire at #ShaheenBagh protesters on February 1, gets a hero's welcome after getting bail.

This is how #BJP & #RSS glorify murderers & rapists.

Kapil Gujjar on returning home after getting bail

this is what it has come to , to possible future terrorist getting a heroes welcome .

this is @narendramodi VIKAS