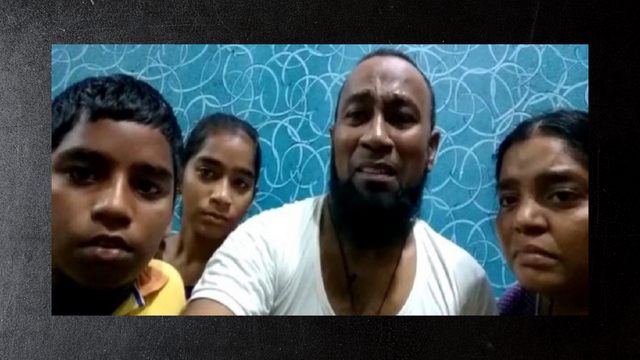 A Muslim family of four committed suicide in Nandyal town of Andhra Pradesh. Before taking the extreme step, the family members filmed a video in which they alleged that they faced constant torture by the police, hence forcing them to end their lives.

The news has resulted in the arrest of two policemen – Circle Inspector Somasekhara Reddy and Head Constable Gangadhar, on charges of abetment to suicide.

The head of the family Sheikh Abdul Salam said in the video that he was falsely being linked to two crimes he had not committed.

Abdul Salam, his wife Noorjehan who was a private school teacher, their daughter Salma, 14, and son Dadhi Khalandar, 10, died by coming in the way of a moving train on November 4. The railway police found their dead bodies in Kowlur village in Panyam mandal, close to Nandyal, The News Minute reported.

Abdul Salam had been working at a jewellery store in Nandyal, where an incident of theft was reported a few months ago. The owner of the store suspected Abdul Salam of having stolen the gold, and he was even sent to jail, according to reports. Even as he was released on bail and started to drive a rented auto, he was continuously harassed by the shop owner and by the police, his relatives allege.

A relative told NTV Telugu that after the gold theft, Abdul Salam was harassed and beaten badly by the police until he bled. “He came out on bail. When he would go (to the police station) to sign every month, he was abused very badly each time,” she said.

In the video that he recorded with his wife and kids, Abdul Salam says, “I didn’t do anything wrong. I have nothing to do with the theft that happened in the auto, or in the shop. I am unable to bear the torture. We have no one to help us. That’s why I hope at least my death will bring peace of mind.”

An inquiry has been initiated in the case, and Chief Minister YS Jagan Mohan Reddy has reportedly ordered authorities to investigate the case on a fast track basis. Inspector-General of Police Sankha Brata Bagchi and IPS officer Arif Hafeez are conducting the inquiry.

Leader of Opposition Chandrababu Naidu said that the death of Abdul Salam and his family is an example that shows that Muslims are being harassed and false cases are being planted on them.

In this article:Andhra Pradesh, Featured, Suicide

The gruesome and bizarre murder of two young women by their own parents in Madanapalle in Andhra Pradesh as part of a superstitious ritual,...

In a tragic development, a 37-year-old Muslim man hanged himself to death in Himachal Pradesh’s Una district on Sunday morning after allegedly being taunted...