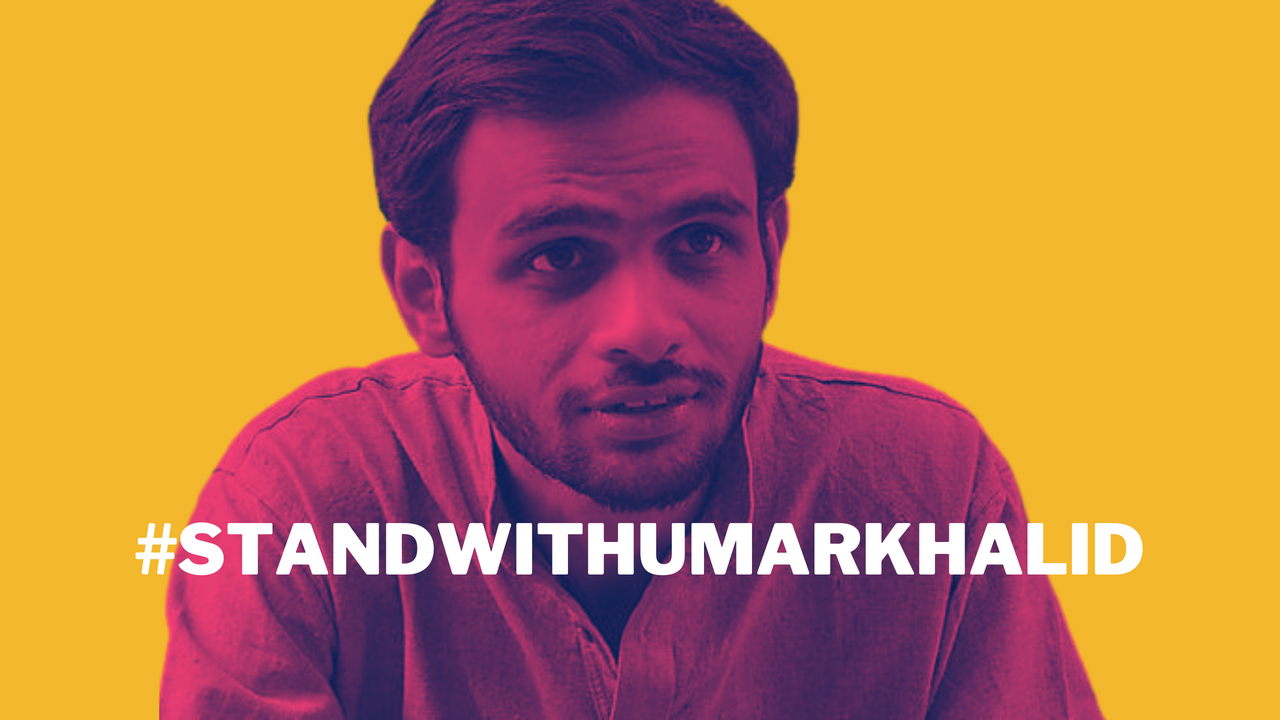 A Delhi court on Monday sent Umar Khalid to 10-day police custody day after the Delhi police arrested him under the draconian Unlawful Activities Prevention Act (UAPA) accusing him of “conspiring” in the anti-Muslim Delhi pogrom, which took place in the last week of February.

The Delhi police sought 10 days of police custody to question Umar with data as huge as 40GB, LiveLaw reported.

Umar is one of the many people who have protested against the Citizenship Amendment Act (CAA) to have been summoned or arrested in connection with the Delhi Pogrom, in which more than 50 people, mostly Muslims, were killed.

Police have accused Umar of meeting suspended and jailed Aam Aadmi Party’s councillor Tahir Hussain and activist Khalid Saifi on January 8 at the Shaheen Bagh sit-in protest site against the CAA & National Register of Citizens (NRC) to allegedly plan the riots. He has been interrogated twice in the last two months for his alleged role. The police have also linked Khalid’s speeches to the riots.

Appearing for Khalid before the Additional Sessions Court, Karkardooma, his lawyer Trideep Pais opposed the remand submitting that the police case was nothing but “empty rhetoric”.

Pais told the court during the virtual hearing that the police have to clarify where he gave the speeches and show the proof that his client asked people to come and protest.

“Being opposed to the CAA is not a crime”, Pais submitted. The lawyer further said that a frenzy was being created against Umar.

Umar’s father, SQR Ilyas, has accused the Delhi police of targeting those who participated in the protests against the CAA and NRC.

“This is nothing but an attempt to corner the activists and silence the voices of those who dissent against the government. The Delhi police have been trying to weave a false story by naming few people who participated in the anti-CAA-NRC protests, including Umar, as the ‘masterminds’ behind the north-east [Delhi] violence. However, everyone knows who was actually behind the riots.”

Swaraj India chief Yogendra Yadav called Khalid a thinking idealist and added he is shocked that an anti-terror law has been used to arrest the activist who has always opposed violence and communalism in any form. “He is undoubtedly among the leaders that India deserves. @DelhiPolice can’t detain India’s future for long,” Yadav said in a tweet.

Shocked that an anti-terror law UAPA has been used to arrest a young, thinking, idealist like @UmarKhalidJNU who has always opposed violence and communalism in any form.
He is undoubtedly among the leaders that India deserves.@DelhiPolice can't detain India's future for long.

Stand-up comedian and satirist said that he doesn’t believe a single lie they are fabricating against Umar.

Congress MP Shashi Tharoor also backed Umar Khalid and said that in today’s India, ‘payback is only reserved to our own citizens’, and not countries who ‘actually question and challenge our sovereignty’ of the country.

“PM says he welcomes criticism but forgets to mention the cost of criticism to be paid by those who speak out. In today’s India, payback is only reserved to our own citizens, never against countries who actually question and challenge our sovereignty,” Tharoor said in a tweet.

PM says he welcomes criticism, but forgets to mention the cost of criticism to be paid by those who who speak out. In today’s India, payback is only reserved to our own citizens, never against countries who actually question and challenge our sovereignty. #StandWithUmarKhalid https://t.co/zX9Ob318Ap

The violence is widely acknowledged as an anti-Muslim pogrom that was ignited after Bharatiya Janata Party (BJP) leader Kapil Mishra’s incendiary comments against the peaceful anti-CAA sit-in protests in the area. Mishra had demanded that anti-CAA protesters in Chand Bagh and Jaffrabad be removed within three days. If not, he had warned, his supporters would take matters into their own hands. Soon after, stone-pelting began in the area.

Video footage and eyewitness accounts have pointed to police allowing Hindu mobs to roam the streets freely to target the Muslim community.

A fact-finding report by the Delhi Minorities Commission has blamed Kapil Mishra’s speech for sparking communal violence in Northeast Delhi. A number of complaints have been filed in police stations in Northeast Delhi, alleging that he not only gave hate speeches in the area, he and his supporters also actively participated in the violence. However, he remains untouched by authorities.

NPR is the first step to creating a National Register of Citizens (NRC) which, according to the government would identify undocumented migrants residing in India. On December 24 last year, the Centre had approved Rs 3,941 crore for updating the NPR across the country and Rs 8,754.23 crore for conducting the 2021 Census.

Critics, however, believe that NRC coupled with the Citizenship Amendment Act (CAA) will be used to single out Muslims and render them stateless.

According to CAA, members of Hindu, Sikh, Buddhist, Jain, Parsi and Christian communities who have come from Pakistan, Bangladesh and Afghanistan till December 31, 2014, and facing religious persecution there will not be treated as illegal immigrants but given Indian citizenship. The Act intentionally leaves out Muslims.

Since December, India has witnessed unprecedented protests against CAA and NRC, compelling several states, including Kerala, Telangana, Rajasthan, Punjab and West Bengal to pass resolutions in their Assemblies against CAA, NRC and NPR.