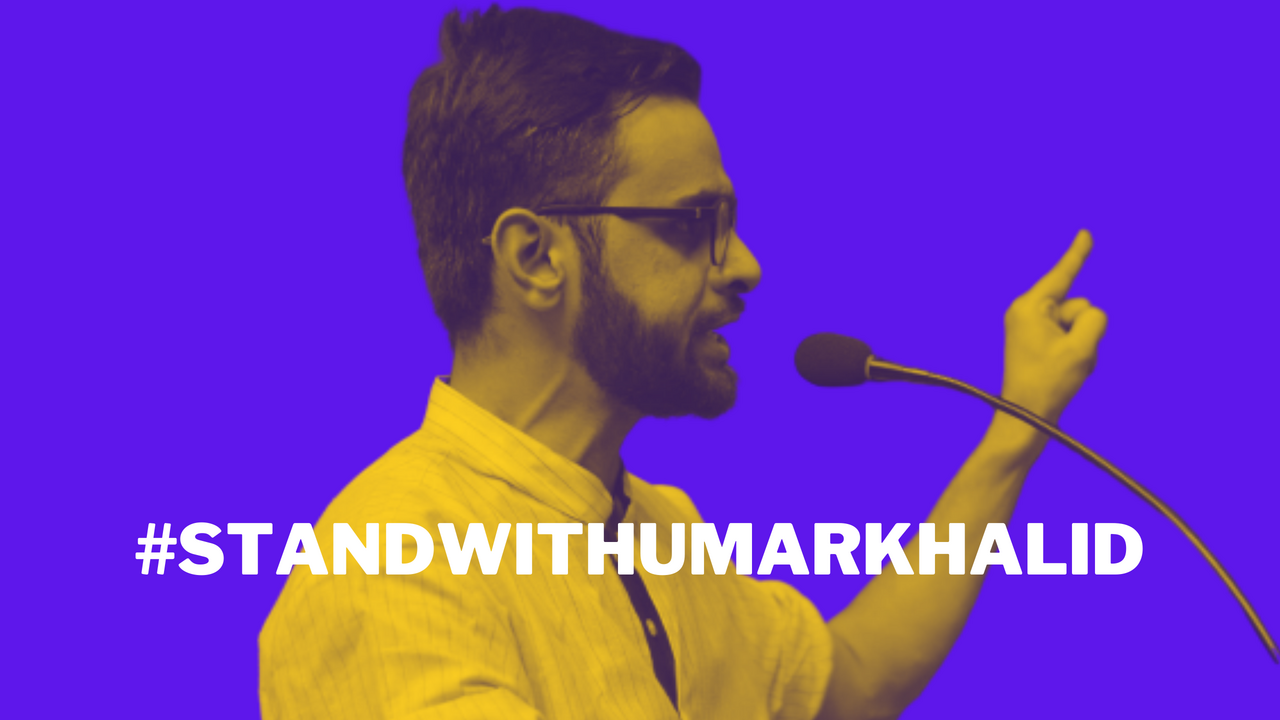 Former JNU student leader Umar Khalid was arrested on Sunday by the Delhi police for allegedly “conspiring” in the anti-Muslim Delhi pogrom, which took place in the last week of February.

My son Umar Khalid has been arrested tonight at 11:00 pm by Special Cell, Delhi Police under UAPA. Police was questioning him since 1:00 pm. He has been implicated in Delhi Riots. #StandWithUmarKhalid

NDTV quoted a member of the collective United Against Hate, of which Khalid is a part, as saying, “After 11 hours of interrogation, the Delhi Police Special Cell has arrested Umar Khalid as a conspirator in the Delhi Riots case. The fairy tale narrative that DP (Delhi Police) has been spinning and criminalising protests in the garb of investigating riots, finds yet another victim.”

Umar is one of the many people who have protested against the Citizenship Amendment Act (CAA) to have been summoned or arrested in connection with the Delhi Pogrom, in which more than 50 people, mostly Muslims, were killed.

As news of Umar’s arrest broke, a press statement issued by a group of rights activists, academics and lawyers described the political activist as “one of our bravest young voices who spoke for the constitutional values of our country” and condemned the police action against him as a ‘witch hunt’.

“As citizens deeply committed to constitutional values, we condemn the arrest of Umar Khalid who has been subjected to a malicious investigation targeting peaceful anti-CAA protestors,” the statement says. “With deep anguish we have no doubt in saying that this investigation is not about the violence in February 2020 in the national capital, but on the completely peaceful and democratic protests across the country against the unconstitutional CAA.”

The group said the “repeated attempts by the Delhi police to implicate [Khalid] in a number of fictitious cases of conspiracy for the Delhi violence are part of a brazen attempt to try to suppress his voice of dissent”. They also drew attention to the manner in which young people have been targeted:

“It is very significant that of the 20 arrested, 19 are under the age of 31. Of which 17 have been charged under the draconian UAPA and have been imprisoned on charges of a conspiracy for the Delhi violence whereas those who actually instigated and participated in the violence has not been touched. Of the ones incarcerated, five are women, except for one all are also students.

The essence of our democracy is the freedom of conscience and the strength of any country is in its young minds. We strongly condemn the targeting of Umar Khalid and other young activists, both women and men.”

They said that the right to life was “not just to be allowed to eat, live and breathe; it is to live without fear, with dignity and with freedom of expression, including dissent” and that the “objective of this witch hunt” the police has launched in the name of an investigation is “to silence democratic voices and instil fear.”

“We will react to hate with love.
When they threaten to hit us, we will hold the tricolour flag. If they shoot us, we will embrace the Constitution.

If they jail us, we will walk in singing Saare Jahan Se Achcha Hindustan Hamara.” #StandWithUmarKhalid pic.twitter.com/TNf6FQKOau

Umar Khalid in his ‘speech’ on the basis of which he is being framed talked about responding with peace and non-violence. Dr. Kafeel Khan speech talked about integrity and unity of the country. Keep this in mind and remember why they are being punished. #StandWithUmarKhalid pic.twitter.com/tWVpsLZQwk

If we don’t raise our voice against injustice we should feel ashamed of ourselves..

Komal Sharma maintaining physical distancing from Delhi police ever since the JNU attack.

But #UmarKhalid, and many more law abiding activists are arrested.

Umar Khalid’s arrest by Delhi police after naming Yechury, Yogendra Yadav, Jayati Ghosh& Apoorvanand, leaves no doubt at all about the malafide nature of it’s investigation into Delhi riots. It’s a conspiracy by the police to frame peaceful activists in the guise of Investigation

What has happened to our country. We were brave, we were decent, we were a democracy. This is so heartbreaking. #IStandWithUmarKhalid https://t.co/c0A864Zk2j