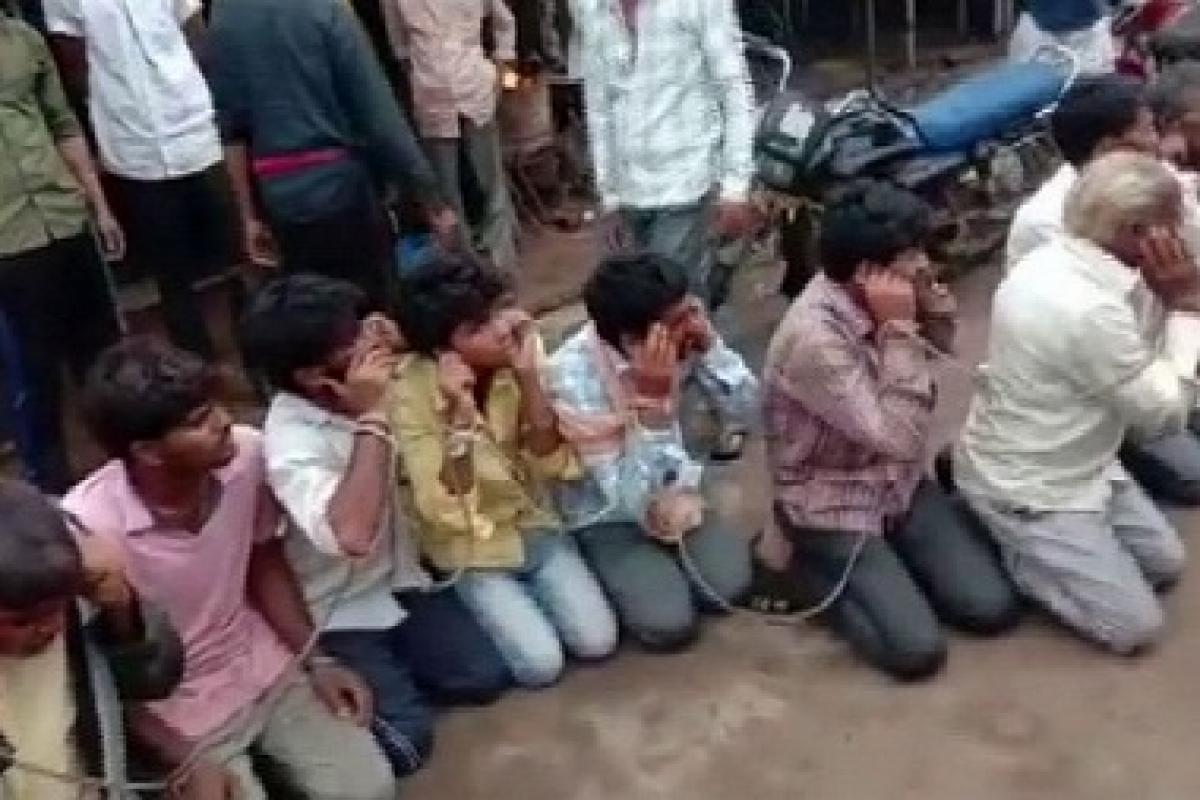 A group of 24 men were tied with a rope, thrashed and forced to chant “gau mata ki jai” in Madhya Pradesh’s Khandwa district on Sunday, July 7, for allegedly transporting cows to Maharashtra.

A video of the purported incident, shared by news agency ANI on Twitter, shows the men tied together with several villagers carrying sticks and forcing the men to do sit-ups, and chant “gau mata ki jai”.

#WATCH Several people tied with a rope and made to chant "Gau mata ki jai" in Khandwa, Madhya Pradesh on accusation of carrying cattle in their vehicles. (7.7.19) (Note – Abusive language) pic.twitter.com/5pbRZ4hNsR

The villagers who alleged that the men were transporting around 20 cattle for slaughter, paraded them through a two-km stretch to a police station in Khandwa district. The 24 men hail from Khandwa, Sehore, Dewas and Harda districts, and include six Muslims.

“We have booked the people ferrying the cattle without requisite permissions. We have also lodged a case against the villagers, including farmers, for ill-treating those booked for unauthorised cattle transport,” said Shiv Dayal Singh, Khandwa Superintendent of Police.

“Villagers brought the group transporting cows to our police station. We seized 21 trucks used for the purpose. The cows have been shifted to a shelter. They were taking the cows from Harda district in MP to Maharashtra,” said Inspector Harishanker Rawat of Khalwas police station.

This terrorist act comes a day before the start of the Madhya Pradesh Assembly session in which the Congress-ruled state government is likely to table an amendment in a law to curb violence in the name of cow protection. If passed, the bill will allow a fine of Rs 25,000 to Rs 50,000 and jail term between a year and five years for those who engage in violence in the name of cow protection.

The existing cow protection regulation has no provision of a jail term or fine.

In May this year, three Muslims, including a woman, were brutally beaten up by a gang of cow terrorists in Madhya Pradesh’s Seoni, a day before the election results brought the BJP back to power for a second term at the Centre.

In a video of the incident, shot by an eyewitness on a mobile phone, victims can be seen being pulled out from an autorickshaw and beaten with sticks. A female victim was also seen being hit repeatedly with a slipper on her head, covered with a piece of cloth, as she curled up on the gravel and took the blows in silence from the attacker who was heard yelling at her, “Jai Shri Ram”.

(With input from ANI, PTI)