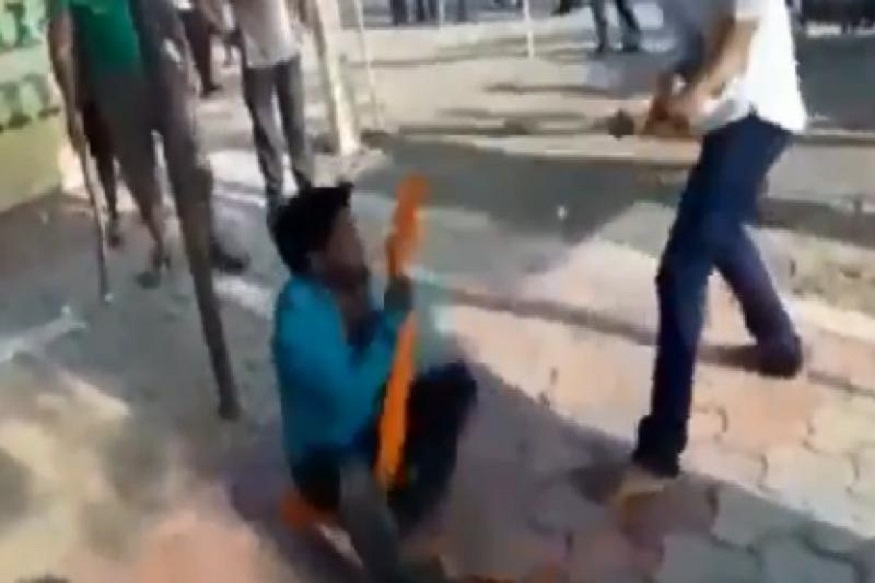 Screengrab taken from the video.

Three Muslims, including a woman, were brutally beaten up by a gang of cow terrorists in Madhya Pradesh’s Seoni, a day before the election results brought the BJP back to power for a second term at the Centre. The incident came to light, after the video of the attack, where the victims are being pulled out from an autorickshaw and beaten with sticks surfaced on social media.

Seoni lies 350 km away from Bhopal, where terror-accused Pragya Thakur just won the parliamentary election for the BJP.

According to reports, the three Muslims were thrashed by the terrorists and accused them of carrying beef in an autorickshaw. The men were tied to a tree one by one and thrashed by the group. The terrorists then forced one of the victims to hit the hapless woman with his slipper, while they yelled “Jai Shri Ram” at her. The entire incident took place in full public view, and none of the onlookers tried to stop the cowardly act.

The police said five men have been arrested from Seoni.

“The video is four days old and four people have been arrested. They have been sent to jail by a local court. One more accused has been arrested. He will appear in court today,” local police officer Lalit Shakyavar told NDTV.

According to ANI, the police named Ram Sena leader Shubham Baghel as one of the accused. Baghel posted the video of the incident on his Facebook account on May 23 and later deleted it. According to the police, Baghel has been book previously for his involvement in similar cases, reportedly along with his fellow cow terrorists.

Remarking that the incident marks the beginning of a “New India” under the second term of the BJP, AIMIM chief Asaduddin Owaisi tweeted:

This is how Muslims are treated by Vigilantes created by Modi voters welcome to a New India which will Inclusive and as @PMOIndia said Secularism Ka Niqaab …… https://t.co/Cy2uUUTirk

Further, Mehbooba Mufti said that she was horrified by the incident and hoped that the office of CM Kamal Nath takes swift action.

Horrified to see cow vigilantes thrash an innocent muslim with such impunity in MP. Hope @OfficeOfKNath takes swift action against these goons. https://t.co/2R78X0iy8M