Muslims Hit Back At PETA For Comparing Eid To Animal Cruelty
Advertisement https://pagead2.googlesyndication.com/pagead/js/adsbygoogle.js 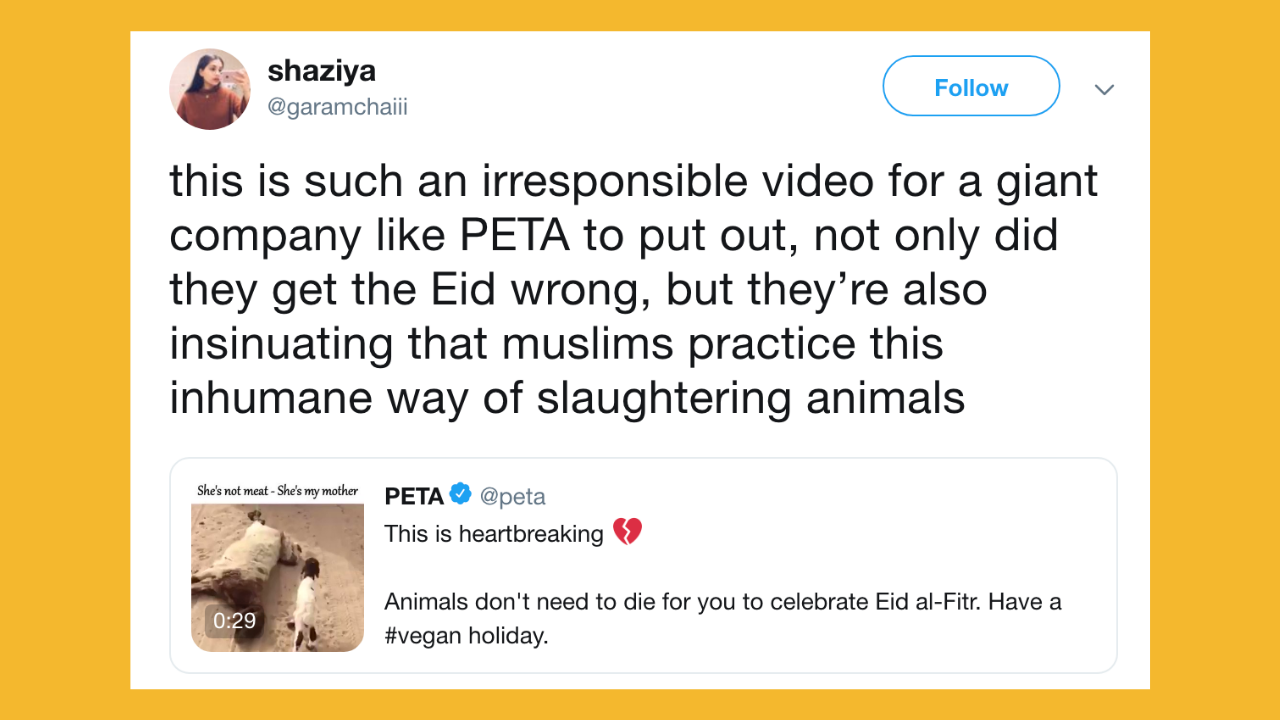 Animal rights group People for the Ethical Treatment of Animals (PETA) came under fire Thursday for posting a malicious and inaccurate video on Twitter, which compared Eid-ul-Fitr to animal cruelty.

The video shows a slaughtered goat being dragged along by a car, while its baby runs behind it helplessly. The video was accompanied with the tweet “This is heartbreaking Animals don’t need to die for you to celebrate Eid al-Fitr. Have a #vegan holiday.”

Animals don’t need to die for you to celebrate Eid al-Fitr. Have a #vegan holiday. pic.twitter.com/EwdvLeujlX

The tweet, which was posted by PETA’s international handle, was retweeted by PETA India.

Muslim Twitterati slammed the misleading post and asked the group to remove it, saying it legitimizes anti-Islamic hatred at a time when Muslims and their places of worship are under pressure from daily attacks.

Many pointed out the absolute insensitivity and lack of research behind the tweet and said the video goes against the Islamic practices when it comes to slaughtering meat.

First, we don’t drag goats around. Second, Eid isn’t about killing animals, it’s about giving to the people in need. People who have money usually buy a goat to give meat to the poor, not for fun. You can’t expect everyone to be vegan.

Imagine attacking muslims instead of wishing them a happy holiday. This is why you’re a joke PETA https://t.co/WMR9j8xkMh

this is such an irresponsible video for a giant company like PETA to put out, not only did they get the Eid wrong, but they’re also insinuating that muslims practice this inhumane way of slaughtering animals https://t.co/GWFEYpjdcd

Beyond @peta being totally off (and unapologeticall and arrogantly so) about which Eid this is, the above video is abhorrent and would be totally unacceptable by any Islamic standard, from the manner of the slaughter to the apparent sex of the animal — all wrong.

What’s also heartbreaking is @peta being islamophobic and spreading the wrong message. You already know that a) that’s the wrong Eid, and b) halal meat is the most humane and clean way to slaughter. Don’t tell us how to celebrate our religion thanks https://t.co/p0kwiceCzZ