Muslim Youth Tied To Tree & Beaten To Death By Hindu Mob In UP; 10th Such Incident Reported In A Month
Advertisement https://pagead2.googlesyndication.com/pagead/js/adsbygoogle.js 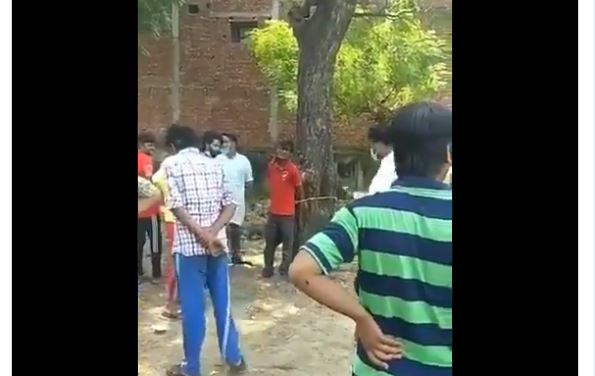 Basith Khan, a 32-year-old Muslim youth was ruthlessly murdered by a Hindu mob on false suspicion of theft. The mob tied him to a tree and thrashed him with punches and kicks for hours before he collapsed in Aonla village in Uttar Pradesh’s Bareilly district.

The incident took place on Thursday night and Basith breathed his last on Friday evening in a hospital in Bareilly.

“People assembled and dragged him to a nearby tree and tied him to it. Some of them even posed for mobile cameras while pouncing on Basith brutally,” Basith’s relative said. “He died of internal bleeding,”.

He added that Basith was handed over to the police and instead of taking him to hospital, the police dropped him home in a rickshaw and left.

The Bareilly police have registered a case against perpetrators in 147, 148, and 302 sections of the Indian Penal Code.

Only 4 days ago, on August 31st, 12- 14 men, armed with swords and guns stormed into a masjid in Alipur Khalsa village in Haryana. They attacked the Mosque’s imam – Mohammed Ihsan who sustained injuries on his head.

This happened in Alipur Khalsa, Gharaunda,Karnal,Haryana.

Mohammad Ahsan is an Imam of Mosque, he was attacked by an armed mob when he was in mosque, Ahsan alleged that attackers were carrying Swords, Rifles etc.

Police has registered an FIR. pic.twitter.com/U0EVruRo0U

Around 10 similar instances have been reported within August.

A Muslim truck driver was attacked by cow vigilantes in Telangana on the 27th, a similar incident in Rajasthan on the 17th and Reasi district in Jammu Kashmir on the 15th. A Muslim doctor was beaten by a local BJP leader in Bihar on the 13th, a Muslim journalist was attacked by a mob while reporting on harassment against Muslim women in North-East Delhi on 11th, a Muslim taxi driver was beaten up by extremists for refusing to chant “Jai Shri Raam” on the 7th and a mob threatened and insulted Muslim women in Northeast Delhi on the 5th.