Muslim Groom Ties Turban On His Wedding To Honour Sikh Community For Their Help During Delhi Pogrom
Advertisement https://pagead2.googlesyndication.com/pagead/js/adsbygoogle.js 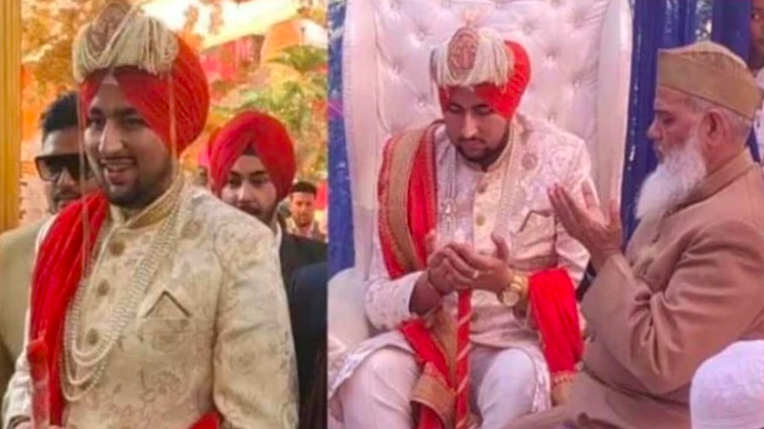 A Muslim bridegroom tied a Sikh turban on his wedding in Gidderbaha town in Punjab to honour the Sikh community for rescuing and helping Muslims during the anti-Muslim pogrom in Delhi.

The groom, Abdul Hakeem and his friends wore a turban on his wedding day on March 1 to convey a message of communal harmony and love towards the Sikhs, who helped Muslims and gave them food and shelter amid the violence in Delhi.

A wedding occurred in Giddharbah where a Muslim groom tied a turban in honour of Sikhs helping Muslims in Delhi riots.

The Muslim groom and over 100 plus Muslims in the wedding tied turbans for communal harmony.#DelhiViolance pic.twitter.com/LmprVg0s2y

Abdul’s father-in-law, Saleem Khan, was proud of the decision, and said, “People are still congratulating me, as it was a one-of-a-kind gesture. Abdul had told us in advance that he would sport a turban in the honour of Sikhs who rescued Muslims in Delhi and give the message of communal harmony. We were happy with his decision,” The Tribune reported.

The Tribune also reported him saying, “A true Muslim is identified not only by his cap but also by his honesty. In the same vein, a true Sikh’s identity is not only his turban but also his Gursikhi.”

During the Delhi pogrom, gurdwaras in the national capital were open for shelter to the riot victims. The International Sikh Charity, Khalsa Aid was also on the streets of Delhi, offering help to the victims.

These Sikh men in India traveled to show solidarity with Muslim men, in times of growing intolerance in the country. pic.twitter.com/4X22c2RY9v

Last week, Muslims and Sikhs amicably ended a decade-old land dispute in Saharanpur, when the Muslim community decided to forego its claim on a piece of land that had been purchased by the gurdwara management. The land dispute had led to riots in Saharanpur in 2014 and resulted in three deaths.