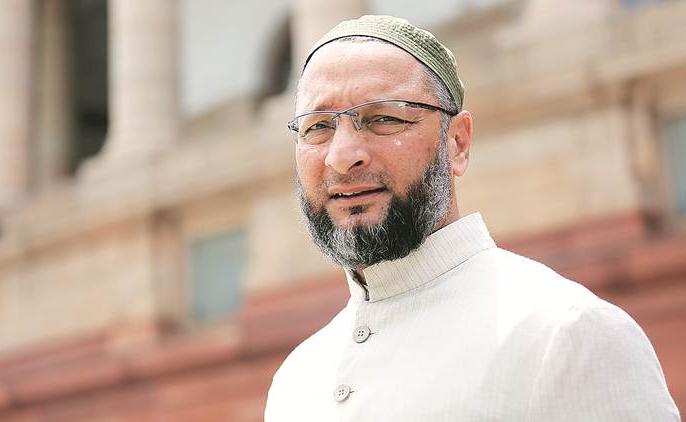 Slogans of ‘Jai Shri Ram’ and ‘Vande Mataram’ were raised in Lok Sabha, as All India Majlis-e-Ittehadul Muslimeen (AIMIM) chief Asaduddin Owaisi, elected from Hyderabad Lok Sabha constituency, was called in to take oath on Tuesday.

The Hyderabad MP, however, was unperturbed by what was clearly an attempt to bully him and instead immediately gave it back and said, “Jai Bheem, Jai Meem, Takbeer Allahu Akbar, Jai Hind.”

Today, I was welcomed with some slogans when I stood up to take my oath on the Constitution of India https://t.co/bQo1mTvjOK

Reacting over the “Jai Shri Ram” and “Vande Mataram” slogans being raised in Lok Sabha Owaisi said, “It is good that they remember such things when they see me, I hope they will also remember the constitution and deaths of children in Muzaffarpur.”

The MPs’ hooliganism did not go uncriticised.

An Independent MP from Amravati, Navneet Rana, reacted to the incident and said, “This is not the right place, temples are there for it. All gods are the same but targeting someone and taking that name, it’s wrong.”

BJP’s uneducated morons, sitting inside the holiest place for every Indian, started to mock Asaduddin Owaisi with slogans when he was taking oath.

Heckling an Elected MP with slogans is a shame on part or BJP .

With all that "bharat mata ki jai", for a second I thought they are going to lynch him. Phew! https://t.co/9ZYMxwFHKc

Amazed how scared BJP MPs are of @asadowaisi. Begin shouting BMKJ and Jai Shri Ram when he is about to take oath. He responds brilliantly with Jai Bhim, Allahu Akbar, Jai Hind. https://t.co/LZ7fw6ldYC

The oath-taking session of the newly elected MPs in the 17th Lok Sabha, which commenced on Monday, continued today. Prime Minister Narendra Modi was the first to take the oath, along with several prominent members such as Congress president Rahul Gandhi, Defence Minister Rajnath Singh, Home Minister Amit Shah, Textiles Minister Smriti Irani and Transport and Highways Minister Nitin Gadkari. Owaisi was one of the MPs who took oath as Lok Sabha members.