Karnataka BJP MLA Barks At Muslims, Warns Of Violence If Protests Against CAA Does Not Stops
Advertisement https://pagead2.googlesyndication.com/pagead/js/adsbygoogle.js 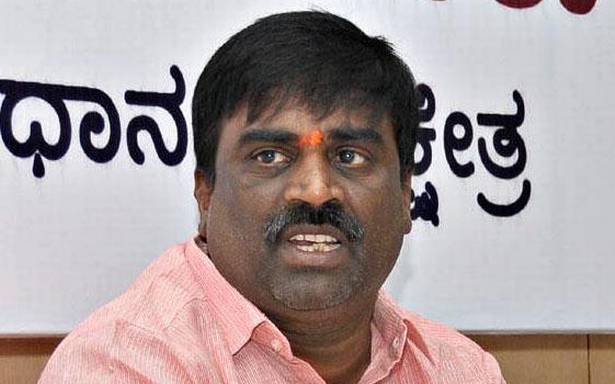 Karnataka BJP MLA Gali Somashekhara Reddy, launched a barking tirade at Muslims, in Ballari on Friday, warning of “Hindu wrath”, if the community does not stops protesting against the anti-Constitutional Citizenship Amendment Act and National Register of Citizens (NRC).

Somashekara Reddy is the brother of the Gali Janardhana Reddy, a former Union Minister and the prime accused in the 2011 multi-crore Ballari mining scam. Together, with another brother, the trio forms the infamous Reddy brothers, facing allegations of illegal mining, and high-level corruption. He is the legislator from Ballari urban and the former chairperson of Karnataka Milk Federation.

“This is my warning to you (Muslims), only 5 percent are here (at the event), if you create more trouble, if 100 percent of us come, you should understand what will happen to you,” said the hate-spewing extremist legislator.

“I warn people that if they are seen conducting any activity in Ballai against CAA or NRC, then they would be facing the wrath of Hindus. 17% of Muslims, will see the wrath of 80% Hindus,” Reddy said in his barking tirade.

The extremist legislator’s call for violence against Muslims has been widely criticised by people on social media, who asked why he is still not arrested.

"We are 80%, you are just 15%. Beware. You should listen to us if you want to live in our country else we will send you to your country"

BJP's Somashekar Reddy is threatening muslims in his speech in Ballari saying "we Hindus are 80%, you are only 17%, do not provoke us. If muslims want to stay in this country, they should follow our traditions". What is the punishment for inciting violence?? PM post??

As Mangalore Police files FIRs (selectively) on Muslim youth under sedition for sharing genuine videos on social media, this is @BSYBJP 's MLA & ex minister threatening to finish off minorities. This comes after CT Ravi's "warning". No action of course https://t.co/QgC9wZP0bD

Karnataka police what are you waiting for?
CT Ravi,somashekhar Reddy are openly threatening to the Muslims,why are these fellows out. Not a single action.
The public is cheering for his filthy speech. Why can't you identify from CCTV and videos and arrest all those?

MLA Somashekar Reddy, this is Our Country too. This country is not your family legacy. How😡dare you threaten any citizen, of India? U have the gall to speak this language b’coz u r in power? Be mindful, we voted u 2 power. U dare to😤lord over us?@PMOIndia #ProtestsAgainstCAA https://t.co/9oV9qhGw5C