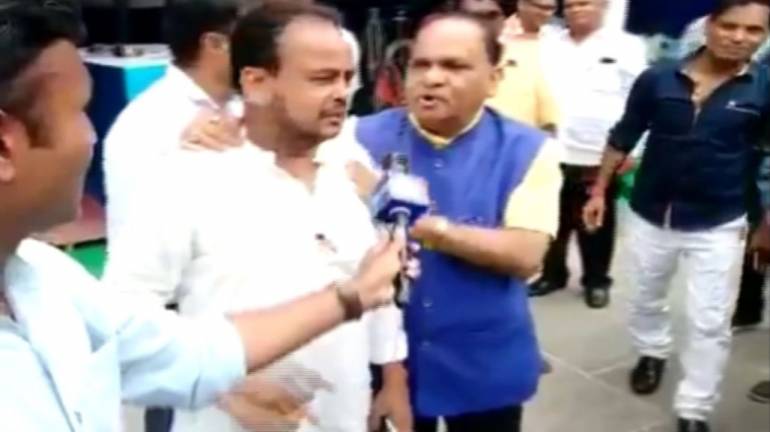 The slogan ‘Jai Shri Ram’ has become a tool in the hands of Hindutvadis to harass, threaten, humiliate and lynch Muslims, which has only intensified in the past few months. But the bullying is no longer restricted to attack commoners. Even elected representatives from the community are now a target.

On Friday, Jharkhand BJP minister C.P. Singh coerced Congress MLA Irfan Ansari to chant the slogan, and said that he (Ansari) was a “Ramwale” and not “Baburwale.”

A video clip of the incident was shot outside the Jharkhand Assembly, where the contemptible lawmaker of the BJP was seen getting into an argument with Ansari over the chanting of the Hindu slogan.

In the video, Singh is seen as saying, “I want Irfan bhai to once chant aloud Jai Shri Ram.” Then, he goes on to taunt Ansari, that, “Your ancestors were also [people who chanted] ‘Jai Shri Ram’ and not Taimurwaale or Ghori or Ghazni.”

To this, the seemingly poised and dignified Ansari is seen retorting, “Aap dara nahi sakte mujhe (you cannot threaten me),” and goes on to highlight that the country needs employment opportunities, electricity and development, and not politics over religion.

Viranchi Narayan, BJP legislator from Bokaro, raised the slogan of ‘Jai Shri Ram’, and it was soon followed b CP Singh and Minister of Labour, Employment and Training, Raj Paliwar. The lawmaker went on chanting the slogan as the JMM MLAs demanded government’s stand on proposed amendments to the Indian Forests Act, 1927. The House was adjourned twice due to the uproar.