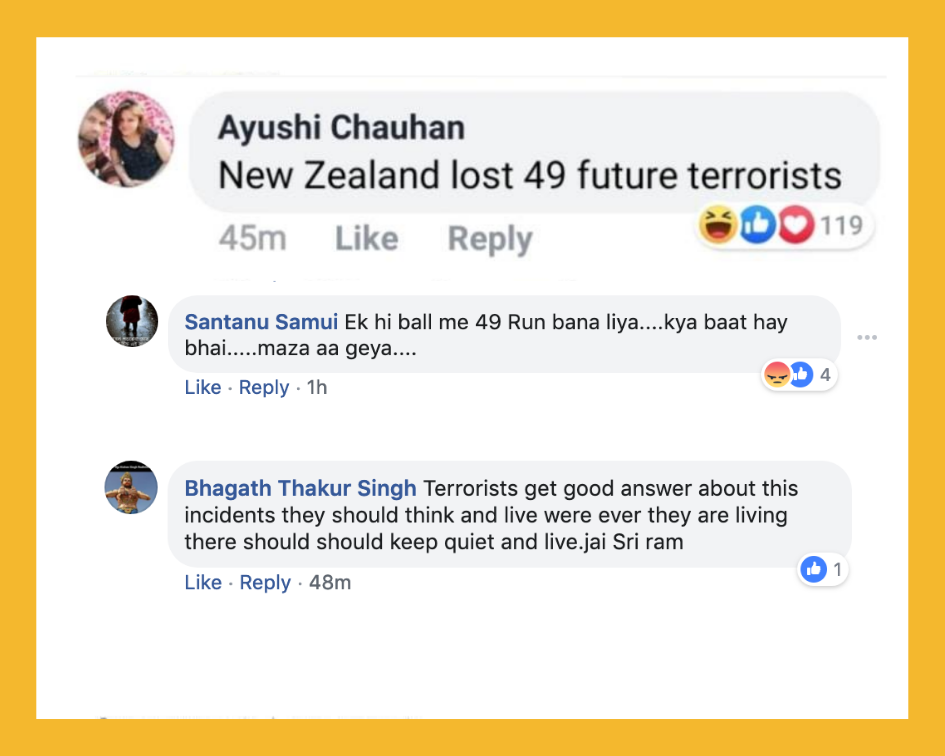 As the world mourns the deadly terror attacks on two mosques in New Zealand, that killed at least 49 people, anti-Muslim bigots in India are celebrating the shooting on social media.

49 people, including children and women, were killed in Friday’s attacks targeting the Al Noor and Linwood mosques in New Zealand’s worst ever terror attack. The terrorist, 28-year-old Australian, identified as Brenton Harrison Tarrant livestreamed his attack on Facebook, as he mercilessly gunned down innocent lives inside the mosques.

India’s right wing hate mongers have hailed the dastardly terrorist attack against Muslim worshippers as a ‘well deserved lesson’, and have praised the terrorist who carried out the attack as a ‘brave man’.

Posting her reaction to the attack, one Ayushi Chauhan commented that, “New Zealand lost 49 future terrorists”, in a mocking reference to the 49 Muslims killed.

Facebook and Twitter in India were filled with hateful comments against Muslims, with many praising the terrorist as a ‘hero’ for killing Muslims.

Somebody who attacks unarmed people offering prayers, is the worst kind of coward and deserves to go to hell.

Also, somebody who goes to a prayer-house to wish for the destruction of people of other faiths so his religion spreads to the entire world, is a part of the problem.

One christian maniac inspired by medieval age crusades does a massacre: This is result of nonstop hatred against Muslims. Poor Muslims. Victim Muslims. https://t.co/Kn6Pm8f648

A rising tide of venomous speech and attacks on Muslims is surging through India, that is tacitly encouraged by the country’s anti-Muslim political leadership. Muslims are systematically demonised as terrorists sympathisers, both by the political establishment and the country’s mainstream media, fostering widespread social legitimisation of anti-Muslim prejudice, hate speech and hate crimes.

The mother of the Christchurch mosque attack victim has written a book to help children come to terms with loss and trauma, cope with...