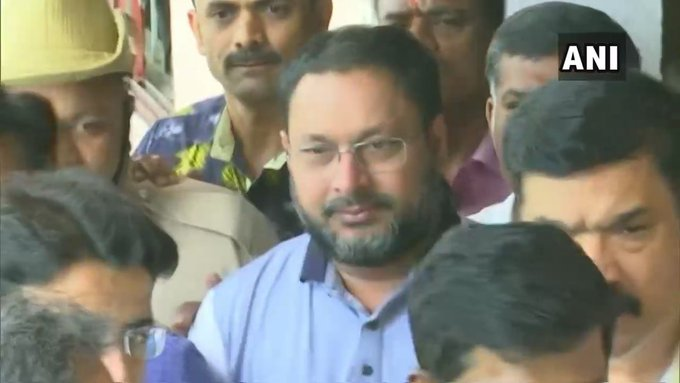 The designated Prevention of Money Laundering Act (PMLA) court in Bengaluru has sent Mohammed Mansoor Khan, prime accused in the multi-crore IMA scam, to the custody of Enforcement Directorate (ED) till July 23.

Khan, who had fled to Dubai, flew back to India and was arrested by ED officials after landing in New Delhi on Friday.

He was brought back to Bengaluru on Saturday and produced before a special Prevention of Money Laundering Act (PMLA) court, where the ED sought his custodial remand, officials said.

The Karnataka SIT had also demanded police custody of Khan on the grounds that they had arrested 23 accused in the case and Khan’s custody was required to establish the links, but the court sent him to ED custody.

The SIT had said its agents in Dubai persuaded Khan to come back and submit himself before the law.

Over one lakh people had invested in IMA, which had floated 17 companies, including jewellery stores infrastructure and real estate development firm, pharmacies, supermarkets etc.. The company promoted itself as a ‘Halal’ investment company and attracted a large number of investors from the city’s Muslim community. The company promised investors monthly returns on investments, which it said was ‘Shariah’ compliant.

So far, the SIT has arrested 22 people, including Khan, 12 directors of the firm, Deputy Commissioner of Bengaluru Urban district Vijay Shankar, Assistant Commissioner L C Nagaraj, a Bangalore Development Authority officer, a nominated corporator of the BBMP and a village accountant.

Before fleeing India, Khan had released an audio clip in which he purportedly threatened to commit suicide. In the audio, he had accused MLA Roshan Baig of extorting hundreds of crores for him, because of which his company had suffered losses.

Baig had categorically refuted the charge, terming it as “false and frivolous”.

The MLA, who has rebelled against his party, has since been suspended by the Congress for anti-party activities.