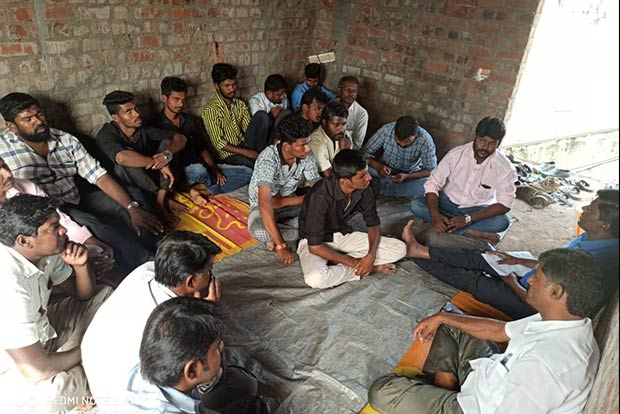 Members of Tamil Puligal at a meeting in Mettupalayam. Photo Source: DTNEXT

Nearly 40 years after 150 Dalit families in Tamil Nadu’s Meenakshipuram converted to Islam, thousands of Dalits in the state’s Mettupalayam have announced they will convert to Islam, citing caste discrimination and government apathy, in the mostly Hindu-dominated region.

Discriminated, denied, and arrested for demanding their rights, more than 3,000 members who belong or are linked to the Tamil Puligal Katchi, a Dalit political outfit, will be converting to Islam in multiple phases from January 5. The reason cited was the injustice meted out to the Dalits at Nadur village in Mettupalayam where 17 people were killed on December 2 in a wall collapse incident.

In the early hours of December 2, a portion of the over 15-foot high compound wall collapsed due to heavy rain, and crashed on the adjoining four tiled-roof houses in Nadur, killing 17 Dalits, including 10 women and two children.

The police arrested the building’s owner who had built the wall to separate his residence from that of the Dalits. The release on bail of the owner of the compound, and the continued imprisonment of their leader Nagai Thiruvalluvan, who along with others had staged a protest against the incident, were the reasons for the decision to convert, the organisation has said.

“The man who built this wall with no support pillars – Sivasubramanian, is out on bail 20 days after the death of 17 Dalits, but our leader remains in jail and the rest of us who protested were lathi-charged and multiple cases have been filed against us,” The News Minute quoted General Secretary of Tamil Puligal Katchi M Ilavenil as saying.

“The problem is not with the law or the way the Coimbatore Rural Police registered the cases; it has to do with the fact that the affected people are Dalits and they being denied their rights and self-respect. This will change if they exit Hinduism to embrace Islam, the organisation’s State spokesperson M. Muthukumar told The Hindu.

“It is our Muslim brethren and former Tamil Puligal members who have converted to Islam who have stood with the Dalits of Nadur right from the day of the tragedy. They are showing solidarity with us and the religion [Islam] preaching equality is what has drawn us towards them,” he added.

He further said that by embracing Islam, the Dalits do not mind giving up their reservation of protection under the Act. “When the very Act has failed to protect us, Dalits, in the Nadur incident what is the guarantee that it will in the future. Likewise, reservation is fast losing significance as the government is on a privatisation mode.”

This is not the first time, Dalits who have faced caste oppression are converting to Islam.

In 1981, Meenakshipuram, a small village near Tenkasi in Tamil Nadu’s Tirunelveli district, leapt into the national limelight when half the Dalits there converted from Hinduism to Islam. According to Thol. Thirumavalavan, the Dalit politician and a Lok Sabha MP from Tamil Nadu, the Dalits who converted to Islam in Meenakshipuram, are “faring well on the socio-economic front, and have come out of the stigma and discrimination imposed on them by the caste system.”

For Dalits, conversion from Hinduism is an act of rebellion against upper-caste supremacy, and thousands of years of oppression.