Conference on Cow Calls For Renewed Unity Among Muslims and Dalits to Fight Divisive Politics of the Sangh Parivar
Advertisement https://pagead2.googlesyndication.com/pagead/js/adsbygoogle.js 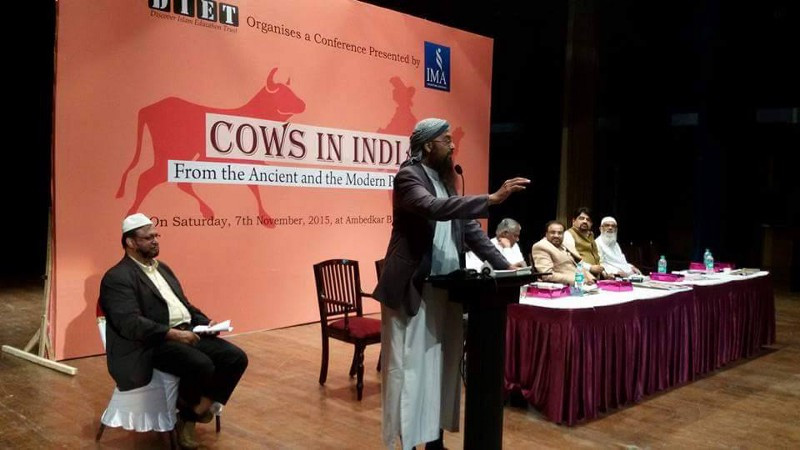 Bengaluru: Muslims and Dalits should join hands together to thwart the evil designs of the RSS led Sangh Parivar, the speakers at the conference held here on Saturday on ‘Cows in India: From the Ancient and the Modern Perspective’ have appealed.

The conference which was jointly organised by Discover Islam Educational Trust (DIET) and I Monetary Advisory (IMA) called for a renewed unity among both the communities, in the wake of increased incidents of communal attacks across the country after Narendra Modi-led BJP Government came to power at the Centre.

Killing cows, or consuming beef is not the issue. The issue is a political one, and cow is only a garb under which this spiteful game of violence is played out, the speakers said.

Prof. M. H. Jawahirullah of the Tamil Nadu Muslim Munnetra Kazagham, Adv. Sridhar Murthy, Dr. Shuaib Sayyed and DIET’s president Mr. Umar Shariff pointed out the various texts in the Hindu scriptures, especially the Vedas, which talks about the practise of beef consumption among Indians, including the Brahmins, much before the advent of Islam in India.

They said while one must respect the sentiments of those who worship cow and regard her as their mother, however, no one, including the government, has any right to interfere in the personal dietary preference of people.

Dr. Dominic Dixon of Ethos Institute said it is shameful that we are discussing cow in 2015, while, in other parts of the world, people are discussing equality and employment opportunities.

Journalist Santosh Bhartiya asked the community to be cautious and do not get swayed by either the Sangh Parivar or Muslim community leaders, who he derided as agents of their respective political parties.

Former Karnataka Agriculture Minister, Mr. Bandeppa Kashempur and Dalit activist Mr. Narayan Rao called for greater unity among Muslims and Dalits to defeat the oppressive and bigoted politics of the dominant castes, who form the ruling BJP and its ideological backers.

Minister for Infrastructure Development, Information and Haj, Mr. R. Roshan Baig, who was advertised as one of the speakers did not turn up to the event, for reasons unknown.