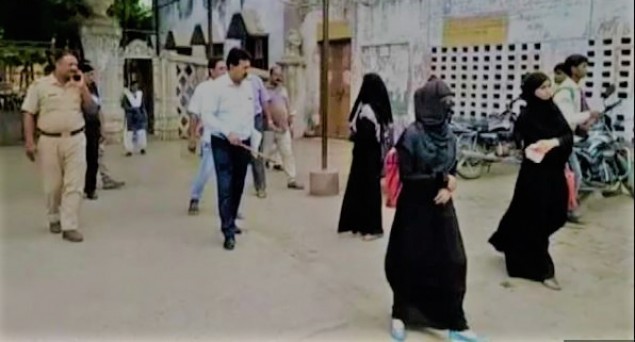 A college in Uttar Pradesh’s Firozabad district has banned students from entering the institution’s premises wearing a burqa and has even threatened them with batons.

The management of SRK College has justified the ban saying that burqa is not part of the college dress code and hence the entry of students wearing it will be banned. Reportedly, the ban came into effect in the wake of a recent clash between two student groups. The college administration said that it has set a new dress code for students.

But the college administration’s diktat has not stopped with only interfering in religious practices. The situation worsened on Monday when the college’s principal Bhaskar Rai wielding stick in his hand stood at the main entrance of the institution and drove away the hijab-clad students when they tried to approach the college gate.

“This is an insult to Muslim girl students. The girl students in hijab should have been allowed to enter the college and provided a place where they can remove their hijab and go to their classrooms and put on hijab again while going back to their homes. If someone is not found in college dress, then she should be sent back. But sending them away from outside the college without confirming whether they are in college uniform or not, is not proper. It is also not at all acceptable for the college principal to stand at the gate holding a stick and send the hijab-clad girls away,” news website India Tomorrow quoted local resident Qazi Ishaq Gora as saying.

Meanwhile, the police have been deployed at the college, who have asked Muslim girls to remove their hijab at the local bus stand before coming to the college.