Sunita Singh Gaur, leader of the BJP’s Mahila Morcha in Ramkola in Uttar Pradesh, has been suspended from the organisation, after her criminal and hateful comments against Muslim women went viral on social media, drawing severe backlash. Sunita Singh in a Facebook post last week said that Hindu men should enter the homes of Muslim women and rape them.

According to her Facebook post, which now stands deleted, Gaur said: “There is only one solution for them (Muslims). Hindu brothers should make a group of 10 and gang rape their (Muslims) mothers and sisters openly on the streets…and then hang her in the middle of the bazaar for others to see.”

Gaur added that “If we need to protect India then Hindu men must rape Muslim women.”

“There is no other way,” she added. 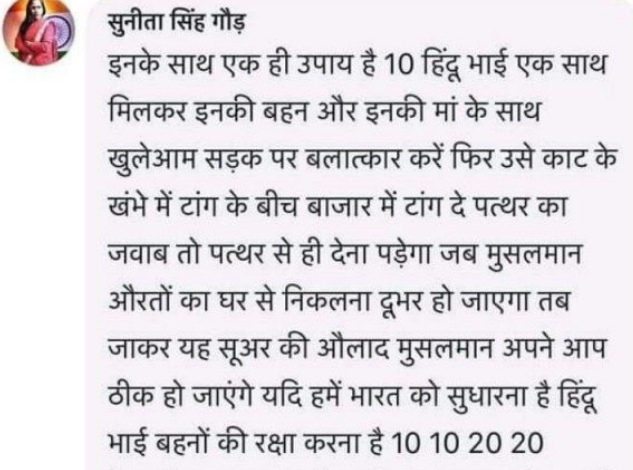 Responding to her criminal comments, Vijaya Rahatkar, national president of Mahila Morcha, said: “Be assured, BJP Mahila Morcha will not tolerate any hateful comments whatsoever from any karyakarta. The lady in question has been expelled even before you tweeted.”

Be assured, BJP Mahila Morcha will not tolerate any hateful comments whatsoever from any karyakarta. The lady in question has been expelled even before you tweeted. pic.twitter.com/r4xIx6AHGG

According to the press release that Rahatkar posted alongside her tweet, Gaur was expelled on June 27.

This is not the first time, BJP leaders have instigated rape and violence against Muslim women. In 2015, one BJP leader called for digging up Muslim women from their graves and raping them.

Hindutva propounder Savarkar, in his book Six Glorious Epochs of Indian History, has even justified rape as a legitimate political tool.