"Are We Waiting For Muslims In Assam To Be Put In Camps?": Congresswoman Ilhan Omar Slams US Silence On Assam & Kashmir
Advertisement https://pagead2.googlesyndication.com/pagead/js/adsbygoogle.js 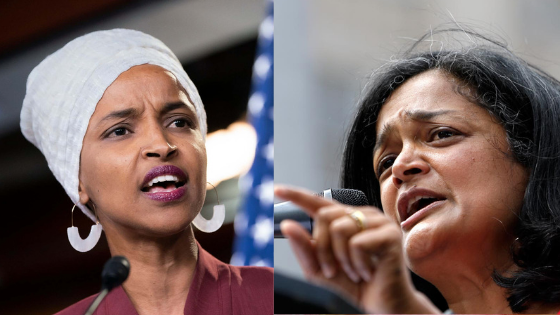 US Congresswomen Ilhan Omar and Pramila Jayapal came down heavily on the US government, questioning the country’s support for the Modi-led BJP regime during a Congressional hearing on ‘Human Rights in South Asia: Views from the State Department and the Region’ on Tuesday.

Omar took particular aim at the Modi government’s recent moves to strip lakhs of people in Assam of citizenship and the building of detention camps, which is mainly aimed at Muslims.

“At what point do we no longer share values with India?” Omar asked the US assistant secretary of state for South Asia Alice Wells. “Are we waiting for the Muslims in Assam to be put in those camps?”

Kashmiris have been restricted from communicating outside their country for 50+ days.

In Assam, almost 2 million people are being asked to prove their citizenship. This is how the Rohingya genocide started.

At what point do we question whether PM Modi shares our values? pic.twitter.com/xazzwfiR61

Wells, in reply, said that the U.S. was satisfied that the decisions by the Modi government were legitimate due to the fact that they were legal under Indian law.

“As a democracy, we respect other democracies’ abilities to self-police and self-regulate,” said Wells.

Indian-American Congresswoman Pramila Jayapal expressed concern over the situation in Jammu and Kashmir after the abrogation of the special status of the state and said that as the world’s largest democracy India needs to uphold its commitment to human rights.

“I recognize the situation is complex,” said Jayapal, adding that, however, “India as the world’s largest democracy and a critical ally for the U.S. needs to uphold its commitment to human rights,” she said.

The state of Jammu & Kashmir has been in a state of lockdown since 5 August, when the Indian government effectively abrogated Article 370 of the Constitution, which granted the state a special status, and downgraded it into two union territories.

During the course of the hearing, Ilhan Omar slammed a journalist from Times of India for making ‘dubious’ claims in favour of the Indian government on the current situation in Jammu and Kashmir.

Responding to Singh’s opening remarks at the US congressional sub-committee hearing, Omar reminded the former that the job of a reporter was to find the ‘objective truth about what’s happening and report it to the public.’

“Ms Singh, a reporter’s job is to find the objective truth about what is happening and report it to the public. You have an enormous audience at The Times of India and you have an enormous responsibility to get it right. I am aware of how the narrative shaped by reporting can distort the truth. I am also very aware of how it could be limited to sharing only the official side of the story. The press is at its worst when it is a mouthpiece for a government.”

Questioning Singh’s ‘version of the story’ on the current situation in Kashmir, Omar said, “In your version of the story, the only problems in Kashmir are caused by what you call militants, the only people protesting to break away from India; and are all nefariously backed by Pakistan. You also make the incredibly dubious claim that the Indian government’s crackdown in Kashmir is good for human rights. If it was good for human rights, Ms Singh, it wouldn’t be happening in secret. You make, what I might call, a feminist case for the occupation of Kashmir and communication shutdowns, saying it will be better for women.”

While the hearing was taking place in Washington, Modi, on the other hand, was hobnobbing with infamous war criminals like Henry Kissinger, Tony Blair, John Howard, Condoleezza Rice and Robert Gates at the JP Morgan International Council meeting in New Delhi.

The group later posed for a picture, to which Canadian journalist Usaid Siddiqui commented on Twitter saying, “A reminder that it was under George Bush, the man who invaded Iraq leaving behind a million corpses, that Narendra Modi was banned from the U.S. for Gujarat.”

A reminder that it was under George Bush, the man who invaded Iraq leaving behind a million coarpses, that Narendra Modi was banned from the US for Gujrat.https://t.co/OyWCYiOlfg