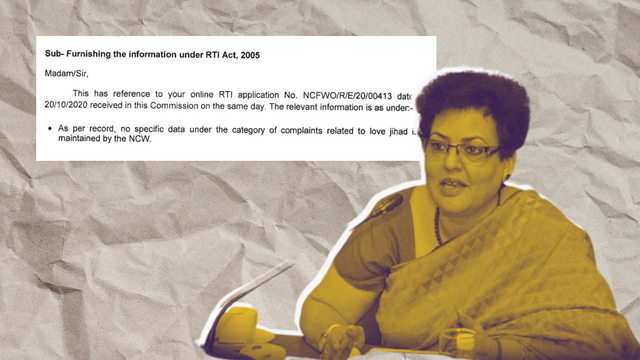 Days after the National Commission for Women (NCW) Chairperson spoke of rising cases of “Love Jihad”, NCW now says it has “no data” of love jihad cases in response to an RTI filed by a Bengaluru-based activist, throwing its own earlier claim in this regard into question.

“As per record, no specific data under the category of complaints related to love jihad is maintained by the NCW,” the statement reads.

Speaking to The Cognate, Shazin Siddiqui, the activist from Human Collective who filed the RTI said, “The ongoing propaganda about the ‘Love Jihad’ narrative has been created by officials to hide their own shortcomings and deceive the common public.”

“I filed this RTI to check the validity of the statement made by the NCW Chairperson and the hype it got in the media,” Shazin added.

On October 20, the chairperson for the NCW, Rekha Sharma, met with the Maharashtra Governor Bhagat Singh Koshyari. Among the issues the two discussed, according to a tweet posted by the official handle of the NCW were “rise in love jihad cases.”

Saket Gokhale, a social activist, had filed a petition in the Bombay high court, requesting Sharma’s removal as chief of NCW, arguing that the “NCW is meant to be an independent body for protection of women’s rights, and its chairperson engaging in such blatantly communal and divisive discourse casts aspersions on the body’s ability to act in a non-partisan and secular manner.” The invocation of “rising cases of love jihad by the Chairperson, when no such cases even exist, points to a communal dog whistle policy which is intended to target the Muslim community, vilify inter-faith couples, and create discord in society”, the petition said.

“There has been a violation of Articles 14 (equality before law), 21 (protection of life and personal liberty) and 25 (all persons are equally entitled to freedom of conscience and the right to freely profess, practice, and propagate religion subject to public order, morality and health) of the Indian Constitution by Ms Sharma,” Gokhale said.