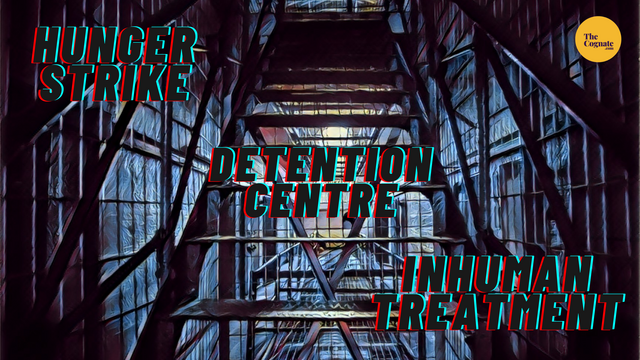 Seventy-six foreigners lodged at a detention centre in the capital have gone on an indefinite hunger strike from Tuesday morning in protest against inhuman conditions in which they are forced to live, says a press release issued by People’s Union for Civil Liberties (PUCL). The detainees are nationals of Pakistan, Afghanistan, Myanmar, Spain and several African countries.

A team of PUCL comprising N D Pancholi, Sheoraj Singh, and Arun Maji visited the detention centre located in Beggars’ Home, Lampur, and Narela in North Delhi. They issued a statement that inmates informed the PUCL team that the food served to them is not worth eating -boiled vegetables saturated with tasteless water is the daily routine and breads remain half cooked. “There is no provision for drinking water and inmates are forced to buy the same from outside. There is no cleanliness in spite of the much propagated ‘Swachhata Abhiyan’ (Cleanliness Drive) of the government. The lavatories and bathrooms continue to remain dirty and repulsive to use.”

Some inmates who require daily medicines are also not allowed to procure them. The team also alleged that there is corruption in the supply of daily necessities like toothbrush, toothpaste, soaps, winter shoes etc. Against allotted provisions.

The inmates have informed the PUCL that despite repeated representation there has been no redressal of complaints. Instructions issued by the Delhi High Court relating to the upkeep of the Centre and related provisions for the detainees are being blatantly flouted, says the statement. The inmates have alleged that behaviour of the Superintendent at the Centre is inhuman.

PUCL calls upon the Central and state governments to inquire into the grievances of the agitating detainees and take immediate steps for their redressal.

The Bombay High Court has sought all inquiry documents related to the custodial suicide of, Asghar Ali Mansoori. The court made the decision after...