Zomato Shuts Down Bigot Who Refused Delivery From Muslim Executive. Now Hidutvadis Are Up In Arms Against Them
Advertisement https://pagead2.googlesyndication.com/pagead/js/adsbygoogle.js 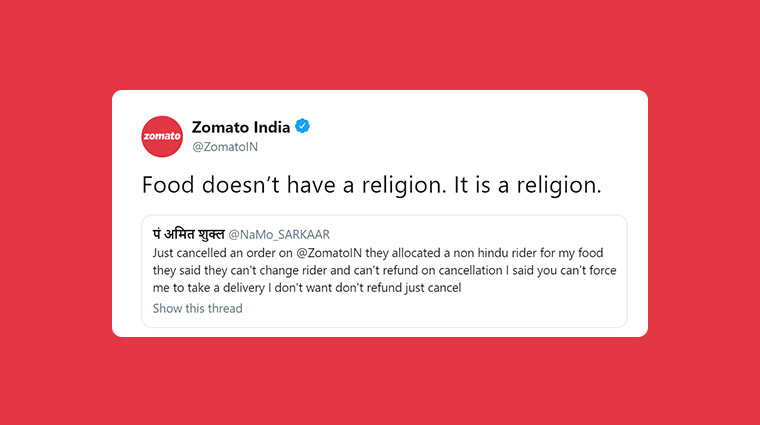 Internet Hidutvadis are up in arms against food delivery app Zomato, because the company refused to change the Muslim delivery executive after a customer demanded that he be replaced with a Hindu executive.

On Tuesday night, a Twitter user Amit Shukla after ordering food through Zomato cancelled his order as the company had allocated a Muslim rider for his delivery. Zomato, however, refused to entertain the customer’s bigoted request and replied saying that the “Food doesn’t have a religion. It is a religion.”

While many applauded the company’s stance for declining to entertain a bigot, many others, however, threatened to uninstall the food delivery app from their phones and in a well-organised way started trending their hate on Twitter.

I was thinking only Politicians are appeasing a particular community but turns out this Special Preferential Treatment aka Appeasement is deep rooted in the society and needs to be called out.

When a MUSLIM orders from Zomato:

According to Zomato: Religion Matters

When a HINDU orders from Zomato:

However, despite the hate-mongering, Zomato founder Deepinder Goyal echoed his company’s stand and said that he would not compromise with his values even if it meant losing business. “We are proud of the idea of India – and the diversity of our esteemed customers and partners. We aren’t sorry to lose any business that comes in the way of our values,” he tweeted.

We are proud of the idea of India – and the diversity of our esteemed customers and partners. We aren’t sorry to lose any business that comes in the way of our values. 🇮🇳 https://t.co/cgSIW2ow9B

At a time, when people are being lynched in the country merely for their choice of food, Zomato’s stance is truly praiseworthy.