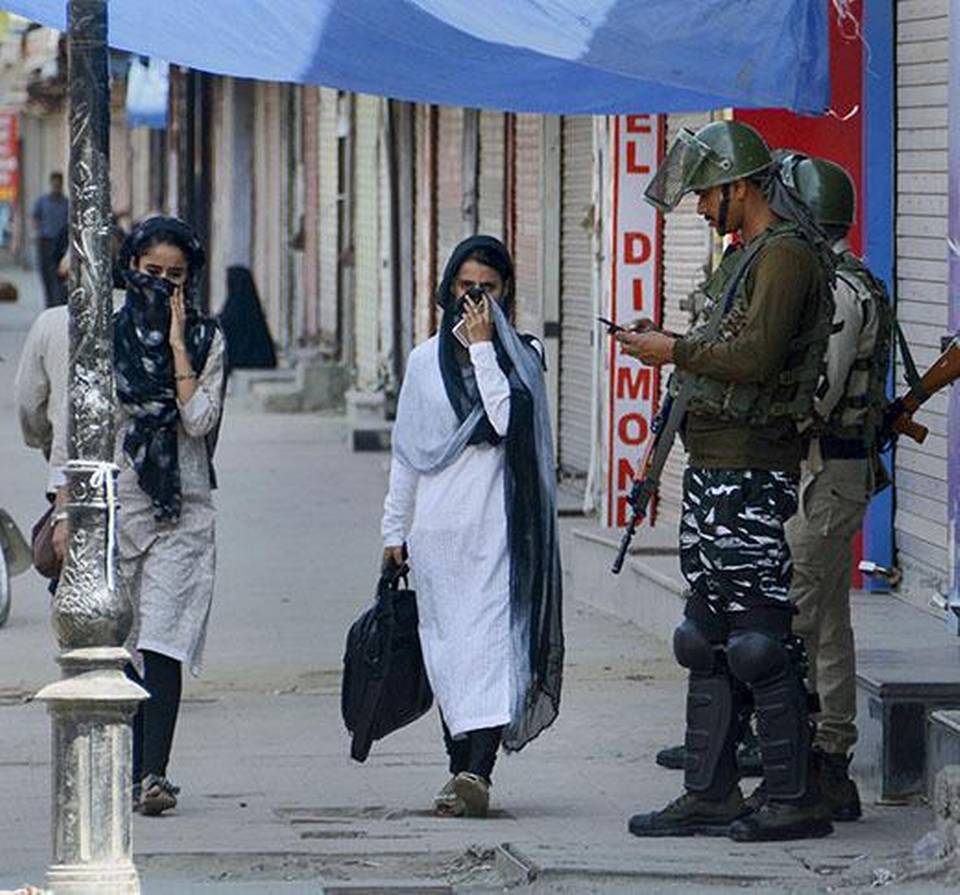 A fact-finding report released by a team of women activists has made disturbing allegations against the Indian Army deployed in Jammu and Kashmir, exposing government claims of a return to normalcy in the state. The allegations include taking away boys as young as 14 or 15 and torturing them and harassing young women, including the removal of their niqabs.

“The Army pounces on young boys. When fathers go to rescue their children, they are made to deposit money, anywhere between Rs 20,000 to Rs 60,000,” a woman resident told the fact-finding team, which consisted of Communist Party of India leader Annie Raja, Kawaljit Kaur and Pankhuri Zaheer of the National Federation of Indian Women, the advocate Poonam Kaushik from the Pragatisheel Mahila Sangathan, and Syeda Hameed of the Muslim Women’s Forum. The team visited Kashmir from September 17 to 21.

The Fact-finding team at the Delhi Press Club.

“In Bandipora, we saw a young girl who made the mistake of keeping a lamp lit to read for her exam on the chance that her school may open soon,” said the fact-finding report released on Tuesday. “Army men, angered by this breach of ‘curfew’, jumped the wall to barge in. Father and son, the only males in the house were taken away for questioning. The two have been detained since then.”

At the press conference, Raja said the abrogation of Article 370 “united the people of Kashmir”. “They now speak in one voice and their sentiment is one. Everyone, irrespective of age or gender, feels that this is the last blow on the dignity and self-respect of the people,” she added. “They cannot forgive and they cannot forget. This is the feeling in all districts. They were so angry but determined to fight back.”

Raja continued: “What I felt is happening in Kashmir is the Indian variant of genocide. There is a human tragedy and that tragedy is because of so many reasons: communication ban and absence of transportation, deaths taking place because of non-availability of timely medical care.”

According to the report, about 13,000 young boys have been “lifted” by the Army during the lockdown. Raja explained, “We met some of the mothers who said their children were picked up by the Army at night and that they were not provided any information about the whereabouts of their children.”

Raja said the Army cannot remain in Kashmir as a “holding power”. “The extent of their atrocity and violence…and them terrorising people, especially young boys and girls, at night…is a dangerous thing,” she said. “It makes all of us think about what is the policy of the government in Kashmir.” She claimed that currently, no political party except the Bharatiya Janata Party can organise meetings in Kashmir. “This itself is a violation of democracy and democratic rights of the people,” she argued.

“The people in Kashmir usually store rice for 3-4 months. The army comes and pours kerosene on it,” Raja explained how the State tortures its citizens.

Kaushik said the Kashmir Bar Association’s office was locked when the team visited it. “Lawyers I spoke with said the state is judicially paralysed…that constitutional laws don’t exist here,” she recalled. “The bridge between Kashmir and India, which was built on the basis of Article 370, has been broken.”

Syeda Hameed, herself a Kashmiri, said that Kashmir ranks high up in many development indices when compared to other parts of the country. The team was also told by the women who met at Gurudwaras that they have always felt secure in Kashmir. Young women complained that they were now being harassed by the army, including removal of their niqab.

“People are living in uncertainty and they don’t know what their future would be. The life is at a standstill,” said Kawaljit Kaur.

The report concludes: “Everywhere we went there were two inexorable sentiments. First, desire for Azadi; they want nothing of either India or Pakistan. The humiliation and torture they have suffered for 70 years has reached a point of no return. Abrogation of 370 some say has snapped the last tie they had with India. Even those people who always stood with the Indian state have been rejected by the government. Since all their leaders have been placed under PSA [Public Safety Act] or under house arrest, the common people have become their own leaders. Their suffering is untold, so is their patience. The second was the mothers’ anguished cries…their children’s lives should not be snuffed out by gun and jackboots.”

To redress the situation, the team demands that: