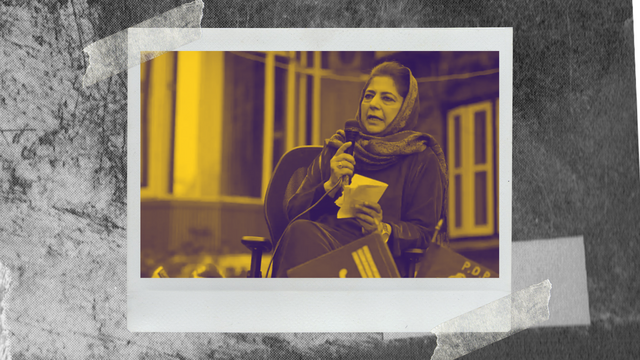 In a sign of defiance against the revocation of Article 370 by the Centre last year, People’s Democratic Party chief and former CM Mehbooba Mufti on Friday said her party would not be raising the Tricolour till Jammu and Kashmir’s flag and Constitution are restored.

She announced that she would not be contesting any election without J&K state’s flag and constitution and that her party was not “comfortable and compatible with today’s India”.

Addressing a press conference after her release from 14-month detention, Mehbooba said, “If some people think that parties and people in Kashmir will forget the Kashmir issue and Article 370 after some time, they are living in a dream world.” Thousands of people, she said, have sacrificed for the Kashmir issue.

“Now it is the turn of the leaders to give blood and I will be the first to do it”. She said her struggle won’t stop at the restoration of J&K’s special but will go beyond — for the resolution of the Kashmir issue. “Ours is a political fight and we will fight peacefully.” “All options, including peaceful street agitations, are on table,” she said.

“They left no stone unturned to instigate people by changing laws, whether it was the domicile policy, the official languages, or ignoring Muslim officers in the Secretariat or taking away J&K resources,” she added.

Mehbooba along with other mainstream leaders was arrested after Article 370 scrapping on August 5, 2019, and was among a dozen mainstream leaders booked under the PSA before her release early this month. “This country can be run on the basis of the Constitution of India and not on the BJP manifesto,” Mehbooba said, adding that J&K’s flag had been taken away by “dacoits.”

She further said that the central government had desecrated the Constitution of India to push the Bharatiya Janata Party (BJP) manifesto promise of doing away with Article 370.

“They say you can buy land in J&K we’ve abrogated Article 370. Then they said they will give free vaccines. Today, PM Modi had to speak of Article 370 for votes. This government has failed to solve the issues of this nation,” she said.

In a controversial decision in August last year, the Indian government the revoked the special status of Jammu and Kashmir and limited its autonomy with the nullification of Article 370, hence dividing its only Muslim-majority state to create two federally-administered territories: Jammu and Kashmir, and Ladakh. The move was followed by an extensive lockdown in the region, military deployment and arrests of all major political and rebel leaders.