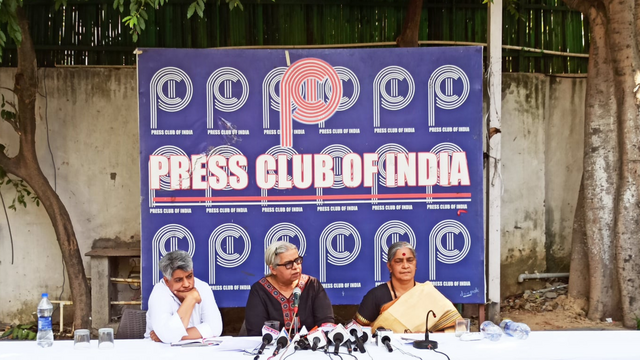 A delegation of woman representatives from different organisations has demanded that UP CM Ajay Mohan Bisht Alias Yogi Adityanath be sacked from his post due to the “deteriorating” condition of constitutional bodies and growing violence against women, especially Dalit women in the state. They also condemned the ruling BJP and the UP government for calling organised protests against the brutal attack on the Dalit girl as an “international conspiracy”, adding that every act of dissent is now being termed as a conspiracy.

They released a fact-finding report at a press conference held at the Press Club of India, after detailed interaction with the eight family members of the deceased Dalit girl who was allegedly raped and strangulated on September 14 and later died in Safdarjung Hospital on September 29.

They visited the Jawaharlal Nehru Medical College & Hospital in Aligarh and also visited some people in the city who knew about the case. “We spoke to several doctors and other staff who came in contact with the deceased during her treatment there. Due to the atmosphere of fear and pressure from various quarters we are not naming the doctors, medical officers or other personnel with whom we interacted”.

She said that disclosing the identity of a rape victim is a crime punishable by a jail term of up to two years but BJP IT cell head tweeted a video of the girl.

“In the video, when the victim asked why they strangulated you, she says because she was resisting ‘zabardasti’.

‘Zabardasti’ is used for sexual assault and this video is of the police station in Hathras. Such efforts of the government and by BJP in trying to shield the perpetrators are highly condemnable,” she added.

The delegation revealed that “the family alleged that there was intimidation and delay at every step, and no support came from the police or administration. From the moment they took her to the Hathras police station to her forced cremation, they faced intimidation, threats, manhandling and allurement of money once the case became public.”

The report demanded an enquiry into the diversionary narrative propaganda in the case, suspension of the District Magistrate, an enquiry into the role of all authorities including public representatives in denying justice, an investigation by NHRC into why all dissent is being criminalised and strict implementation of SC/ST Prevention of Atrocities Act.

According to the Fact-Finding Report, the Bul Garhi village is a Thakur caste dominant village with only 4-5 houses of Dalit families. “The Thakur landlord community has wanted the Dalit families to leave the village for quite some time and make it a ‘Thakur Only’ village. The land, which must have been given to the Dalit families as part of one of the government schemes must have irked them, though we couldn’t ascertain when the land was allotted to the family of the deceased girl.”

The girls and women of Dalit families face harassment on a regular basis when they go out. One of the accused had in fact tried several times in the past six months to harass the deceased girl and as a result, she had stopped going out alone, the report added.