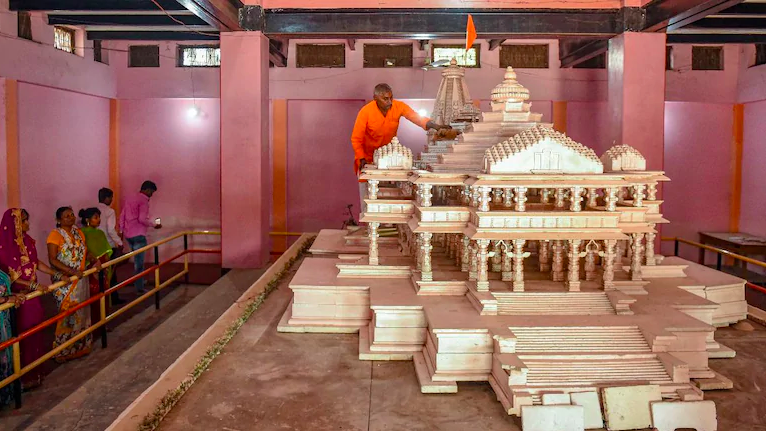 Despite the constitutional prohibition that bars a state from levying any tax or collecting funds in the name of any religion, the Uttar Pradesh state’s Public Works Department (PWD) has blatantly gone about opening a bank account to collect funds for the construction of the Ram temple in Ayodhya, where Babri Masjid once stood.

On January 19, 2021, the PWD’s engineer-in-chief, Raj Pal Singh, wrote a letter to the MG Road branch of HDFC bank in Lucknow on official letterhead directing them to open an account in the name of  “PWD Ram Mandir Welfare”. And no sooner than this letter reached the branch, a new banking account with the number 50100365009830 was opened, The Wire reported.

The letter to the bank explicitly states that the new account is meant for depositing the proceeds of one-day’s salary from all PWD employees as their contribution towards construction of the “Shri Ram temple”. The letter adds that this contribution would be ‘voluntary’.

Article 27 of the Indian constitution states, “No person shall be compelled to pay any taxes, the proceeds of which are specifically appropriated in payment of expenses for the promotion or maintenance of any particular religion or religious denomination.”

While the ‘voluntary’ donation by PWD employees may not legally be considered a ‘tax’, there can be no doubt that the use of official machinery to collect this money amounts to a coercive levy for the promotion of a particular religion.

On January 15, the Shri Ram Janmabhoomi Teerth Kshetra Trust, the body set up to oversee the building of the temple, launched a countrywide contribution drive for the construction. The campaign to collect funds will be carried out across 5,25,000 villages. The sum collected will have to be deposited within 48 hours in banks. The drive will end on February 27.

The Ram temple’s construction began in August, over two weeks after Prime Minister Narendra Modi laid its foundation stone at an elaborate ceremony in Ayodhya on August 5.

A landmark Supreme Court verdict in November 2019 had paved the way for the construction of the Ram temple. The court had ruled that the land, where Babri Masjid stood and was destroyed by marauding Hindu extremists, would be handed over to a government-run trust for the construction of a Ram temple. The court had also said that the demolition of Babri Masjid was illegal and directed the government to acquire an alternative plot of land to build a mosque.