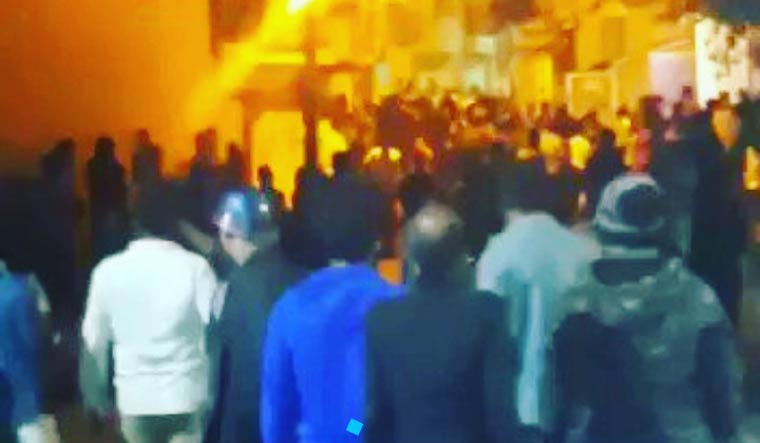 Violence broke out in Bangalore’s Kaval Byrasandra and DJ Halli on Tuesday night and one person has been killed in police firing after a derogatory post against the Prophet Muhammad was posted on Facebook by Congress MLA Akhanda Srinivasa Murthy’s nephew.

The incident occurred around 8 pm when a group of people visited KG Halli police station to file a complaint against P Naveen, the nephew of Pulakeshinagar MLA over his derogatory post against the Prophet. However, when the police refused to file an FIR and asked them to talk and sort the matter among themselves, another group of people gathered outside the station went on a rampage, torching vehicles and chanting slogans demanding immediate arrest of the perpetrator.

The mob later gathered outside the residence of the MLA and pelted stones at his residence. In the ensuing police firing, one person is reported to have killed.

Meanwhile, MLA Akhanda Srinivasa Murthy said that action will be taken against the person who made the remarks against the Prophet. “A Facebook post by my sister’s son has gone viral. I have nothing to do with the post. The post is said to be against a particular community and I have asked the police to arrest the person who has put up the offensive post,” said Murthy.

Community leaders also sprung into action and have appealed for calm. Ameer-e-Shariat of Karnataka Hazrat Maulana Sagheer Ahmed Khan said that legal action should be taken against the accused for his comments, but cautioned against taking the law into the hands and indulging in vandalism.

Moulana PM Muzzammil Rashadi also appealed for calm and said that an FIR has been lodged against the accused, and asked youths to stay away from hitting the streets in protest.

Masood Abdul Khader from the Karnataka Muslim Muttahida Mahaz (KMMM) said that violent reaction will only be counterintuitive.

Thousands of Muslims gathered at Delhi’s Jama Masjid after Friday’s prayers to protest against the former chairman of Shia Waqf Board, Waseem Rizvi, who...

Waseem Rizvi’s Lies And The Infallibility Of The Quran

Former Shia Waqf Board chairperson Waseem Rizvi’s outrageous claims against the Quran has enraged Muslims leading to protests across the country demanding his arrest....