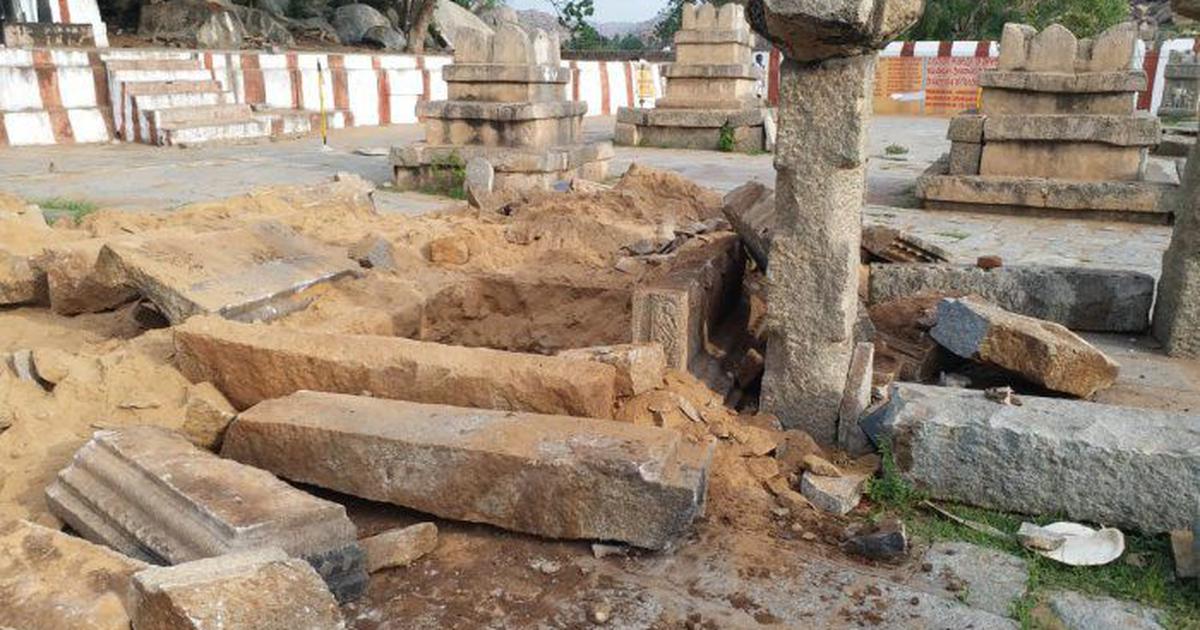 Days after the tomb of a 16th-century Hindu saint at Anegundi near Hampi in Karnataka was found razed to the ground, the state police have arrested six persons, including a temple priest, for the wanton vandalism of the heritage site.

The arrested were identified as T. Bala Narasaiah, 42, Pollari Murali Manohar Reddy, 33, D. Manohar, 27, K. Kummat Keshava, 29, B. Vijaya Kumar, 36, and Sriramulu, 45. Another accused, Srinivas Reddy, 40, is absconding. The police have also seized pickaxes, shovels, spades and other tools used for digging the Brindavana, besides a four-wheeler, The Hindu reported.

The police stated that all six accused hailed from Tadapatri town of Anantapur district in Andhra Pradesh and had dug up the Nava Brindavana looking for treasure.

Bala Narasaiah, who was one of the six arrested, is a priest at a temple in Andhra Pradesh. He allegedly brought the others to gig up the site, based on a story that the saint was buried with diamonds and pearls gifted by King Krishnadevaraya.

Koppal district police, under the guidance of IGP MN Nanjundaswamy arrested all the miscreants who had vandalised the Brindavana of 15th century great Madhva guru Sri Vyasaraja at Anegundi near Hampi. Reports say all arrested are educated. Quick action by police. #Karnataka

Mastermind is a priest at an AP government run Rama temple. The planner Manohar Reddy is an MBA graduate. A Vedic scholar Sharma allegedly told them about the hidden treasure.

The destruction of the tomb of the 16th-century saint of the Madhwa tradition had sent shock waves across Hampi. It also gave the opportunity for the right-wingers on social media to spread false rumours blaming Muslims for the vandalism.

Got very disturbing news from Hampi, #Karnataka. The Navavrundavanas of Anegundi, the location for the Jeeva Samadhis of Hindu Madhva saints, including Shri Vyas Raj Teertha have been descreted and vandalised. This is clearly an attempt to provoke and humiliate Hindus. pic.twitter.com/y7409W3rUN

I think all these acts of attacks on #Hindu temples, arts, people are all part of a narrative to create an atmosphere of communal unrest that can lead to #Godhra2.0. Then they can defame @narendramodi like they did post-2002. That’s the only hope of survival of the #ecosystem

A desecration that did not happen even during Bahmani rule in the region has happened in ‘secular’ India. I hope this prompts rethink among those Hindus who think that just cos Hindus survived Islamic and British rule the religion is safe, and nothing can happen to Hindus now

Second Moghul Era has started in this country so these things are bound to happen. We have already seen the jhalak of Sharia Court in Jharkhand. Jiziya tax extracted from us to give scholarships. Our girls kidnapped raped converted.What are we waiting for?Get ready to wear tents.

This incident comes five months after a group of youths was arrested after a video of them vandalising pillars at the Vishnu Temple Complex in Hampi went viral on social media. Even then, right-wingers on social media had spread misinformation that Muslims were behind the attacks.