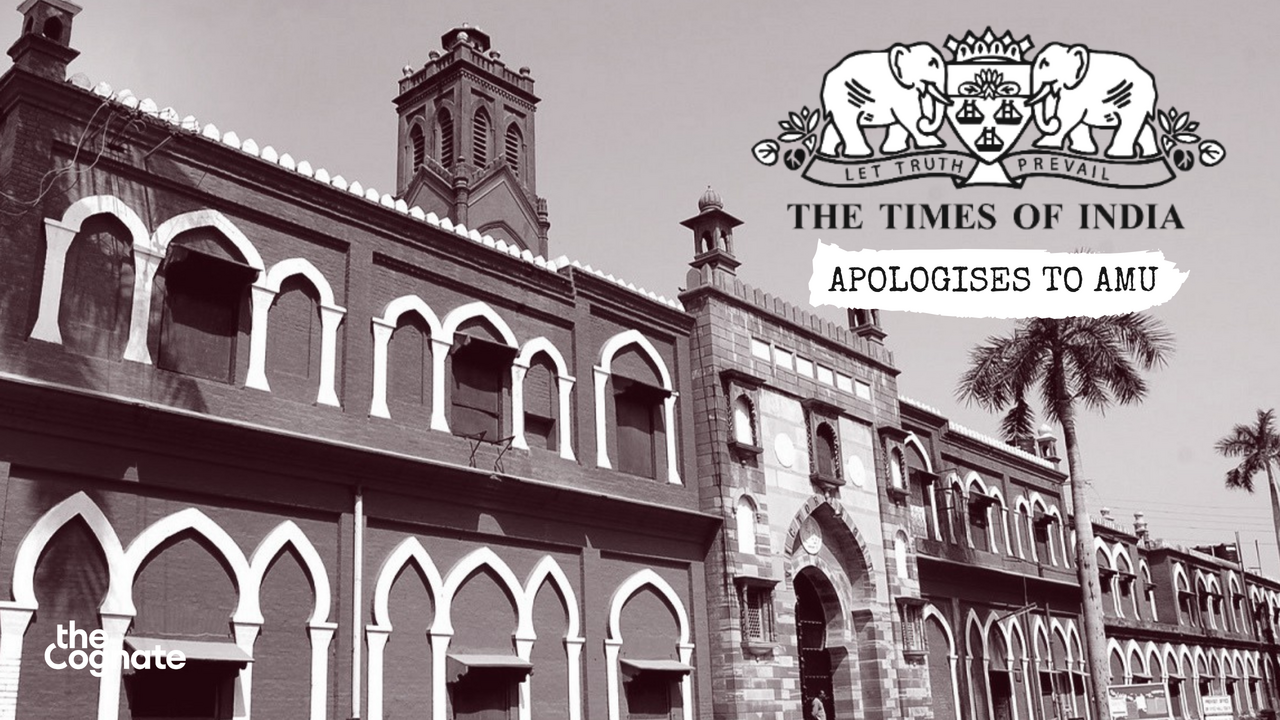 Fourteen years after publishing an allegedly defamatory article on Aligarh Muslim University, Times of India has tendered an apology in a civil court in Delhi, after a case was filed against the paper by a former law student of the university, Farrukh Khan, who is now a practising advocate.

An article titled, “AMU: Where the degrees are sold like toffees” written by Akhilesh Kumar appeared in the newspaper on 29 September 2007. Farrukh Khan graduated in law from AMU in the same year and filed a case against the publisher, the editor and the reporter of the newspaper.

The story, which is still available on TOI’s website says, “The traditional topi-sherwani is passe, so are words like aadaab and huzoor. Hostels have become shelters for goons and education is secondary to politicking and gangsterism. Welcome to AMU, one of India’s oldest universities which has been in the news for all the wrong reasons.”

The news story also quoted an anonymous source saying that degrees are distributed “like toffees” in the university.

“Thesis and synopsis can be purchased from Shamshad Market, adjacent to AMU campus, and are awarded to passouts. None bothers to crosscheck their authenticity. Degrees are distributed like toffees,” claimed the story.

“I was conferred with my degree in the same year and being a part of that institution I felt bad. It had demeaned the hard work I did to get that degree and also the status of the university,” Khan told The Cognate.

“Having the degree in my hand I was searching for a job and I thought with this image being created by media, will anyone recruit someone from AMU, be it me or someone else. This triggered me to confront the newspaper and hence I decided to file a defamation suit,” he said.

Farrukh Khan is now administrative head of a law firm known as Dewaan Advocates. The Court had also imposed a fine of Rs 2000 a few years ago on Times of India for delaying the proceedings.

On asking why it took 14 long years for the paper to tender an apology he said, “Being a lawyer I am aware and content about this because in some cases legal procedures take time and in this case, the justice is surely delayed but not denied”.

The article is still on the public domain. Adv. Farrukh said, “I will be sending a fresh notice to them for removal of that article”.

He further said, “We have conquered this, they have identified their mistake, but in such cases, we need to be patient to get results, moral of the whole process is you must keep fighting for it”.

The matter was argued on the premise that it was a completely malicious campaign to demean, refute and disregard the degrees conferred by one of the prestigious educational institutions of the country and was infused only to serve the malafide intention of the newspaper.

Prof. Shafey Kidwai, Member-in-charge to Public Relations Office told, “we got to know about this and this is a matter of concern that many news outlets come up with frivolous and sensational news about Aligarh Muslim University, a very reputed central university”.

However in 2007 soon after this article, Atul Mishra of Times of India wrote a rejoinder to neutral the hurt sentiments of the University.

“We are looking forward to seeing that written apology is tendered by the newspaper”, he said.

The tendered apology by the newspaper is yet to be seen in the public domain.