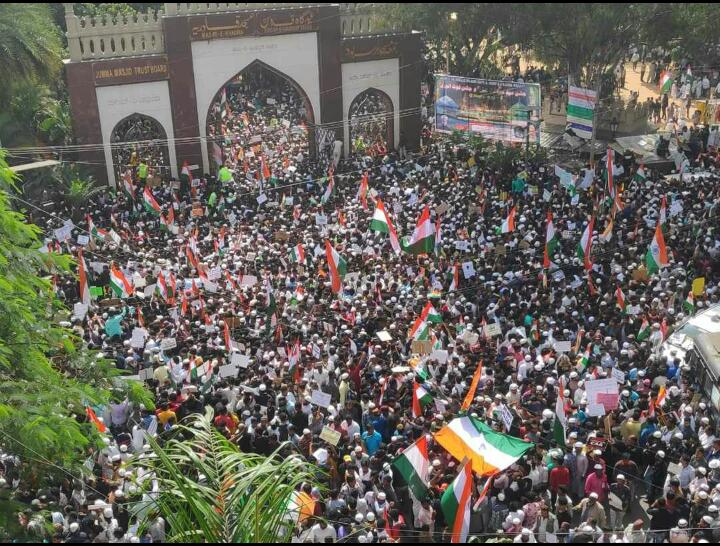 Over 1 Lakh people gathered at Bengaluru’s Quddus Saheb Eidgah grounds on Monday morning to protest against the sectarian and anti-Constitutional Citizenship Amendment Act and the Draconian National Register of Citizens (NRC). At the massive gathering, protesters called for a civil disobedience movement against CAA and NRC, sending out a strong message to the BJP-led Central and State government.

The 5-hour long programme, organised by the Joint Action Committee, formed by various Muslim organisations, saw over 100,000 protesters take part in the protest, which was peaceful with the crowd waving the national flag and chanting slogans against Narendra Modi and Amit Shah and demanding the repealing of the Nazi-like legislation.

The protest was announced to begin at 10 AM, however, the crowd started trickling into the ground much before that. Business owners in and around RT Nagar, Benson Town, Frazer Town, Cantonment and Shivajinagar areas of the city shut their shops in the morning to attend the demonstration, making the ground packed with a crowd so big that security personnel had to lock the gates and install barricades. 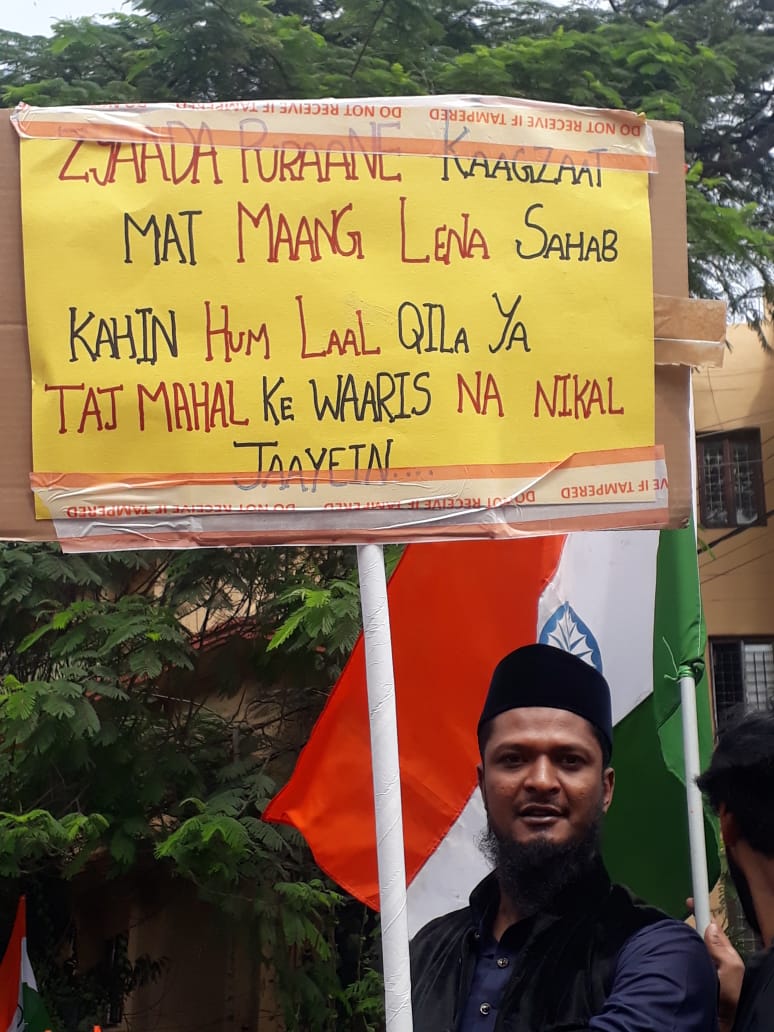 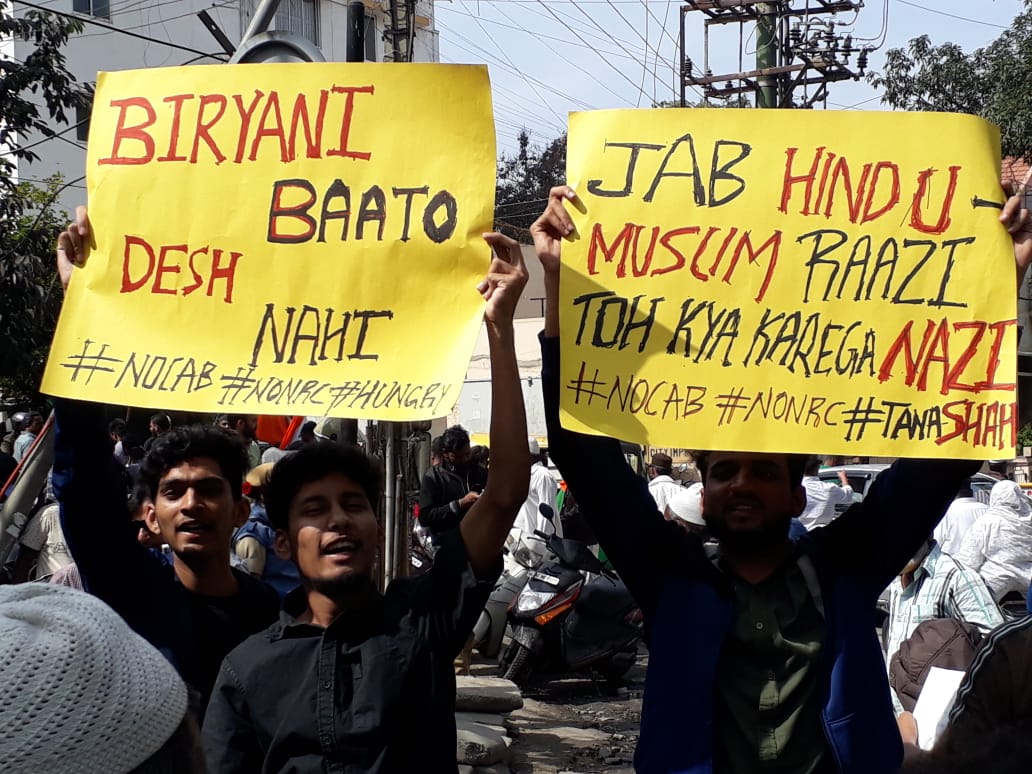 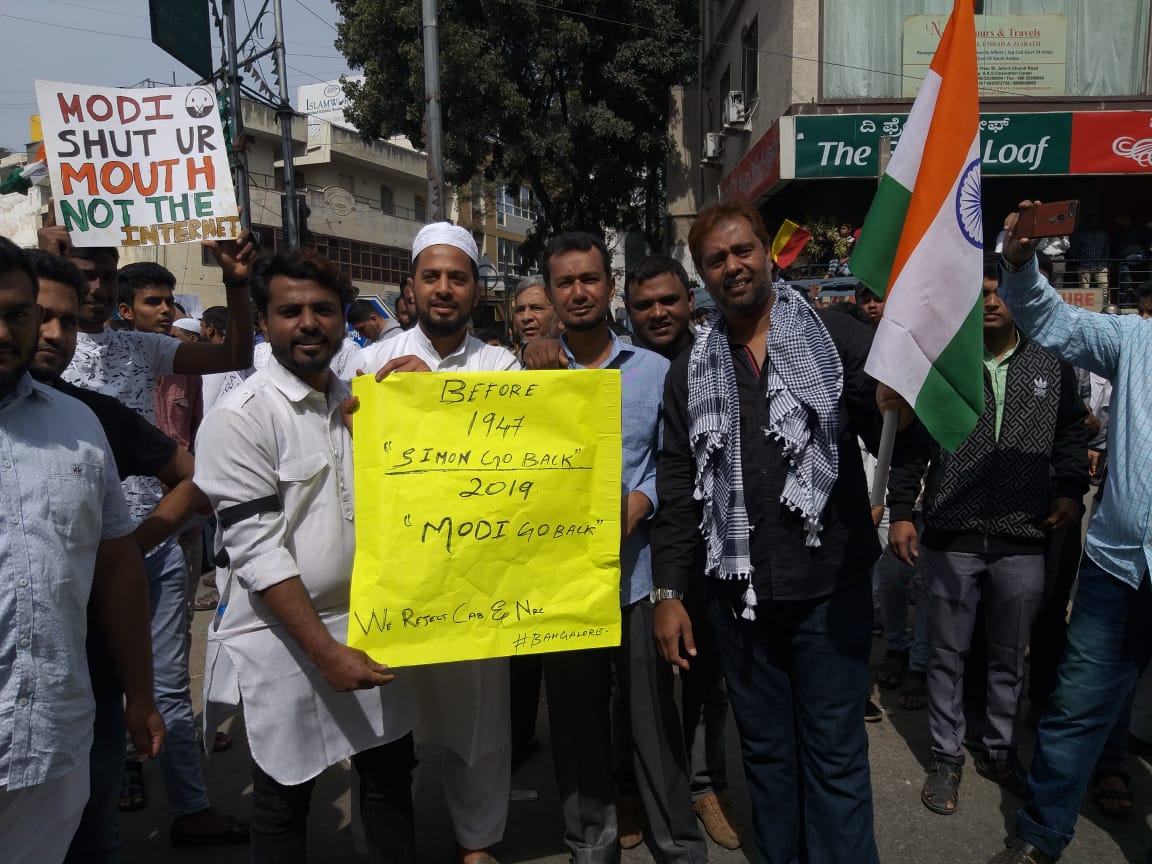 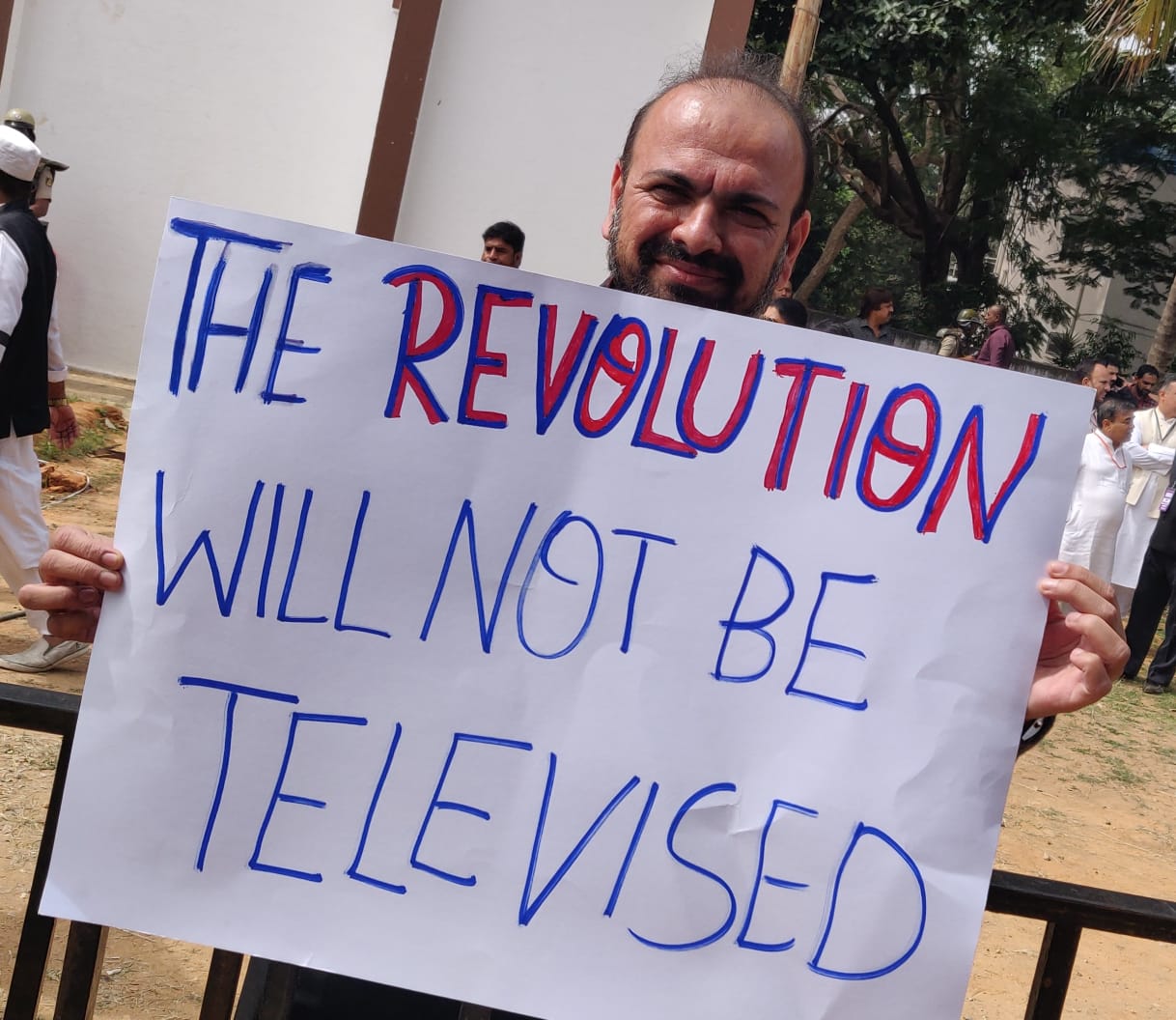 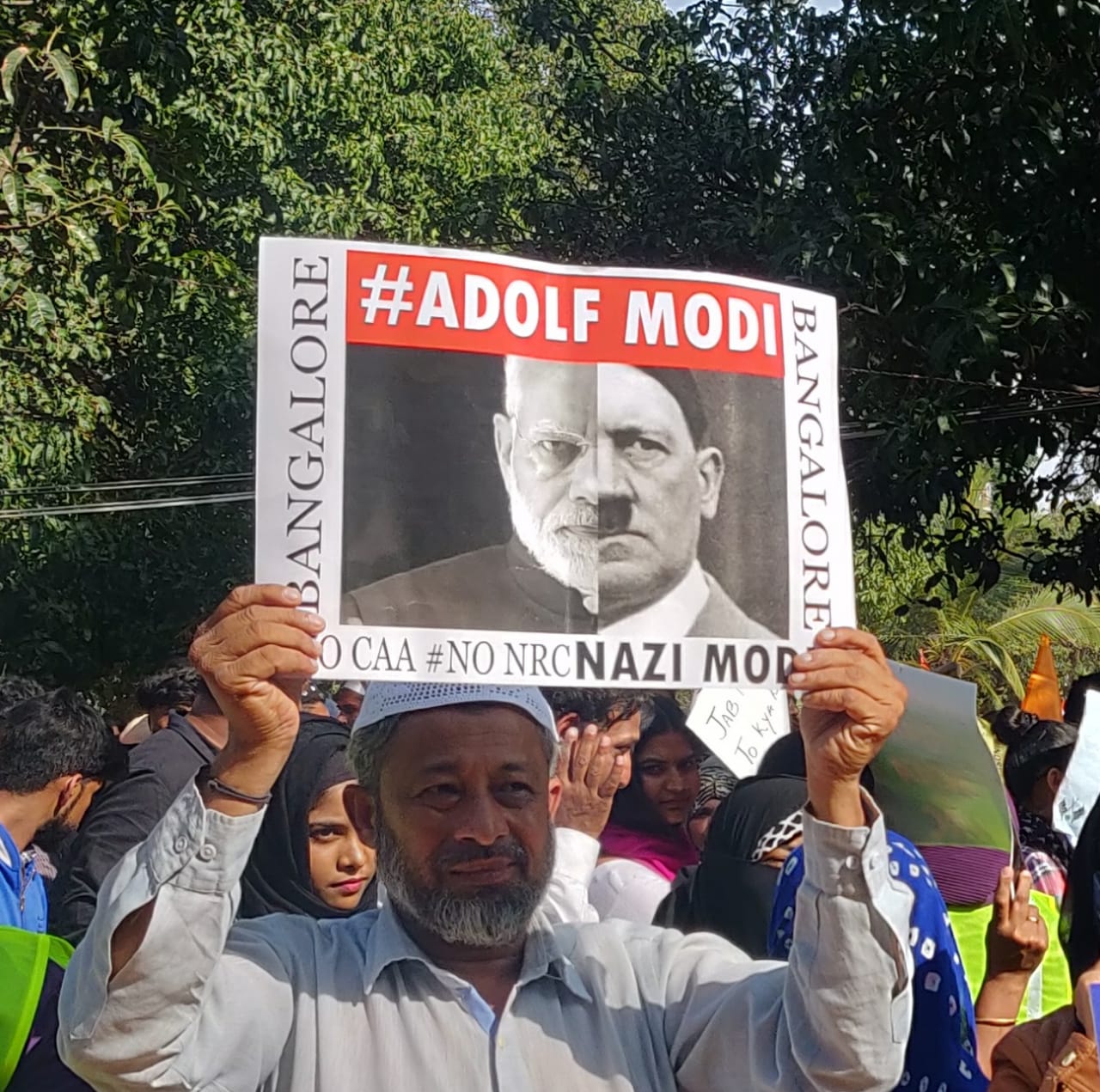 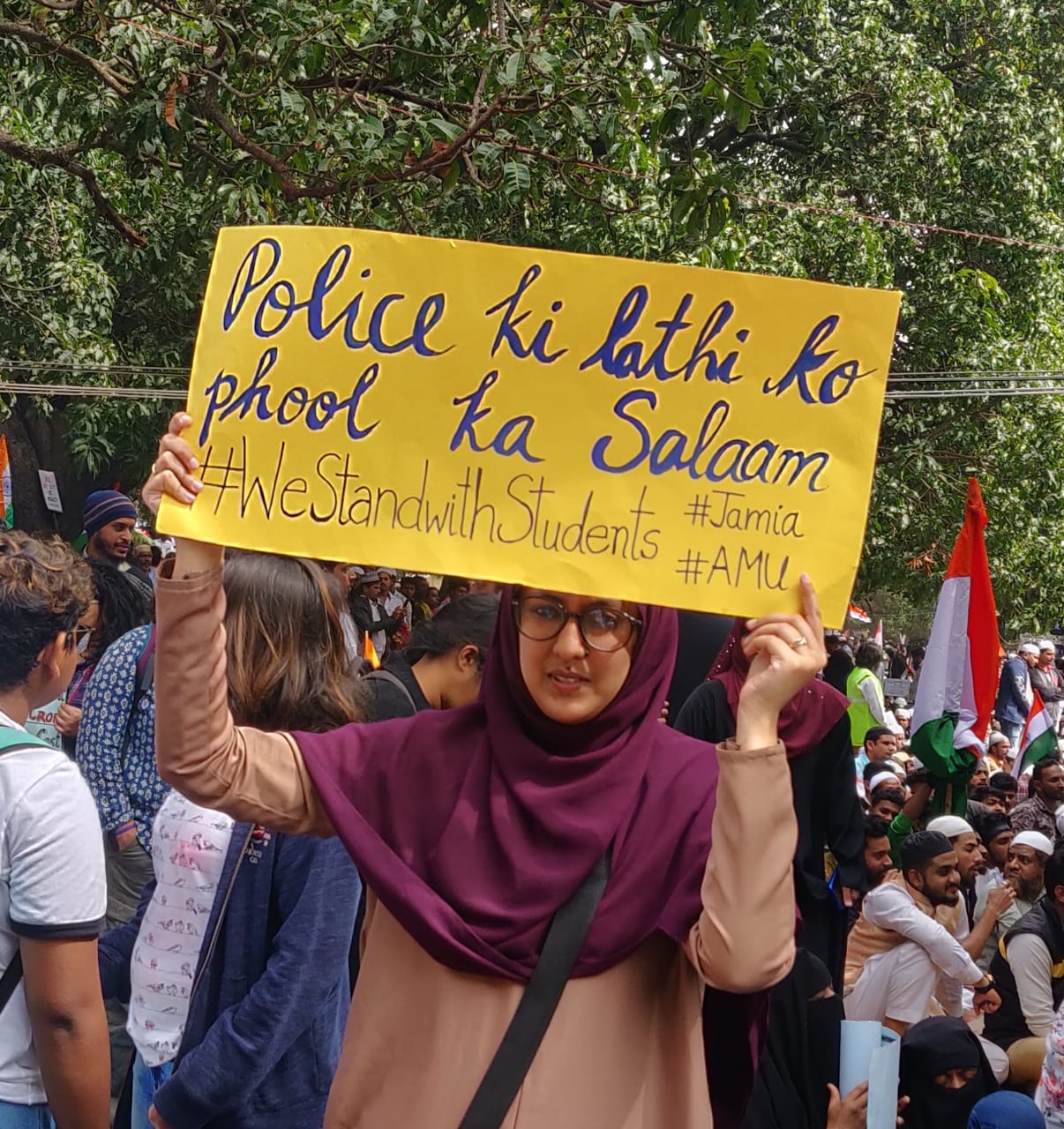 Speaking to the protesters, former IAS officer and activist Harsh Mander asked the crowd not let anyone question their nationality, and their love for the country, “especially from people who had no role in the country’s Independence”. He also called for a civil disobedience movement to counter the government’s NRC programme.

“Gandhiji taught us civil disobedience when he along with 70,000 people went to jail for making salt and defying the British. He taught us to resist discriminatory policies of the government by rejecting such laws made by the government. I’m pledging that I will not submit my papers to the government. Let them put me in a detention centre. We will fill them up by not submitting our documents,” Mander said to an elated crowd.

Mander also reiterated his previous statement that he will declare himself a Muslim if CAB is passed and then refuse to submit any documents to NRC. 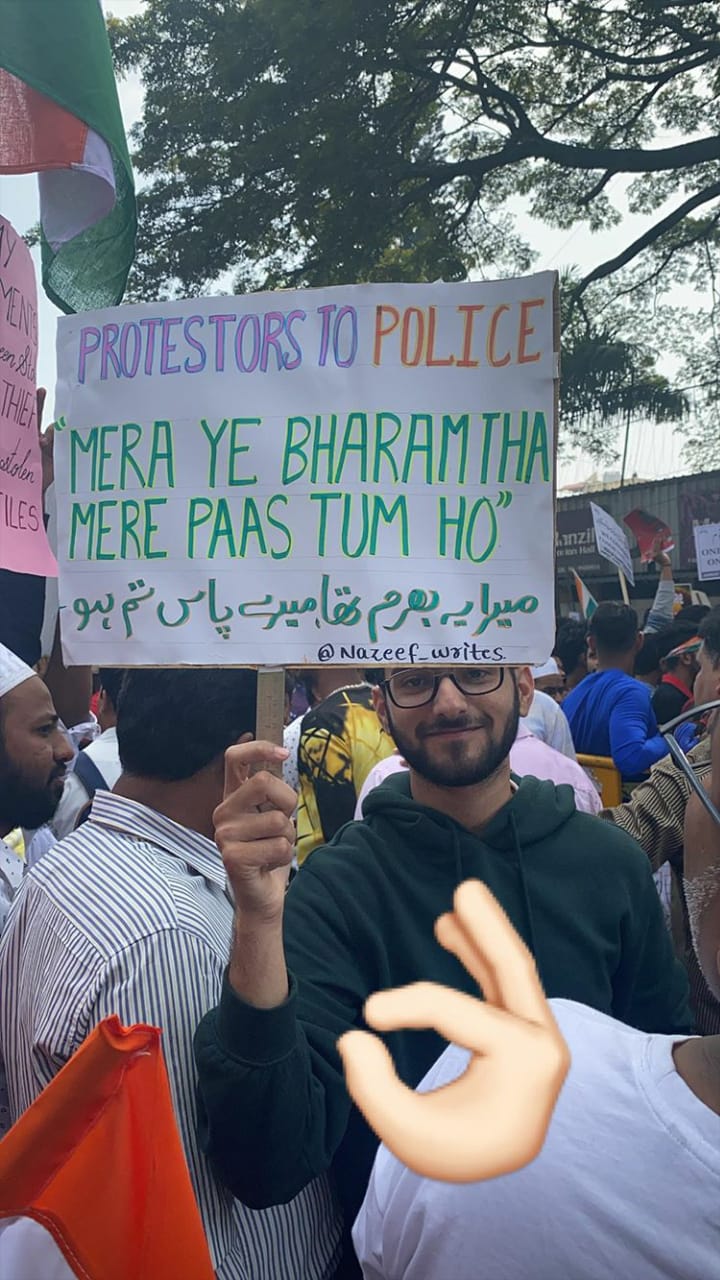 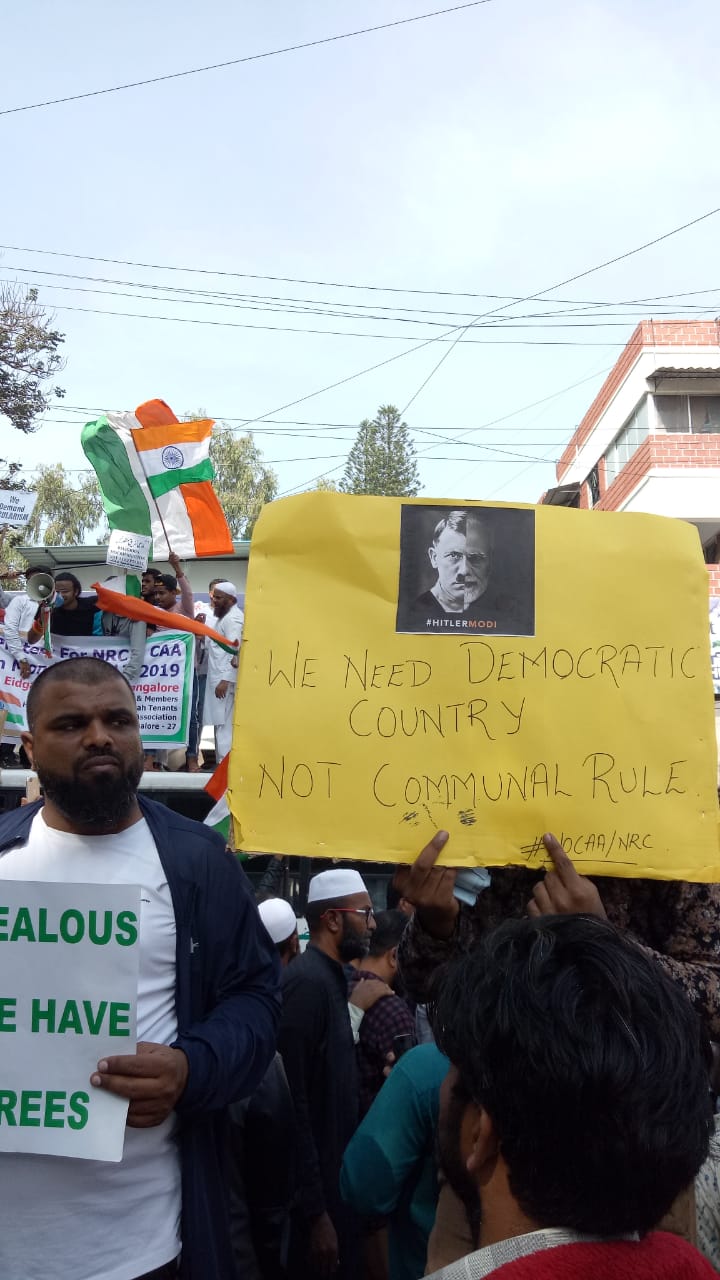 Former IAS officer Shashikant Senthil, who resigned from his post as Deputy Commissioner of Dakshina Kannada district earlier this year citing intolerance on behalf of the government, was also present. Senthil too called for a civil disobedience movement and said that the government’s plan to create sectarian discord in the country has backfired.

Thanking the students of Jamia Milia Islamic, Aligarh Muslim University and other colleges to leading the way, he asked the government to roll back CAA and NRC as soon as possible or protests will continue. “We will fill up your detention centres until there is no more space. We will start the civil disobedience movement,” he said to thunderous applause.

He said there is no need for NRC anywhere in the country, and asked Muslims to refrain from submitting documents for the same.

He especially urged Muslim NGOs and Masjids to refrain from collecting people’s documents, as this would be detrimental to the community. 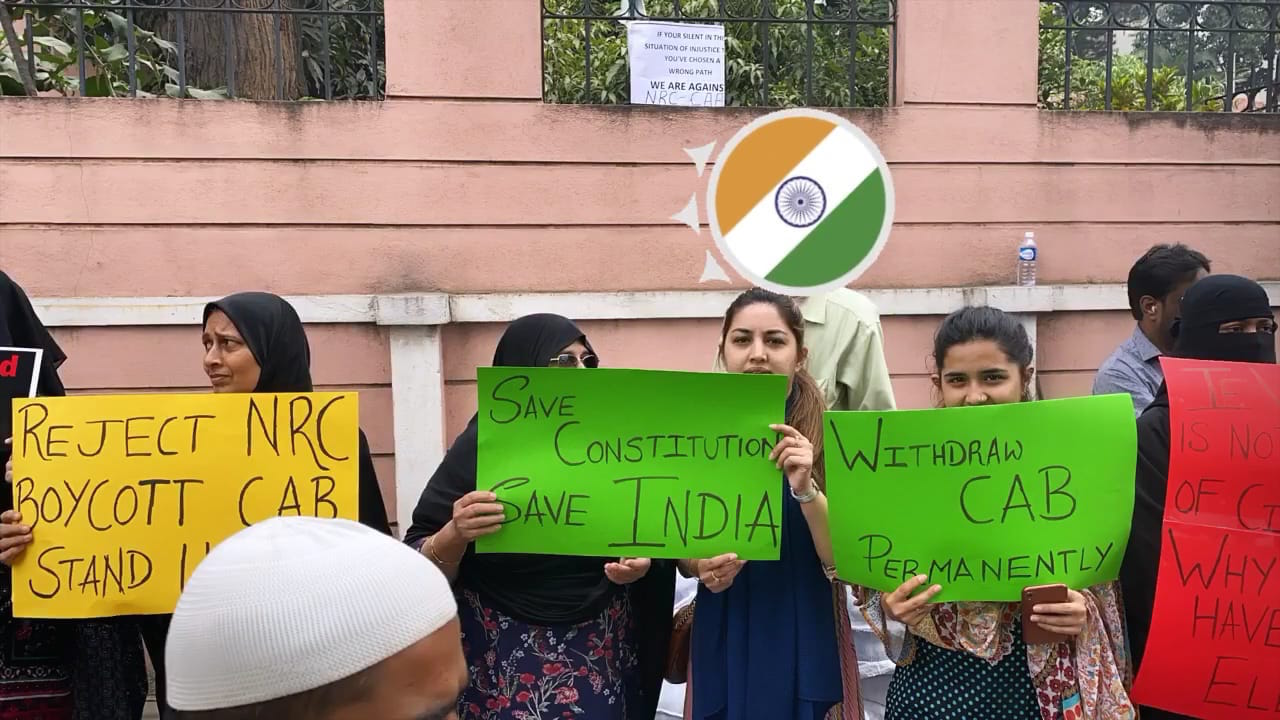 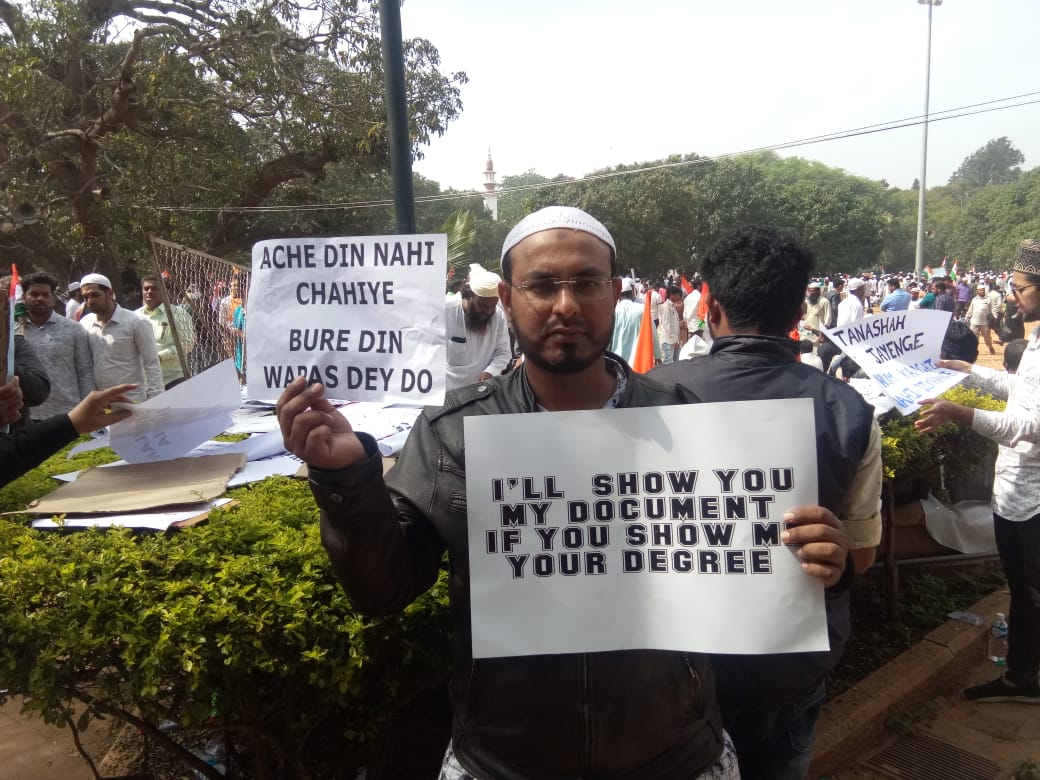 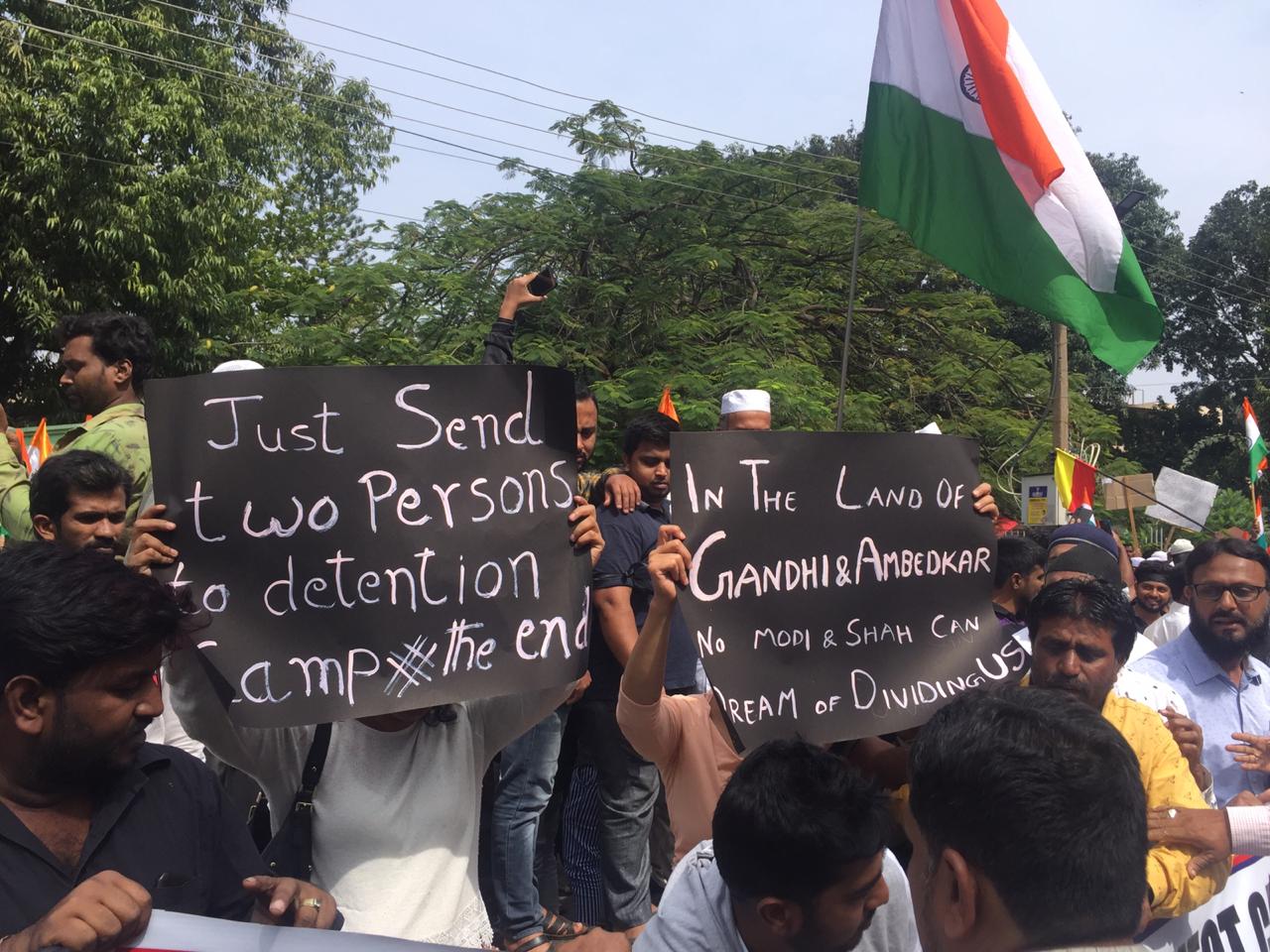 Retired Supreme Court Judge Gopal Gowda, who was also present at the protest, read out the Preamble of the Constitution along with several lawyers. 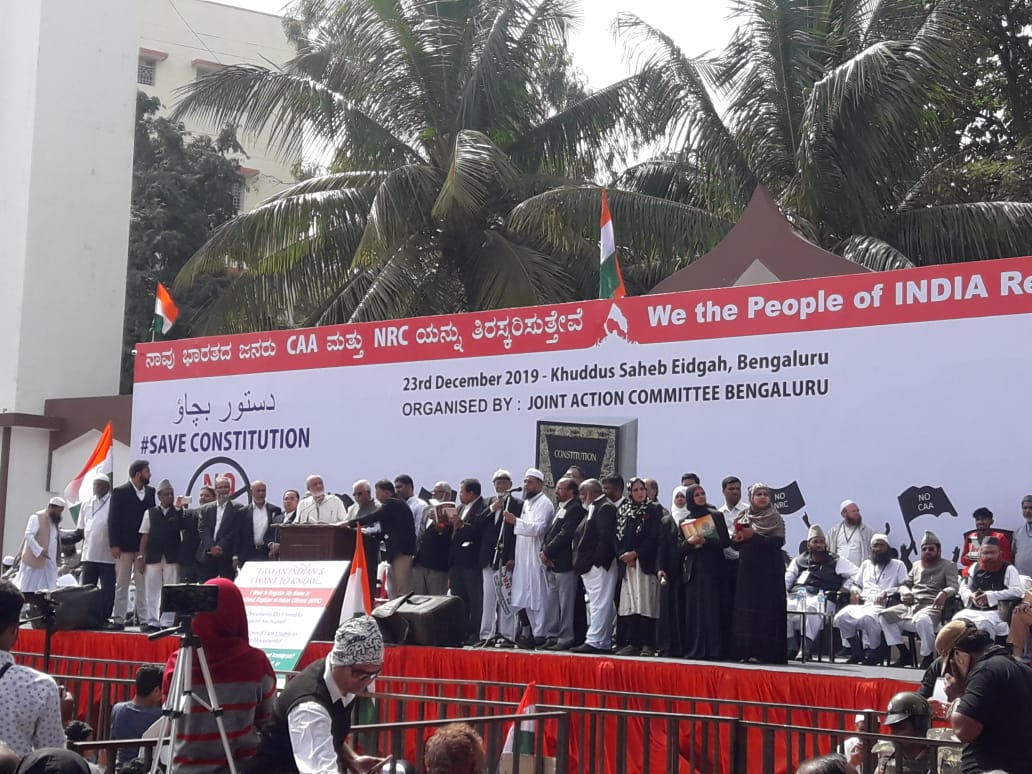 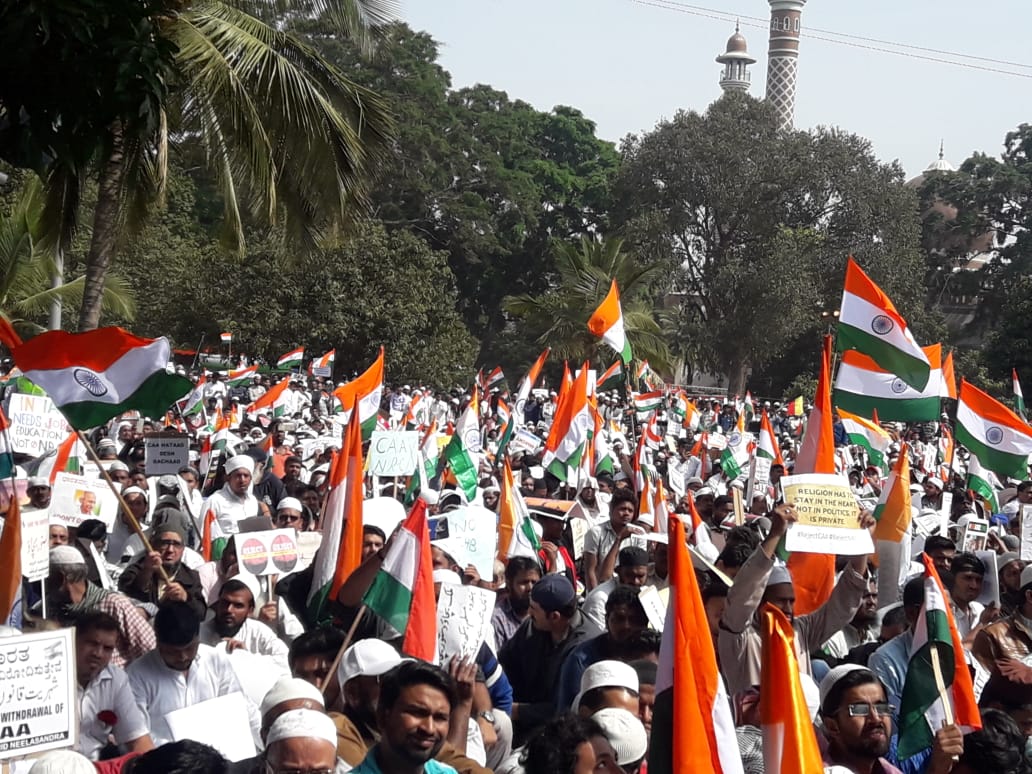 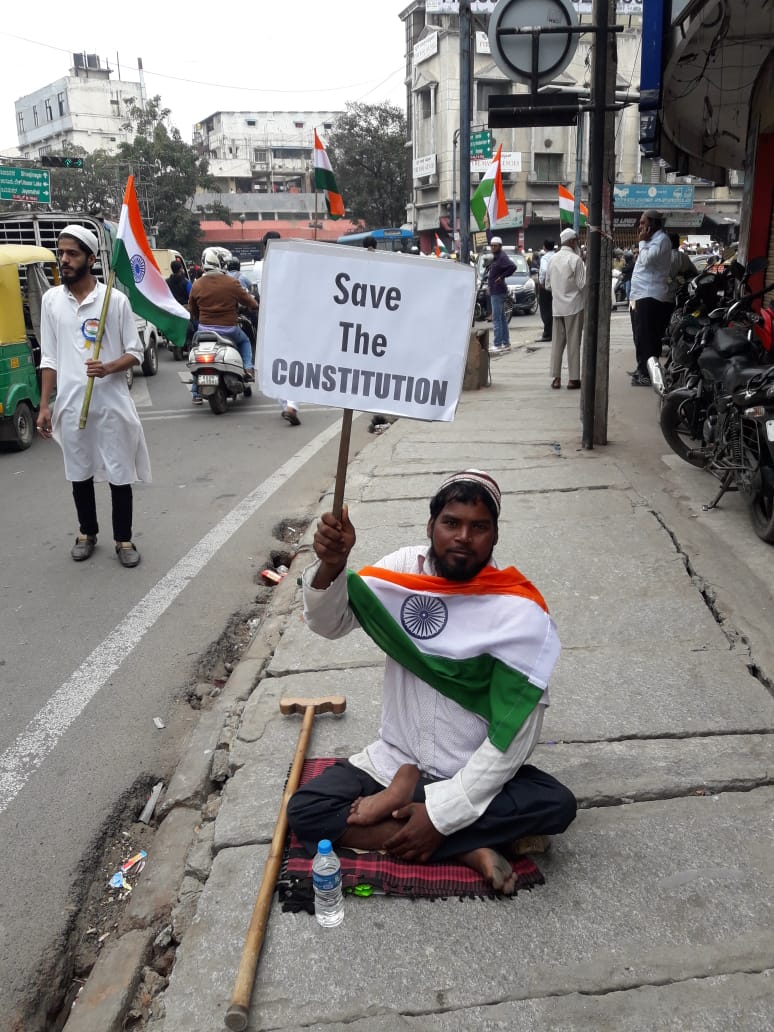 Maulana Tanveer Hashmi, Maulana Maqsood Imran Rashadi, Maulana Iftikhar Qasmi, Sheikh Ajaz Nadwi, and other eminent Islamic scholars said that there is a large scale conspiracy to change the Constitution of the country by bringing in CAA, NRC and other discriminatory laws. They said that the Muslim community will continue the struggle against CAA and NRC until it is taken back.

The protest, which was earlier announced to be organised on Saturday 21st was postponed to Monday 23rd after the B.S.Yediyurappa-led BJP government imposed Section 144 and cancelled all permissions for agitation against the act on 19 December. However, despite restrictions, which was later challenged in Karnataka High Court, which reprimanded the State government for curtailing fundamental rights, protests continued unabated in different parts of Karnataka, including in Bengaluru and Mangaluru.

In Mangaluru, two people were killed by the police, when the police opened fire on protestors near the Bunder area of Mangaluru.

The section has been revoked since Sunday and the number of protests has only increased.

Anti Citizenship Act (CAA) demonstrators across India are carrying out peaceful protests as anger swells against the law, seen as anti-Constitutional and anti-Muslim.