The FIR About the Alleged IM Members Arrested from Bengaluru and Bhatkal Raises too Many Questions, but Answers None
Advertisement https://pagead2.googlesyndication.com/pagead/js/adsbygoogle.js 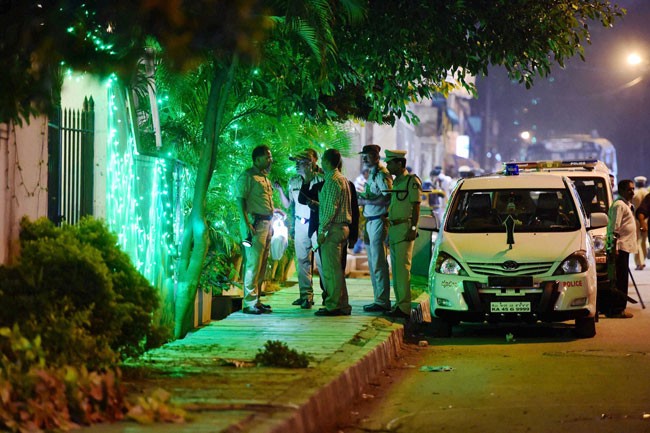 Bengaluru: On the 8th of January the Bengaluru police and sleuths of the Internal Security Division of the State police, “picked up” three alleged terrorists from Bengaluru and Bhatkal, all hailing from the coastal town of Bhatkal in Uttara Kannada district.

According to the police, Dr. Syed Ismail Afaq, Abdus Saboor and Saddam Hussein, were members of the banned Indian Mujahideen (IM) outfit, and were planning to trigger blasts in Bengaluru and in various parts of the country. During the raids on the house of Abdus Saboor, the police claimed to have seized huge cache of explosive substances, including ammonium nitrate, detonators, electronic timer devices, digital circuits, circuit-making materials and fuel oil.

Their motive, the police say was to allegedly disrupt the financial stability in the country, and scare away foreign investors and investments.

However, since the arrest, eyewitness accounts of Saboor’s neighbours in Bhatkal have drawn a different picture, contradicting what the police have claimed so far. Even the FIR copy of the case, which The Cognate has a copy of, raises too many questions, but answers none.

According to the FIR copy, what is termed as “arrest” was done, after a complaint lodged by K.P. Ravikumar, Asst. Commissioner of Police, C.C.B, Bengaluru city on 8th of January 2015. It states that Mr. Ravikumar, with other police officials and Panch went to Majestic railway station to identify Dr. Syed Ismail Afaq and Abdus Saboor, who had arrived to the city from Bhatkal that morning.

The police officials claim, they then went to Dr. Afaq’s house at Vainaad Residency, Cox Town, Bengaluru and arrested him and Saboor. After finding that Saddam Hussein was in charge of safeguarding the knowabouts of the alleged seized materials in Saboor’s house, the police then “arrest” Hussein in Bhatkal.

According to Cr.P.C section 100, “when any officer authorised for search of any place by warrant under the provision of sec 100(4) it is mandatory for the officer making such search to call upon two or more independent and respectable inhabitants of the locality and perform search. He may issue order to any person for such Panchnama.”

It further states, “that, search shall strictly be made in the presence of Panch and list of all things be prepared and signed by concern Panch witnesses. Copy of this list also to be provided to occupant of place. Moreover it is also provided u/s 100–8 that, if any person without reasonable cause refuse or neglect to attend and witness a search he shall be deemed to committed offence u/s 187 IPC.”

From what we know from the claims made in the FIR, and counter claims made by the accused’s family and neighbours, the Panch witness, as claimed by the police, did not include any independent and respectable inhabitants of the locality, either in arrests made in Bengaluru or Bhatkal. In fact, contrary to what is claimed by the police, all three accused were “picked up” from outside their houses, and none of the family members were informed about the arrests.

The manner in which the trio were picked up also questions the necessity of such an “arrest”, when all of them, could be detained right in their houses.

The FIR also states the timing of the entire operation from 8.30 AM to 1.30 PM. However, according to the family and neighbours of the accused, Saddam Hussein was picked up by plain clothes men on 8th January at 7.30 AM at a bus stand, where he had gone to send the marriage cards of his sister by bus to another town. Dr. Afaq, his brother Abdul Azeez and Saboor left house at around 10 AM, and were picked up somewhere outside that time, outside their house.

Azeez, who was later released after questioning, said that he was made to sign on a arrest intimation in respect to Dr. Afaq and Abdus Saboor.

In the story published by The Cognate on Friday 9th of January, we had qouted local media sources in Bhatkal, which have reported eyewitness accounts, who claim that the house of Saboor was “broken into, and the police allegedly unloaded a carton box containing some items from their vehicle and carried inside the house.” According to them, this was around 3 pm in the afternoon Thursday.

They further report that “the police finally exited the house around 7 pm with a big bag said to be containing the big catch.

Question? How could the FIR be filed, when the operation was still underway, and why does it claim that Dr. Afaq and Abdus Saboor were arrested first, while it was Saddam Hussein who was the first one to be picked up.

Why did the Panch witness, not include anyone from either of the neighbourhood, where the accused lived, and why did the police not disclose the items of the said materials to the local media in Bhatkal or the citizens who had gathered around the house.