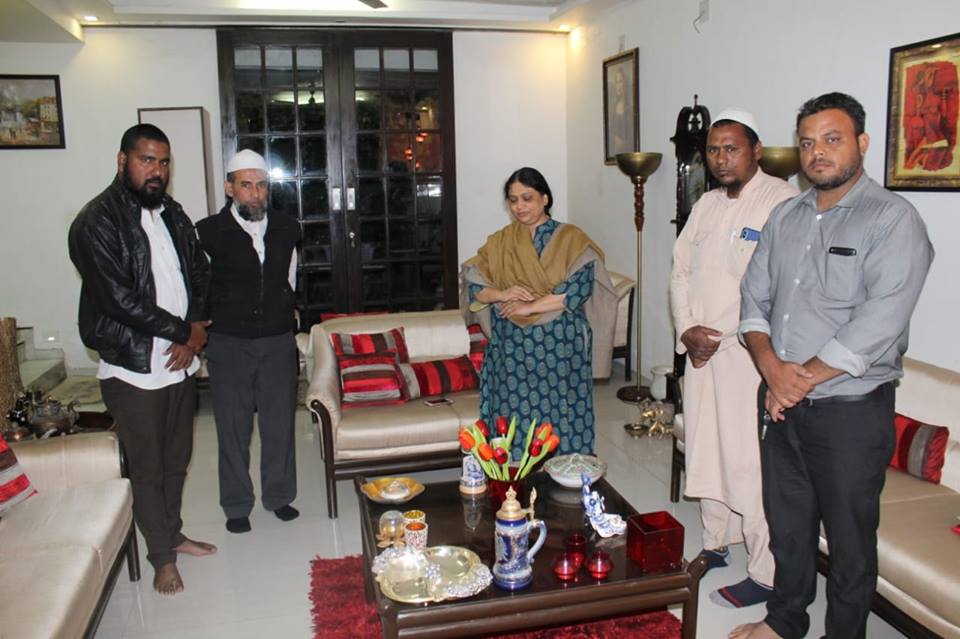 A delegation of Social Democratic Party of India (SDPI) from Gujarat on Wednesday met the wife of Former IPS officer Sanjiv Bhatt and extended the party’s support to her family.

A whistle-blowing officer, who is an important witness in cases related to the 2002 Gujarat anti-Muslim pogrom, Sanjiv Bhatt was arrested on September 5, 2018, in a 23-year old case of alleged planting of drugs to arrest a man in Banaskantha district of the state. He has been in jail ever since.

The delegation consisting of SDPI Gujrat Working State President, Abdul Hamid, State Secretary, Ikramuddin Shaikh, Hanif Sheikh, Adv. Mehmood Ahmad and Irshad Lilgar, met Bhatt’s wife, Shweta Bhatt at her residence, days after she and her son escaped a suspicious accident, where their car was hit by a truck in broad daylight.

The family has alleged a possible foul play in the incident, as the truck that rammed into their car did not have a registration number plate, and the driver was not carrying any documents. Curiously, the driver has claimed that he was hired by a contractor of the Ahmedabad Municipal Corporation.

The car hit by an “unregistered” beacon-light flashing truck.

Sacked by the Gujarat government in 2015, Sanjiv Bhatt has been at loggerheads with the state authorities ever since he filed an affidavit in the Supreme Court in April 2011 against the then chief minister Narendra Modi concerning Modi’s alleged role in the 2002 Gujarat anti-Muslim pogrom.

According to Bhatt, in a meeting held on February 27, 2002, in Ahmedabad, which he attended, Modi allegedly told police officials to let Hindus vent their anger against Muslims, thus leading to the massacre of Muslims in the state.

Bhatt was suspended from the Gujarat police shortly after he submitted his affidavit due to “absence from duty” and eventually sacked in August 2015.

Bhatt’s allegation about Modi’s alleged role in the killing of Muslims and the inaction by the Gujarat police in stopping the massacre has led to his and his family’s hounding ever since.

In July last year, his security cover was removed, despite the government being fully aware of the threats on his life, as one of the key witnesses of the 2002 case.

A couple of days later, the Ahmedabad Municipal Corporation (AMC) without any notice demolished parts of Bhatts’ house, causing irreparable damage to the structural integrity of the entire house.

On September 5, the CID Crime branch entered his house at 8 AM on the excuse of seeking his statement. “The CID Crime Branch officers entered our bedroom while I was sleeping there, in full knowledge, shamelessly invading my privacy, despite Sanjiv having already met with them and changing to leave with them,” Shweta Bhatt says.

Bhatt’s bail application before the district court was kept pending for three months and was then dismissed. On December 12, 2018, Bhatt made a bail application before the Gujarat High Court. It was listed to be seen by Justice Kokje on December 19, but the judge ordered, ‘Not before me.’ It was then listed on December 21 before Justice SH Vora. Then it was listed on January 8, 2019, then on January 10 and finally January 11 before Justice Sonia Gokani, who has listed the case for January 15.

“This is part of the preparations for 2019 elections – Modi and Amit Shah want to make sure that all dissidents are silenced and old cases are wrapped up,” The Wire has quoted Bhatt’s wife as describing the case against her husband.

The Karnataka Waqf Board has issued a circular barring the use of loudspeakers between 10 pm and 6 am during azan for all the...