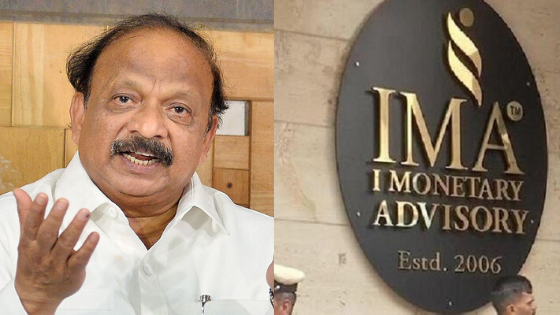 Trouble and humiliation for discredited former MLA R Roshan Baig do not seem to be abating. BJP working president JP Nadda today categorically stated that the former Congress leader cannot join the saffron party until his name is clear in the IMA multi-crore scam case.

Baig and his son Ruman had made an announcement on social media on Wednesday that he will be joining the BJP officially, along with the other disqualified legislators, but his name was dropped from BJP’s official list of people joining the party on Thursday.

When asked about Baig’s absence from the induction program, Rural Development and Panchayat Raj Minister KS Eshwarappa, furiously replied, “How many times do we tell you all we don’t want Roshan Baig. BJP doesn’t want Roshan Baig.” However, he refrained from giving a reason for the party’s stance on not inviting Roshan to join.

After Khan went absconding, an audio clip purportedly by him surfaced on social media, in which he blamed Baig for extorting hundreds of crores for him, because of which his company had suffered losses.

In a video, Mansoor claimed that he paid Rs 400 crore to Baig which had not been returned to him.

In July, under the previous Congress-JD(S) coalition government, Baig was detained by the Special Investigation Team (SIT) from Bengaluru’s Kempegowda International Airport, in connection with the scam.

Baig was under suspension from the Congress party, and the then Cheif Minister H D Kumaraswamy had accused the BJP of helping him allegedly escape from the probe. He was later released after questioning.

Baig was first elected as the MLA in 1985 and worked as a minister in the Janata Party government headed by JH Patel. In 1999, when the Janata Dal split to form the Janata Dal (Secular) headed by HD Deve Gowda, and the Janata Dal (United), he decided to move to the Congress. He was elected six times as a Congress MLA and became a popular figure of the party in the city.

However, his political downfall started when he was overlooked in favour of B.Z. Zameer Ahmed Khan, who became the Minister for the Haj and Wakf Board under former Chief Minister Siddaramaiah.

In the aftermath of the Lok Sabha elections, Baig earned the wrath of the Congress leadership after he lashed out at party leaders for its poor performance. He held former Karnataka CM Siddaramaiah’s “arrogance” and state Congress president Dinesh Gundu Rao’s “immaturity” responsible for the “flop show”. He had also called AICC general secretary K C Venugopal a “buffoon.”

Later, he had dropped hints of quitting Congress and joining the ruling BJP in a TV interview. He had even appealed to Muslims to “compromise” with the situation, on BJP returning to power, which drew a lot of criticism among his constituents, a majority of who are Muslims. “If BJP comes back to power, I humbly appeal to my Muslim brothers to learn to compromise with the situation,” he had said.

Baig, along with 16 other MLAs, were disqualified by then-Speaker KR Ramesh for rebelling against then Karnataka CM HD Kumaraswamy and missing the trust vote. In their absence, the Congress-JD(S) government failed to prove the majority in the assembly and subsequently their disqualification brought the assembly numbers down, allowing the BS Yediyurappa-led BJP to comfortably stake a claim at power with just 105 seats and support from an independent.

Since his disqualification, Baig tried hard to make a transition into the BJP, which he had denounced and berated throughout his political career. He and his son started visiting Hindu temples to appease the BJP leadership and Hindu vote bank and even said he would volunteer for the construction of Ram Temple in Ayodhya. But despite going head over heels, many in the BJP leadership and party workers did not want Baig to be either named as the candidate or even be allowed to join the party, because of his history and his Muslim identity.

Baig had planned to field his son Ruman Baig as the BJP candidate in Shivajinagar. But with the BJP officially naming M Saravana as the party’s candidate in the area, Baig stands humiliated and both his and his son’s political future hangs in the air.