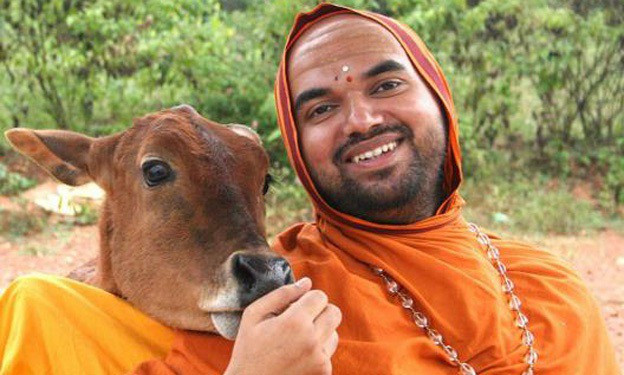 Ramachandrapura Mutt pontiff Raghaveshwara Bharathi Swami, who was accused by a female devotee of raping her 168 times over the period of 4 years, will reportedly be leading an agitation to shut down meat shops in Bengaluru.

The rape accused Swami is joined by groups like the Gau Samrakshana Prakoshta and Karnataka Federation of Gaushaalas, who allege that as many as 1,700 meat shops in Bengaluru are “illegal”, and “only 43 meat shops in the state capital were functioning with a valid licence from local authority BBMP.”

Raghaveshwara Bharathi Swami, whose original name is Harish Sharma, shot to national limelight in 2014, after a 48-year old singer accused him of repeatedly raping her. She accused that she was also taken to religious functions with the Swami to numerous places across India, where she was sexually abused.

According to the report published in DNA on 23rd Oct 2015, Bharathi “coerced the singer into complying by telling her that she would be cursed by God Rama if she didn’t. The victim was also reportedly scared that her husband would leave her if he knew what had happened and that her two daughters would be harmed. Bharathi had told her that he was part of the ‘Bhoga Mardhanala’ tradition which meant he could have sex unlike other swamis.”

Bharathi was later discharged in the case, even before trial and framing of charges.

Bharathi had challenged the Constitutional validity of Section 53 A of the Code of Criminal Procedure. Section 53 A mandates medical examination of a rape accused and Bharathi was unwilling to undergo the test. The petition was rejected.

While the Bengaluru development minister KJ Geroge has in strong words condemned the supposed agitation, saying that the ‘government would never allow communal politics to thrive in Karnataka,’ will Bengalureans allow a rape accused to take their city for a ride, by fermenting communal violence? Or will they say no to this hatred?