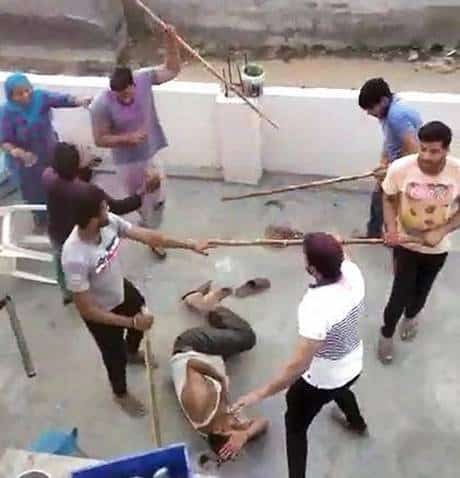 In a shocking travesty of justice, the Gurgaon police have filed an attempt to murder case against a member of the Muslim family, who was mercilessly beaten up, along with his relatives by a gang of terrorists in Dhamaspur village last week.

Police have booked a case against Dilshad, who was attacked along with his other family members.

The case was filed by Rajkumar, an accused in the case. In his complaint, Rajkumar has alleged that the members of the Muslim family had beaten him up when he was riding a bike. “I was going on a bike when a ball hit me. When I objected, I was beaten up by people who were playing there. Some people rescued me. I was admitted in the hospital and when I got to know that I have a case against me, I left the hospital,” he said.

However, according to earlier reports, which was also confirmed by their own family members, Rajkumar was on a bike with his friend and main accused Mahesh Kumar, when the alleged argument over a cricket game turned into a terrorist attack against the Muslim family.

“I fail to understand what kind of system this is. The entire world has seen in a video that we were roughed up, my hands were broken. Members of my family are still languishing in the hospital and now the police have filed a case against us. This is a bizarre injustice,” The Citizen quoted Dilshad as saying.

“It has become a trend on the part of the state machinery to file cases against families who were victimized so they give up on their determination to get justice. This happened in Afrazul’s case, Pehlu Khan’s case, and now we are in the same league,” he added.

The family is so scared and shaken by the incident that they have decided to leave Gurgaon and move to Delhi due to immense pressure, fear and threats.

“We are living under immense fear and trauma since the incident. The families of the alleged youths involved in brutal assault are now putting pressure on us to withdraw the FIR and settle the case, or face consequences,” NDTV quoted Mohammad Akhtar, who was present in the house at the time of the attack.

Akhtar alleged that some people of Bhup Singh Nagar and adjoining Bhondsi village were visiting their home threatening them with dire consequences and making lewd comments on the women members, all in the presence of police personnel.

A gang of 20-25 men attacked a Muslim family and their guests with swords, spears, sticks at Dhamaspur village in Gurgaon around 5 pm on March 21 on Holi.

The family had come under attack after the gang of terrorists approached the boys from the family, who were playing cricket outside, and demanded that they “go to Pakistan and play”. A video showing members of the family, including women screaming for help in fear as the terrorists with rods and sticks barged into their home, emerged on social media.