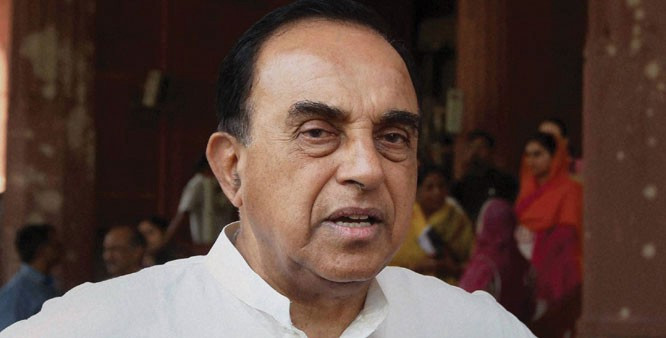 Bengaluru: Bengaluru Police has registered an FIR against BJP leader Subramanian Swamy for “inciting religious hatred”, through his speeches and social media posts between different communities in the country.
In a complaint filed in the JP Nagar police station, the complainants have alleged that Mr. Swamy uses, “blatant lies to deliberately instigate communal hatred between communities,” and has urged the police to take stringent action against him.

“His allegations on social networking site, Facebook are of very inflammatory nature, which could lead to building distrust between communities and divide the peace loving citizens of the country, and lead to communal riots in the country. Specially the regions of Meerut-Muzaffarnagar-Sahranpur are already facing tensions due to other incidents and someone like Swamy making irresponsible comments to promote hatred between Hindus and Muslims adds fuel to Fire,” the complaint states.

Mr. Swamy, who is no stranger to controversy, drew the ire of at least three complainants and irked many more, when he, commenting on the recent alleged Meerut rape case, posted on his Facebook page that, “this girl was a teacher in a Madarsa on the salary of just 1500, Madarsa official kidnapped her, She was drugged and kept in captivity, Raped many times, Her Fallopian Tube was removed so that she could never become pregnant, She was forcefully converted into Islam, She finds 40 more girls in Madarsa who were told that they will be sent to Saudi Arabia to marry Sheikhs. The girl somehow escaped from their captivity.”

Calling on his followers to act against the alleged rape, his Facebook post further states that, “She isn’t asking for your sympathy, or candle marches for that matter. Just give a minute of your thought to what’s happening in a country where people take pride in religious tolerance, profess mutual trust. And think, what kind of special blind them people are who have their heads sunk deep in the sand, refuse to see the writing on the wall and cry “..don’t give this a communal color” even though the reality begs to differ. Sometimes it’s hard to decide who the real enemy is…The jihadis who are perpetraters of the crime/terror or the ones who try their best to hide those criminals behind the veil of secularism. You decide.”

Speaking to The Cognate, the complainants Mr. Faisal Syed and Mr. Ameen Khan said that, “he is belittling the respectful madrasas and inciting hatred within the peace loving citizens of the country, in times when a small burning coal can escalate into a fire-ball, he should be more responsible while making such outrageous comments”.

The complainants are from the Bengaluru-based human rights group, Mission Possible for Justice and Rights (MPJR).

Quoting media sources Mr. Syed further added that, “the Investigating Officer has said that the girl had eloped with her boyfriend, and it was the girl’s father who lodged an FIR against him and three of his family members, alleging that his daughter was abducted”. He asked, “how can Mr. Swamy make such fallacious statements based on flimsy reports while the investigation is still ongoing”.

According to Mr. Syed, the complaints have been lodged in three different police stations so far, and the case is registered under Section 153, 153A (spreading enmity between communities) and 295, 295A (deliberate and malicious acts, intended to outrage religious feelings of any class by insulting its religion or religious beliefs) of Indian Penal Code.