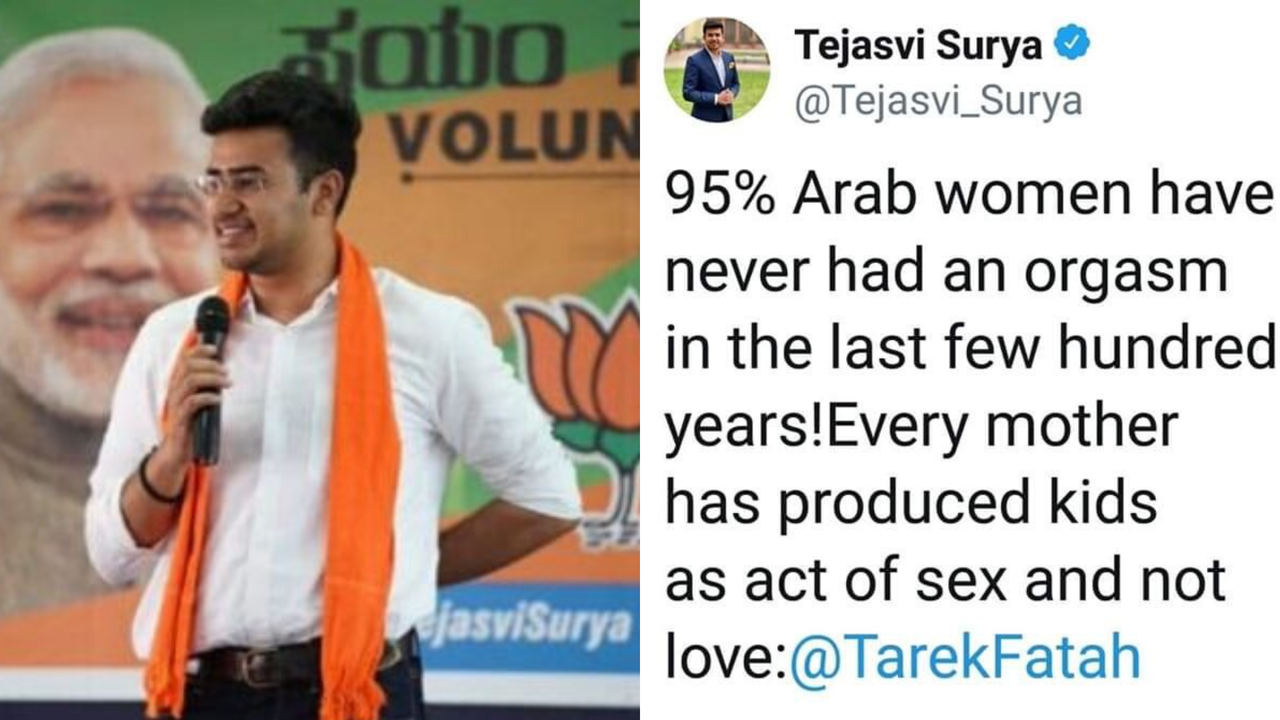 Tejasvi Surya, the BJP MP and a rabid Islamophobe is facing severe backlash on social media in the Arab world, after his old disparaging and misogynist comments on Arab women resurfaced online.

The now-deleted tweet, dated March 23, 2015, said, “95% Arab women have never had an orgasm in the last few hundred years. Every mother has produced kids as act of sex and not love”. 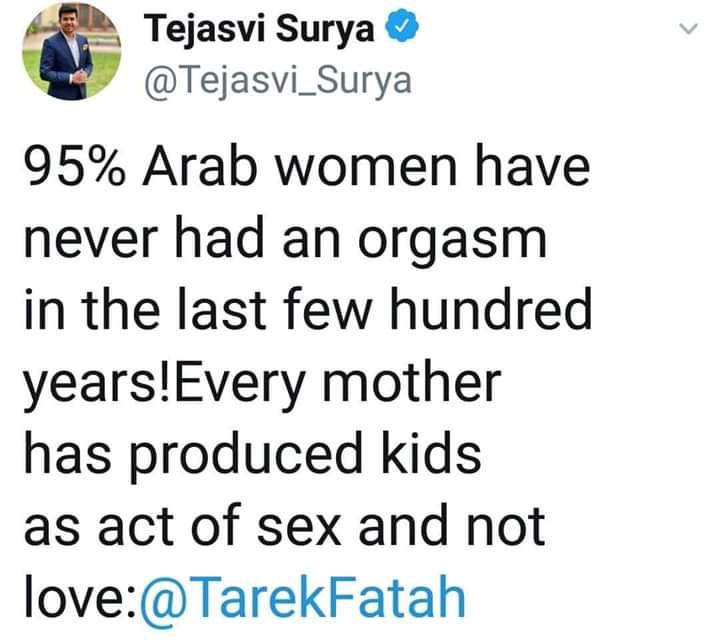 Surya, who had tweeted the quote from anti-Muslim troll and darling of the Hindutva brigade, Tarek Fatah, had even justified the comment by added that “Islamofascism is a great threat to civilisation”.

He later tweeted "Having said that, I agree with him that islamofascism is grave threat to civilization" pic.twitter.com/b2ZxLEAxwb

Screenshots of Surya’s tweet were widely circulated hours after Prime Minister Narendra Modi tweeted, “COVID-19 does not see race, religion, colour, caste, creed, language or borders before striking.” Modi’s hurried comment had come in reaction to the criticism India is getting internationally for the ongoing hate campaign against Muslims in the country.

Among the first to slam Surya for his tweet was Dubai-based businesswoman Noora AlGhurair, who said she “pitied the upbringing that has taught him to disrespect women”. She also warned him against “travelling to Arab lands if he is ever bestowed a foreign ministry”.

Pity Ur upbringing @Tejasvi_Surya that respect for women couldn’t be instilled in U despite India having some great female leaders .Please note if someday the govt bestows a foreign ministry to you, avoid travelling to Arab lands. You are not welcome here. This will be remembered pic.twitter.com/KJJlqJL5tR

Abdur Rahman Nassar, an intellectual from Kuwait, who tagged Prime Minister Narendra Modi while criticising the tweet, requested for Surya’s Parliament membership to be cancelled.

Prime Minister ..
An Indian Member of Parliament accuses Arab women, and we Arabs are asking for his membership to be dropped !!@narendramodi@PMOIndia pic.twitter.com/aQl4XayWZU

The outrage was also shared by Mejbel Al Sharika, a Kuwaiti lawyer and Director of International Human Rights, shared the screenshot of the tweet and urged Twitter to suspend Surya’s account for his racial slur, which badly wounded the Arab sentiment.

@PMOIndia Respected Prime minister @narendramodi India's relation with the Arab world has been that of mutual respect. Do you allow your parliamentarian to publicly humiliate our women? We expect your urgent punitive action against @Tejasvi_Surya for his disgraceful comment. pic.twitter.com/emymJrc5aU

A few days ago, Mejbel Al Sharika had volunteered to adopt the cause of Indian Muslims before the United Nations Human Rights Council, inviting lawyers and human rights activists to join him in the cause.

Brother jamal Abul Hassan, ex parliamentarian , Bahrain has just joined me in supporting the cause of Indian Muslims. Let all know that I am from Kuwait and everyone here who stands for Human rights is united in the fight against Hindutva fascism!#india

As the hate campaign against Muslims in India was exposed for the world to take notice, Indian ambassador to the UAE, Pavan Kapoor, tweeted on Monday, “India and UAE share the value of non-discrimination on any grounds. Discrimination is against our moral fabric and the Rule of law. Indian nationals in the UAE should always remember this.”

India and UAE share the value of non-discrimination on any grounds. Discrimination is against our moral fabric and the Rule of law. Indian nationals in the UAE should always remember this. https://t.co/8Ui6L9EKpc

The Organisation of Islamic Cooperation also issued a statement expressing deep concern “following recent media accounts of rising anti-Muslim sentiments and Islamophobia within political and media circles and on mainstream and social media platforms, where Indian Muslim minority is blamed of spreading the coronavirus in the country”.

1/2 #OIC-IPHRC condemns the unrelenting vicious #Islamophobic campaign in #India maligning Muslims for spread of #COVID-19 as well as their negative profiling in media subjecting them to discrimination & violence with impunity.

2/2 #OIC-IPHRC urges the #Indian Govt to take urgent steps to stop the growing tide of #Islamophobia in India and protect the rights of its persecuted #Muslim minority as per its obligations under int"l HR law.

Last week, Princess Hend al Qassimi of the Sharjah Royal Family had warned Indians spreading hatred against Islam and Muslims of serious consequences “you make your bread and butter from this land which you scorn and your ridicule will not go unnoticed.”