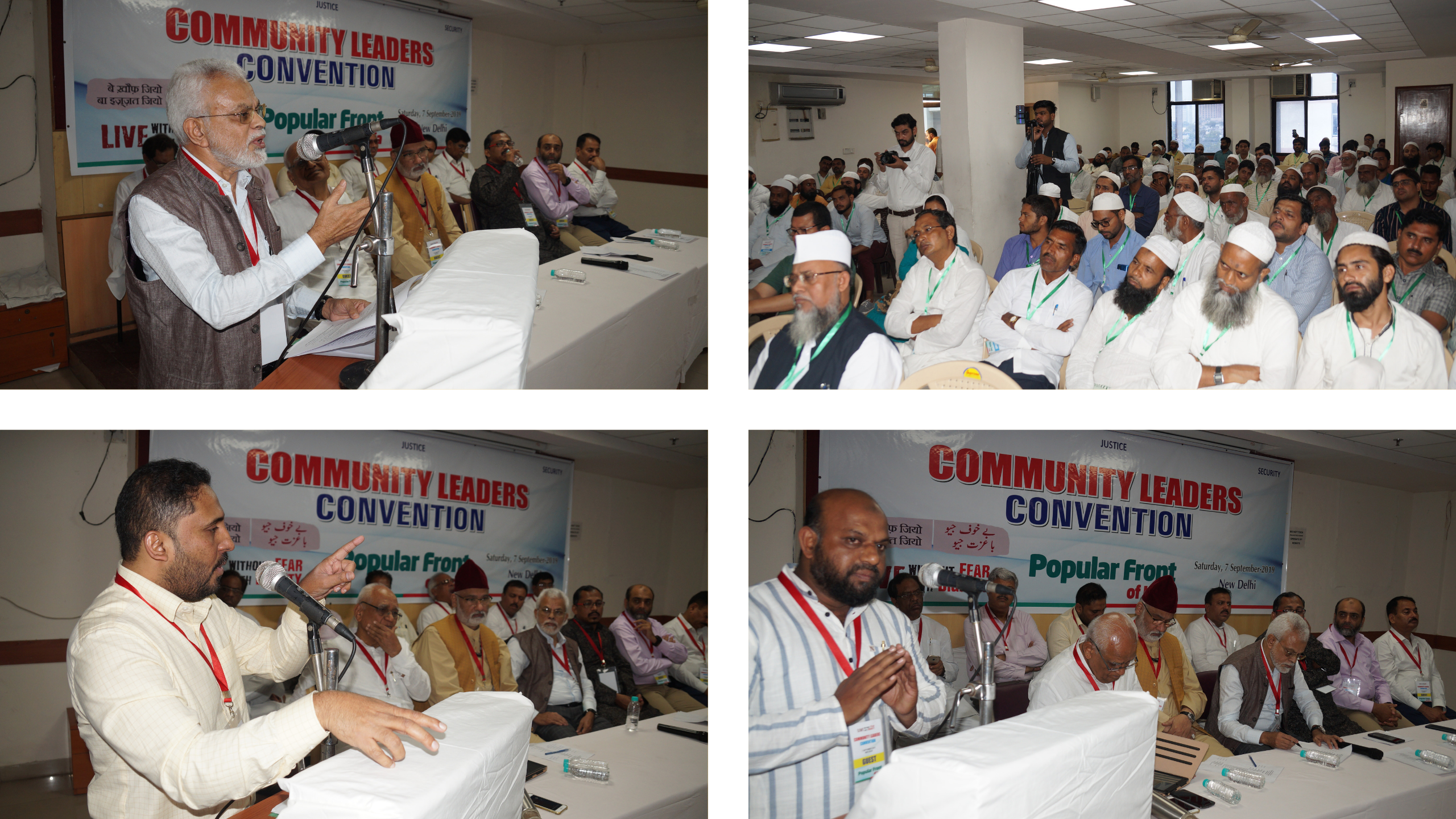 In an effort to unite Muslim community leaders and organisations in building a broad-based alliance to defend civil and constitutional rights in the country, Popular Front of India (PFI) convened a “Community Leaders Convention” on Saturday 7 September in New Delhi. The convention was attended by more than 200 delegates from Delhi and adjacent states representing different local organizations and institutions.

The press release from PFI stated that within just three months of coming back to power, the BJP-led Central government has shown that it is determined to implement the core Hindutva agenda at any cost. “They are not bothered about democracy, constitution, and parliamentary procedures while making draconian changes in UAPA, NIA, RTI, etc. The controversial Triple Talaq law is also an act of discrimination against Muslims. Now the government is fully armed with powers to suppress all voices of dissent by declaring not only organizations but individuals also as terrorists”.

PFI chairman E. Abubacker said that the government’s moves are not only against the Muslim community but against all citizens of the country.

“The fascist forces think that they are a well-organized majority, but history makes it clear that many of the well-organized majorities have been defeated by minorities”, he said. He commented that NRC is to be thrown in Ganga-Yamuna, instead of creating fear in the name of keeping documents ready for submitting before NRC.

Anis Ahmed, National Secretary of PFI said the agenda of fascism cannot be changed by appeasing them. He called for a new resistance movement against authoritarianism, the likes of which the country had witnessed during the emergency period.

Former Mumbai High Court judge, Justice B.G. Kolse Patil said if the people really want to defeat fascism, they must come out of their homes and agitate on the streets.

Sayed Sarwar Chishti (Gaddi Nashin Ajmer Sharif) said that with the differences prevailing among the minorities, we can never defeat the fascist forces. If we fail in uniting for this cause, our future generations would not forgive us.

The convention called upon local communities to adopt constitutional and legal measures to ensure a peaceful atmosphere free from fear and hatred. Resolutions were also passed on various issues like amendments to UAPA act and NIA act, abrogation of the special status of Jammu and Kashmir, the proposed implementation of National Register of Citizens (NRC) across India etc.

A district court in Jaipur on Tuesday ordered life imprisonment to 12 alleged members of the Students Islamic Movement of India (SIMI), accused of...