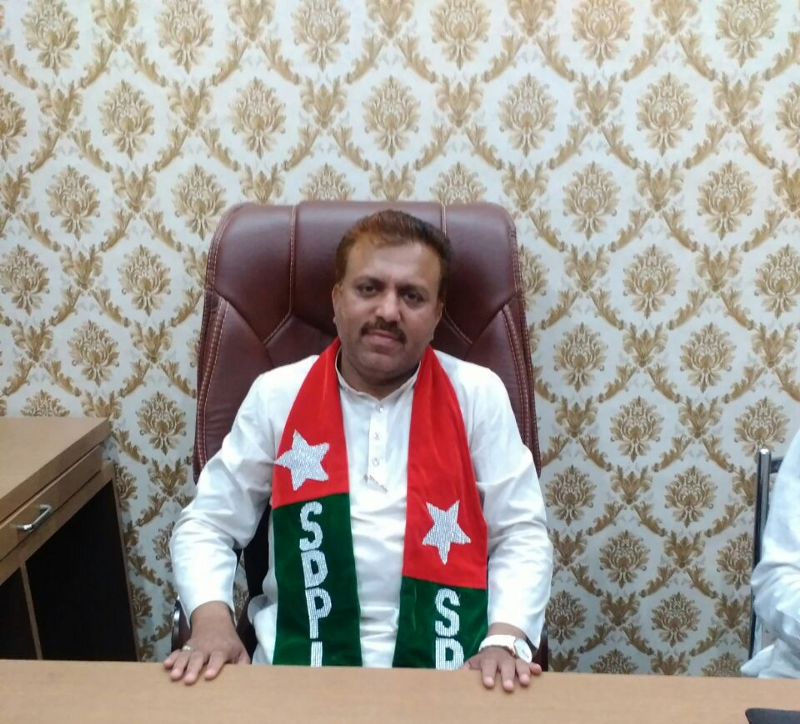 The Narasimharaja Assembly constituency in Mysuru, has been a Congress bastion and a pocket borough of the Sait family for over four decades.

The patriarch of the family, the late Minister Azeez Sait was first elected to the State Assembly from Narasimharaja in 1967. The only time he lost in his long and illustrious political career was in 1994, when Maruti Rao Pawar of the BJP defeated him.

After the death of the senior Sait in 2001, his son Tanveer Sait, the current State Minister for Primary and Secondary Education, has been representing the constituency for the past 16 years.

Although Tanveer Sait is riding on a severe anti-incumbency wave, with even members of the Congress questioning his candidacy, defeating Sait and the Congress in Narasimharaja is no cake walk. But one person, who is determined to unseat the incumbent Minister, is K.H. Abdul Majeed of Social Democratic Party of India (SDPI).

In the last Assembly Election, in 2013, debutant Abdul Majeed lost to Sait with a thin margin of 8,370 votes in a constituency of around 2.5 lakh voters.

Will SDPI be able to get the magic numbers to take power in Narasimharaja, this time?

In an Interview with The Cognate’s Shaik Zakeer Hussain, K.H. Abdul Majeed, explains why and how, SDPI plans to defeat Congress’ Tanveer Sait.

Despite 2013 being your debut election, you polled 29,667 votes and lost to Tanveer Sait with a small margin. What, according to you led SDPI gain such a massive support in Narasimharaja constituency in a short time?

The reasons are quite basic. Even before the election in 2013, and even after our defeat in the election, our party has been at the forefront of attending to people’s needs. We have been at people’s service 24/7.

Whether we win elections or not, our work has always remained constant. Because contesting in elections is only part of our larger goals and objectives.

People in Narasimharaja have seen our work. They are aware of our activities. So, naturally, they supported us in 2013, and we are hopeful they will continue to support us this time as well.

The Sait family has ruled the Narasimharaja constituency for the past four decades. Do you think people are discontent with Tanveer Sait? Could that be the reason, why people are turning towards SDPI?

Narasimharaja is one of the most underdeveloped constituencies in Mysuru. The representative of this constituency, Mr. Tanveer Sait has done next to nothing for the people here, ignoring even their basic needs and demands.

The great majority of people in this constituency are minorities, Dalits and other socially and economically backward communities.

Unlike other dominant communities, they don’t lobby for their rights. They even lack awareness about their rights. So, the responsibility of an elected representative in such a constituency is immense.

However, Mr. Sait has neglected them for the past 16 years. There are wards, where he has not paid a single visit for more than 5 years. He has no interaction with the people here. He has not even interacted with his own corporators for years. This shows his lack of concern and commitment towards the people.

On the other hand, despite losing the last election, I and my cadres have been attending to people’s issues, when ever there is a need for it. So, naturally, people see a ray of hope in SDPI.

The only way Mr. Sait has won elections so far, is by using the name of his father, and by creating the fear of BJP among the people.

Besides Tanveer Sait, you are also facing Abdul Aziz (Abdullah) from the JD(s), who is a powerful Muslim leader in Mysuru. There is also the BJP, and there are tens of other independent candidates. How confident are you of defeating them all?

Firstly, there is a huge anti-incumbency wave against Mr. Tanveer Sait. Irrespective of their caste and creed, people are against him. They want him to be unseated. Even members of Congress want him to go.

But what is the alternative?

People gave us almost thirty thousand votes last time. People are aware that despite losing, we have not abandoned them. And across Karnataka and even in other states, we have been fighting for the rights of the downtrodden. People know that we have the capability to raise their issues in the Assembly. People find an alternative in SDPI.

Coming to JD(s), people, especially Muslims know that there is an adjustment between BJP and JD(s). Let’s take Narasimharaja for instance. JD(s) had never fielded a Muslim candidate here before. During the 2013 elections, Sandesh Swamy of JD(s) had bagged 29,180 votes. Yet, JD(s) decided to give ticket to a Muslim candidate, instead of Swamy.

So, people are well aware of the agenda of all political parties.

We will show everyone that SDPI is not a particular community-based party. We will take up every issue in Karnataka, that concerns the people. Whether it’s the issues of farmers, or Dalits, or minorities or women, we will stand up for everyone.

We know that there are people, who do not want us to raise up. They want our voices to be suppressed. But the people of Karnataka will prove them wrong.