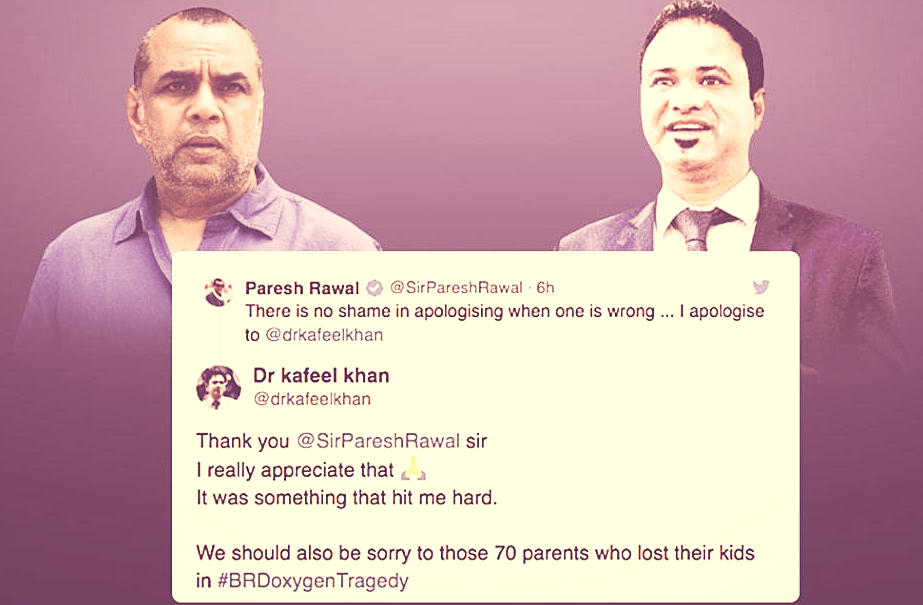 Actor and former BJP MP, Paresh Rawal has apologised to Dr Kafeel Khan, for the derogatory remarks he made against him two years ago, in the wake of the Gorakhpur tragedy.

About 30 children had died at the BRD Medical College and Hospital in Gorakhpur, Uttar Pradesh, during the night of August 10, 2017, and 34 more over the next few days, officials had then said.

Many of the infants died allegedly because of disruption in oxygen supply on the night of August 10 due to pending payments to the supplier, a charge refuted by the Yogi Adityanath-led state government.

Initially hailed as a hero, for trying to source oxygen cylinders and bring them to the hospital to save the children, Dr Kafeel, a paediatrician at the hospital was accused of negligence, suspended and arrested following the outrage over the deaths. His suspension is yet to be revoked.

On Tuesday, Dr Kafeel demanded an apology from the Bollywood actor, quoting his August 2017 remarks wherein Rawal had called him a “hero in the eyes of ever active termite clan”. He had also chided Dr Kafeel when the latter had alleged mistreatment by airport authorities. He had asked Kafeel Khan to stop “playing the victim card”.

Yes but Hero in the eyes of ever active Termite Clan ! https://t.co/RrRrL3AV14

“I demand an apology from you. @SirPareshRawal sir. We are your fan, never thought you had closed-minded and obstinate attitude. Please read enquiry report which absolved me from negligence and corruption. Your bosses won’t but I accept least this from you,” he tweeted.

I demand an apology fm u @SirPareshRawal sir🙏

we r ur fan,never thought u had closed-minded & obstinate attitude
Plz read enquiry report which absolved me fm negligence & corruption🙏
ur bosses won't but I accept least this fm u pic.twitter.com/Rx4JFQW4ZM

On Wednesday, Rawal posted his apology on Twitter, saying, “There is no shame in apologising when one is wrong… I apologise to @drkafeelkhan”

Khan accepted Rawal’s apology and said, “Thank you @SirPareshRawal sir. I really appreciate that. It was something that hit me hard. We should also be sorry to those 70 parents who lost their kids in #BRDoxygenTragedy”

Thank you @SirPareshRawal sir
I really appreciate that 🙏
It was something that hit me hard.

As per the investigation report, Dr Kafeel was neither the nodal medical officer in charge of encephalitis wards at BRD nor documents contesting the same provided by the department were adequate and consistent.

The report also states that Dr Kafeel was not involved in the process of allotting tenders for oxygen supply amounting to corruption, or of medical negligence on his part on the day of the tragedy.

The report also says that Dr Kafeel informed seniors about the shortage of oxygen supply and arranged seven oxygen cylinders on the night of August 10-11, 2017.