“Our Sons are Being Framed, Police Planted Explosives:” Parents of the Accused Arrested in Alleged Terror Case
Advertisement https://pagead2.googlesyndication.com/pagead/js/adsbygoogle.js 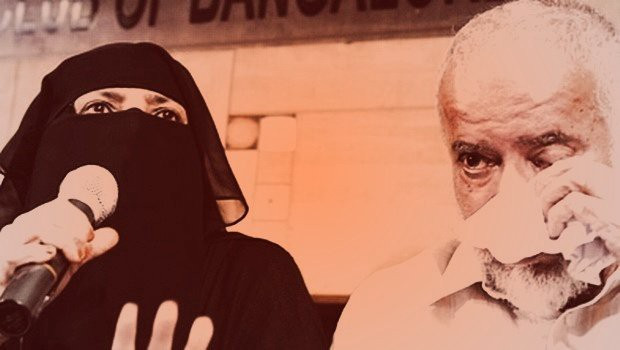 Relatives of the accused. Photo: TNIE

Bengaluru: “Our sons are innocent. They are being framed for the only reason that they are from Bhatkal and are educated,” said the parents of the youths arrested for alleged terror links at a press conference here today.

The Bangalore police and sleuths of the Internal Security Division of the State police on Thursday 8th of January, had arrested three men in the city hailing from the coastal town of Bhatkal in Uttara Kannada district, claiming to have busted an alleged terror module.

The police had also claimed that they had seized huge cache of explosive substances, including ammonium nitrate, detonators, electronic timer devices, digital circuits, circuit-making materials and fuel oil from the house of the accused.

Advocate Akmal Rizvi of Association for the Protection of Civil Rights (APCR), who is handling the case of Saddam Hussein and Abdus Saboor said that the manner in which the recovery was done, raises several doubts since the relatives who were present and requested that the mahazar (panchanama) be done in their presence were not allowed to go anywhere near the house, and some plain clothes policemen entered the locked house with some packets and then exited the house claiming to have recovered explosives.

According to his parents, Dr. Afaq is married to a Pakistani national and is a homeopathic doctor. He came to Bangalore with them on 8th of January from Bhatkal along with his cousin Abdus Saboor, a MBA student.

He left his house in Cox Town, Bangalore with his brother Abdul Azeez and cousin Abdus Saboor at around 10 AM. According to Abdul Azeez, a vehicle with six persons stopped the trio and pushed them in. They were taken to the interrogation centre in Madiwala. Azeez, who was later released after questioning, said that he was made to sign on a arrest intimation in respect to Dr. Afaq and Abdus Saboor.

The family claims that on the same day at around 2 PM, 7 men in plain clothes came to their house and took away a laptop, two mobile phones, a Cisco router and even a toaster. However, according to police accounts, they found “incriminating material,” in Dr. Afaq’s house.

It should be noted that police claimed that they arrested Dr. Afaq in his house in Cox town.

The family is living in Bangalore for the past seven years. And Abdus Saboor’s mother was staying in the house, for the past two months to take care of Dr. Afaq’s wife, who had recently delivered a baby.

Similarly, Saddam Hussain, a scrap dealer from Bhatkal, was picked up by plain clothes men on 8th January at 7.30 AM at a bus stand, where he had gone to send the marriage cards of his sister by bus to another town.

Abdus Saboor’s house, according to his parents was locked for the past two months. They alleged that the explosives and other materials found in their house was “planted by the police.”

It is to be noted that in the story published by The Cognate on Friday 9th of January, we had qouted local media sources in Bhatkal, which have reported eyewitness accounts, who claim that the house of accused number 2, Abdus Subur’s house, was “broken into, and the police allegedly unloaded a carton box containing some items from their vehicle and carried inside the house.”

Speaking to The Cognate, the families affirmed that it has full faith in the judiciary and that a fair and impartial investigation will prove that their children will be releaed without charges.

Advocate Sultan Beary, who in the past had successfully fought the case of journalist Muthi-ur-Rahman Siddiqui is handling the case of Dr. Syed Ismail Afaq.