Open Call For Genocide: 'Star Of Mysore' Newspaper Refers Muslims As 'Rotten Apples', Calls For Getting 'Rid Of Them'
Advertisement https://pagead2.googlesyndication.com/pagead/js/adsbygoogle.js 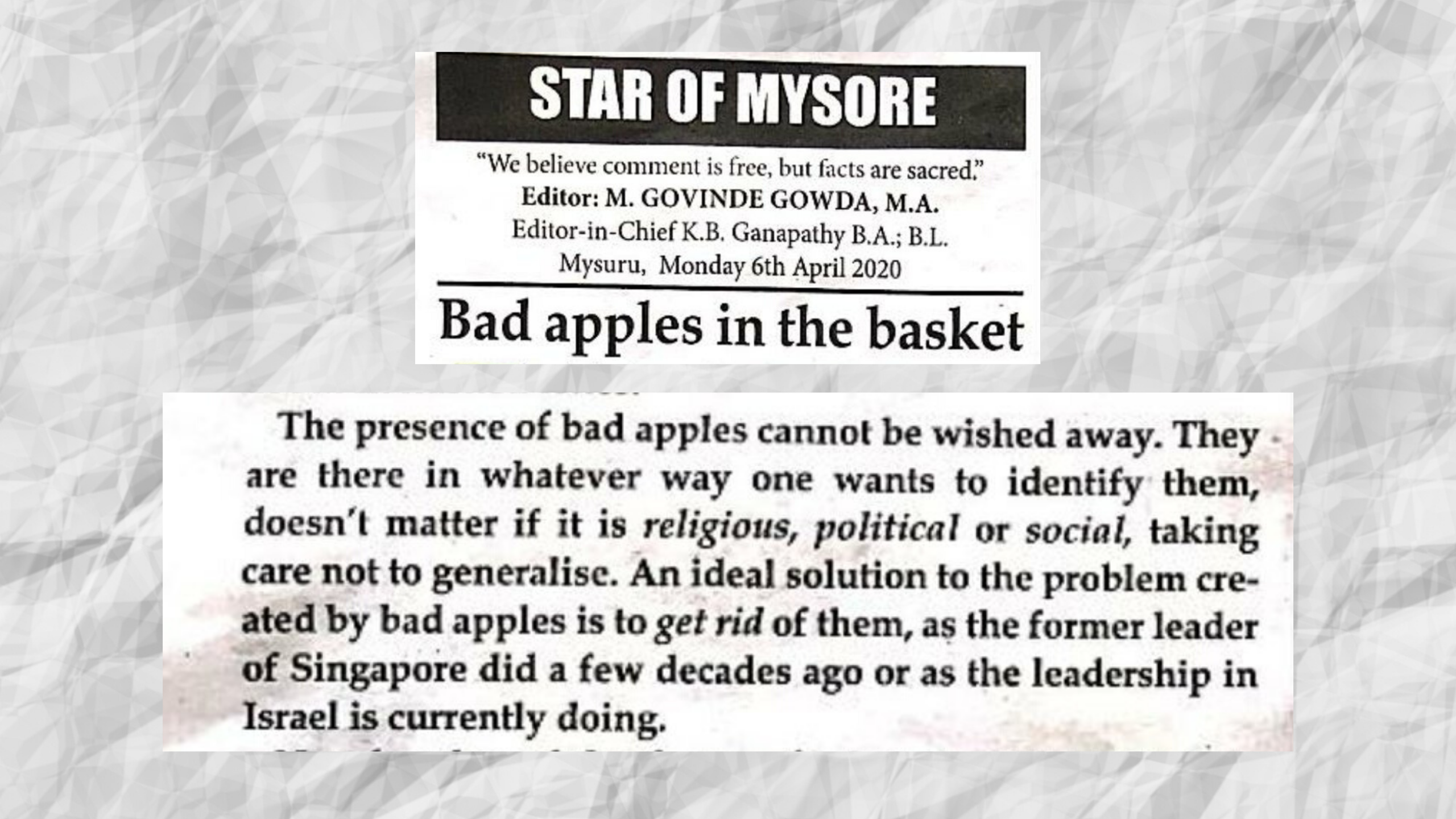 Star of Mysore, a daily evening newspaper from Mysuru in Karnataka has referred to the Muslim community as “bad” and “rotten apples” in its editorial dated April 6th and has called for getting “rid” of the community, enraging its readers and the wider public for its blatant call for genocide against the community.

The article titled, “Bad apples in the basket“, written by the editors of the newspaper Govinde Gowda and KB Ganapathy, starts off by praising a “section” of Indians for what it calls “complying with the pleas of the Prime Minister”, and then goes on to denounce another “section” for what it calls as their “unedifying conduct marked by their faith and other features including their attire may bring to our mind the analogy of bad apples in the basket. Referred to as a rotten apple, a bad apple is a negative person who infects those around him with his bad influence.”

Leaving no doubt who they targeting, the authors write that the “nation is currently hosting an annoying 18 percent of its population self-identifying as rotten apples. More worrisome is the presence of bad apples even among the functionaries in the Government, a fact that is talked about in hushed tones.”

The newspaper then goes on to say that the “ideal solution” to the “problem created by bad apples is to get rid of them, as the former leader of Singapore did a few decades ago or as the leadership in Israel is currently doing.”

Although no police action has been taken against the newspaper and its editors for so overtly calling for a genocide of a community, the article has generated a severe backlash, with many calling for the editors’ arrest.

Why can he booked for making such comments? Freedom to write doesn’t mean you can write anything. (1/n)

On April 6th, an editorial in an English daily called the Star of Mysore – edited by KB Ganapathy- made a Nazi style, barely camouflaged call for the genocide of Muslims in India. No action whatsoever has been taken. Just another normal day for the Indian media. pic.twitter.com/b1KGFwpJWB

The article, now removed from the paper’s website, can be accessed through its cache.

Ever since Delhi’s Markaz Nizamuddin emerged as a coronavirus hotbed after numerous people who attended a Tablighi Jamaat meet in mid-March tested positive for the viral infection, there has been a swathe of fake and malicious news published against Muslims, leading to attack against the community across the country.

Last week, a video of a group of people attacking two Muslims with sticks and irons rods in Karnataka’s Bagalkot district went viral on social media. The attackers could be heard saying: “You people (Muslims) are the ones who are spreading this disease… Don’t touch them. They are the ones spreading the disease.”

In this article:Featured, Indian Muslims, Muslims, Star Of Mysore