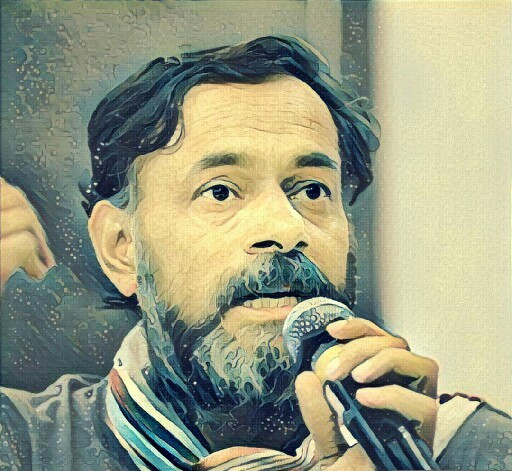 Bengaluru: BJP’s victory in the Lok Sabha elections, and Congress’s “wipeout”, has left a political vacuum, and it’s an opportunity for alternative politics as espoused by Aam Aadmi Party (AAP) to provide a viable, and energetic hope to the country, said well-known psephologist and AAP leader Yogendra Yadav here on Wednesday.

Prof. Yadav who was speaking on the topic of ‘Alternative politics : Challenges & opportunities’ in the city’s St. Aloysius Degree College, said that it’s time to look beyond, traditional parties like BJP, Congress, JD (S) and others, who he called as ‘Most loyal to regimes of corruption’ — a wisecrack reference to ‘Her Majesty’s Most Loyal Opposition’ in the UK.

Speaking on “secular politics”, he said that the old style secular politics was “bogus.” It was an act of keeping minorities, especially Muslims hostage. “There was a contract between these parties and Muslims; the contract was we provide you security, but don’t ask us anything else. Don’t ask us about education or employment. After Muzaffarnagar that contract was busted.”

“One thing is very clear (from the electoral defeat faced by Congress in Lok Sabha and assembly elections in Maharashtra and Haryana) that Congress may cease to exist as a nationwide opposition in next four to five years,” he said.

Prof. Yadav said whenever the Congress has fallen below 20% of the electoral votes in states in the last two decades, it has never been able to bounce back. “Tamil Nadu, West Bengal, Uttar Pradesh, and Bihar tell us the same story.”

Diving more on the 2014 Lok Sabha elections and Narendra Modi’s ascension to power, he said that Modi, addressed three of the most significant anxieties of the country — Governance, economic growth and cultural identity.

“With the UPA government, people did not know who the decision maker was; there was no confidence in the leadership, and Congress, perhaps, for the first time in history had annoyed both rich and poor, Modi addressed this hollow vacuum,” he said.

However, Prof. Yadav cautioned, saying while it is vital to address the aspirations of the people, Modi also rekindled the fire of Cultural identity.

“He stoked and fed it,” which, Prof. Yadav said was against the idea of India.