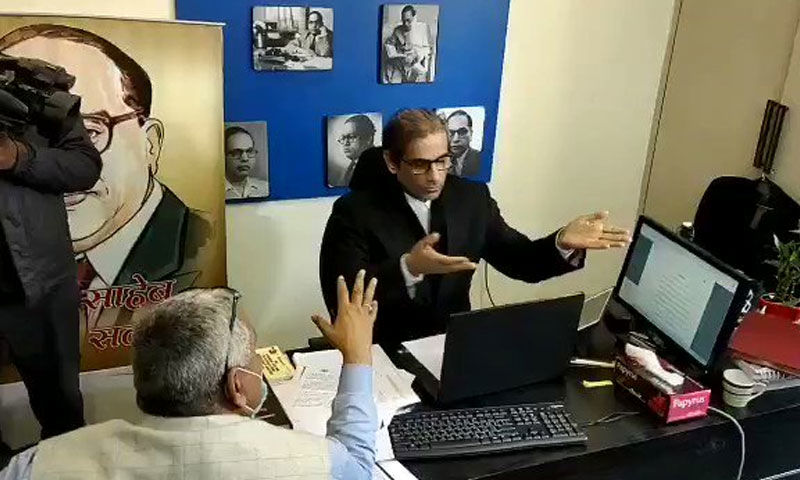 The Special Cell of the Delhi Police on Thursday raided the office of lawyer Mehmood Pracha, who is representing many accused in the northeast Delhi riot cases.

The Delhi Police has reportedly said that the raid was based on a warrant from a local court to search for “incriminating documents” and “metadata of outbox” of the official email address of Pracha’s law firm.

According to The Wire, the 50 member police team led by inspector Sanjeev of the Delhi Police’s special cell, had brought two laptops and a printer with them and hacked into Pracha’s computer which contains case details.

According to Pracha, this seizure is against the Advocates Act and the privilege which is accorded to an advocate-client relationship under the Indian Evidence Act, 1872.

Pracha’s colleague said Pracha would be lodging a complaint with the local police regarding this matter.

In a video of the raid posted in Twitter by Quint journalist Aditya Menon, Pracha is seen objecting to the seizure of his laptop by the police, citing client-attorney privilege.

"This is in violation of the order": Advocate @MehmoodPracha tells police regarding seizure of his office computer and laptop https://t.co/5RnLeU4pIg pic.twitter.com/L0Z1YdNvLi

The lawyer is seen saying that the police may examine the laptop but cannot seize it as it will amount to breach of attorney-client privilege. Pracha is also seen telling the policemen that seizure will be in violation of the court order. The police officer in the video is seen replying that he wants to take the ‘hard drive’ of the laptop.

According to The Quint, the search warrant order, issued on December 22, reads as: “Whereas information has been laid before me of the commission of offences punishable under section 182, 193, 420, 468, 471, 472, 473, 120B and it has been made to appear to me that incriminating data comprising false complaint and meta data of outbox of email account which was used to send incriminating documents are essential to the investigation of FIR 212/20 of Police Station Special Cell, New Delhi. This is to authorize and require investigating officer of this case to search for the said incrementing documents and meta data of out of box of email ID, wherever they may be found whether in computer or in the office/premises of Sh Mehmood Pracha.”

Pracha represents several of the accused in the Delhi riots cases, including student activist and community organizer Gulfisha Fatima who has been charged under draconian UAPA. Pracha earlier represented Bhim Army chief Chandrashekhar Azad in the cases related to anti-CAA protests.