Not Just 'Pakistan Zindabad', Student Activist Amulya Had Said 'Zindabad To All Countries' On FB Before Being Detained For 'Sedition'
Advertisement https://pagead2.googlesyndication.com/pagead/js/adsbygoogle.js 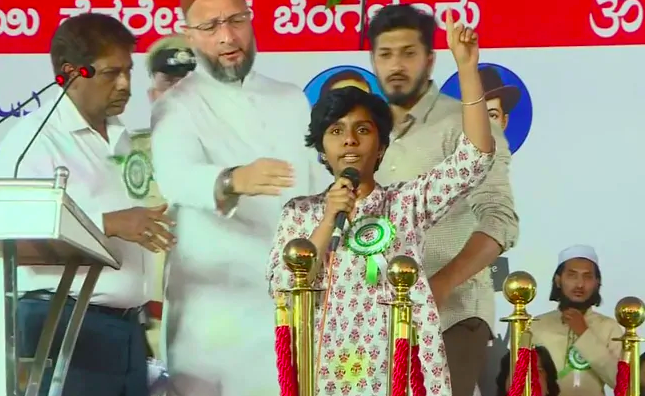 Amulya Leona Noronha, the 19-year-old firebrand student activist who was detained by the police for shouting ‘Pakistan Zindabad’ at an anti-CAA rally in Bengaluru has been remanded to 14-days judicial custody. Besides section 124 (a) of the Indian Penal Code (sedition), the Bengaluru police have also booked her under sections 153 A and B of the IPC for (promoting enmity between different groups and imputations, assertions prejudicial to national integration).

Ever since the protests against the Citizenship Amendment Act (CAA) and the National Register of Citizens (NRC) began, Amulya had become a prominent name among protestors, travelling across Karnataka to deliver fiery and passionate speeches against the contentious act. A student of journalism, she was among the three women who asked Mahesh Vikram Hegde, founder of fake news website Postcard News, to sing Vande Mataram at Mangaluru airport in January this year. She was invited almost everywhere, including to the rally on Thursday where Hyderabad MP and All India Majlis-e-Ittehadul Muslimeen (AIMIM) Asaduddin Owaisi, was the main speaker.

Amulya, who took the mic to speak at Thursday’s rally, shouted ‘Pakistan Zindabad’ thrice, putting the organisers and MP, Asaduddin Owaisi in a fix. Within seconds, Owaisi and the organisers rushed to her and snatched away the mic from her telling her that she cannot say such things. An unperturbed Amulya continued her speech by chanting ‘Hindustan Zindabad’.

“Please wait, let me continue…the difference between ‘Pakistan Zindabad’ and ‘Hindustan Zindabad’ is…” Leona was saying before she was interrupted and dragged off the stage by the police.

Her unwarranted sloganeering took everyone by surprise, but her Facebook post, dated February 16, gives an indication of what she might have wanted to convey if she hadn’t been dragged off the stage. In her post, written in Kannada, she praised all the neighbouring countries, including Pakistan and wrote about love for one’s own country and respect for other nations.

Whichever country it is – zindabad to all countries.

You teach the children that the nation is its soil. We children are telling you – nation means it is its people. All people should get their basic facilities. All of them should be able to avail their fundamental rights. Governments should take care of the people of these countries. Zindabad to everyone who serves the people.

I don’t become a part of a different nation just because I say zindabad to that nation. As per law, I am an Indian citizen. It is my duty to respect my nation and work for the people of the country. I will do that. Let us see what these RSS Chaddis will do.

The Sanghis will get annoyed by this. Start your series of comments. What I have to say I will say.”

Amulya’s envious energy and conviction to fight for a just cause, had made her one of the many voices of the growing movement against CAA and NRC. But her attempt to deliver fervent speeches seems to have got the better of her, which was only intensified by an unorganised rally and clueless organisers, who did not give her a chance to explain herself.