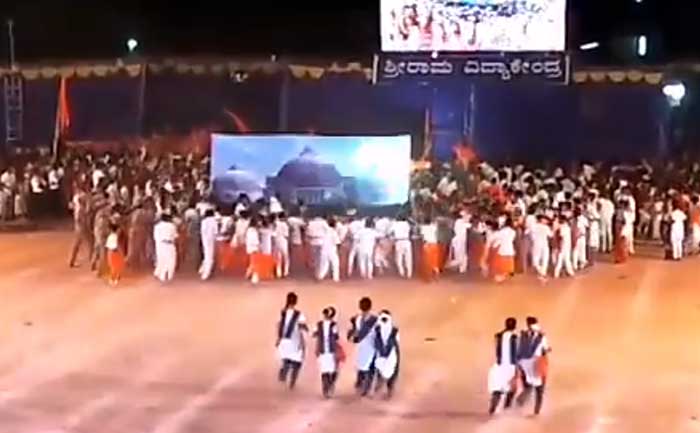 The RSS is preparing the next generation of Hindu extremists, and the event organised at a school by one of its leaders is proof of it.

A group of students of classes 11 and 12 of the Sri Rama Vidyakendra High School in Kalladka district of Karnataka was made to enact the 1992 demolition of Babri Masjid on December 15. In a video going viral on social media, at least a hundred students, dressed in white shirts and saffron dhotis are seen charging towards a poster of Babri Masjid. The students are seen demolishing the poster of the masjid and building a Ram Temple in its place.

The school is owned by RSS leader Kalladka Prabhakar Bhat and the training event was attended by Union Minister of Chemicals and Fertilizers, DV Sadananda Gowda, Puducherry Governor Kiran Bedi and several ministers from Karnataka.

Another formation d school children made was of the proposed Shri Ram Mandir at #Ayodhya. All such performances enabled d school ensure all of its 3800+ school children participate in d annual festival of Sri Rama Vidya Kendra, Kalladka Village, near Mangalore @PTI_News @ANI pic.twitter.com/IdaoySuBY4

Kalladka Prabhakar Bhat, who is a member of the south-central regional executive committee of the RSS, defended the training enactment staunchly. “It is not a mosque,” he was quoted as saying. “It is just a building. It is a historical event that we are depicting. We have depicted Jallianwala Bagh as well. Did anyone highlight that? Even though the Supreme Court has said that what happened in Babri was wrong, we have questioned that part of the judgment itself…I don’t agree with it,” a report by The News Minute quoted him as saying.

The extremist training event was heavily criticised by people, and said that the situation in the country is “beyond redemption”.

A school in Karnataka run by RSS enacts Babri Masjid Demolition with children.

Scary and nation is beyond redemption.

When you brew animosity terrorism is they by product.

IF YOU NEEDED ANY FURTHER PROOF OF BIGOTRY AND HATE IN INDIA, JUST READ THIS REPORT. AND THE RSS IS THE BOSS OF BJP!!!

WHAT ACTION WILL BE TAKEN?

Check out these visuals from a school in Karnataka, run by an RSS leader, where they have little children enacting the demolition of Babri Masjid. I'm shocked!

This is also because our judiciary failed to punish the perpetrators & do justice.pic.twitter.com/enTXylG1bJ