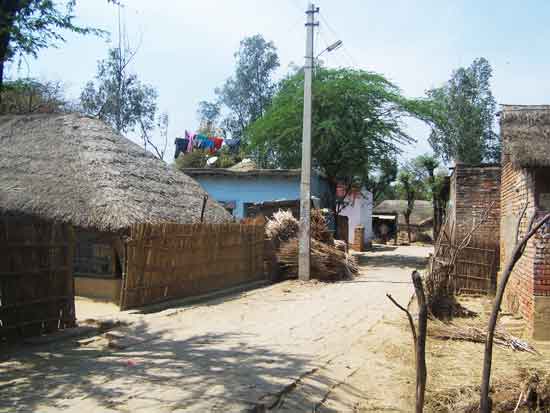 Muslim youths in Uttar Pradesh’s Khaira Bazar village have reportedly fled the area fearing arrest after the police falsely booked close to 200 people of the community under the draconian UAPA law in connection with a communal clash on October 20.

According to an Indian Express report, a clash broke out on October 20 while a procession for Durga idol immersion was passing through the village. A local resident, one Ashish Kumar Shukla, who was part of the procession, lodged an FIR against 80 men – all Muslims – and several unnamed people. In his complaint, Shukla alleged that the accused attacked the procession using swords, pistols, and bombs, injuring about 60 people.

Ravindra Kumar Singh, the additional superintendent of police, Bahraich, said that so far over 70 Muslim youth have been identified as being involved in the incident. “It was confirmed after scanning eight videos from locals,” Indian Express quoted him as saying. When questioned why no Hindus had FIRs against them, Singh said there was no evidence of a clash between the two groups and in the videos that officials have obtained, “people in the procession are only seen chanting ‘Jai Shri Ram’ and not being involved in violence.”

However, as per a recent fact-finding report by members of the Rihai Manch and Nationl Confederation of Human Rights Organisation (NCHRO), the incident took place on October 20, when a procession of more than 200 people were taking out a ‘Shobha Yatra’ and threw colour inside the mosque premises and on people standing in front of the mosque.

The fact-finding team which visited the area on October 28, found the enaction of UAPA and other laws unnecessary in this case and poke many holes in the FIR. They claimed that the complaint was prepared even before the incident took place.

“The FIR does not mention the time of the incident but it mentions the time of the filing of the complaint. The complainant named 80 Muslims in the FIR besides 100-200 others as unknown but he mentions names of only three persons from the procession as injured and 50-60 other injured persons as unknown. The FIR has nothing that warrants invocation of UAPA against the accused,” the group said.

In the report, Rihai Manch president Adv. Mohammad Shoaib said, “After a cursory look at the FIR, the incident seems completely doubtful. The complainant has not written the time of the incident, yet FIR says the incident took place at 00:00 clock on 20 Oct and it was registered at 21:38 PM. The local police and communal elements jointly prepared this fake report. FIR names 80 people and 100-200 as unknown which does not seem believable. If 250-300 people had hidden themselves on a village road to attack a Hindu procession, they would have been noticed. Ashish Kumar Shukla names 80 people out of 250-300 but mentions names of only three persons who got injured and forgets 50-60 other injured. The person who does not remember injured members of his own procession, how can he remember 80 names from the other side? This proves that those named as accused in the FIR were already identified and marked by them.”

Rihai Manch stated that this whole incident was concocted to show Muslims as anti-national and terrorists.

According to the Express report, the police have now accepted that the UAPA was invoked wrongly and that they will drop it from the FIR. “We are now invoking Criminal Law Amendment Act,” they were quoted to have said.

Only 2.2% Of Cases Registered Under UAPA From 2016-2019 Ended In Conviction: Government Tells Rajya Sabha